The same sex marriage postal survey results have returned a “yes” result, the Australian Bureau of Statistics has announced.

The ABS’ David Kalisch announced the result at 10am on Tuesday, 15 November.

The news comes following a tumultuous campaign period, with reports that mental health groups had to deal with an increase in demand for their services.

Uniting Church New South Wales Moderator Reverend Simon Hansford has called for “members of our church to continue to pray for each other after what has been a very difficult process.”

A joint letter signed by Uniting Church President Stuart McMillan and all Moderators called for church members to engage with the issue with compassion.

“Whatever the result of the postal survey, many people in our community will feel hurt, some deeply,” the letter read.

Reverend Dr Margaret Mayman is Minister at Pitt Street Uniting Church and the Chair of Australian Christians for Marriage Equality.

“Australians from all walks of life have voted for equality and dignity, including people of faith,” she said.

“Christians support marriage equality because of our faith, not in spite of it. At the heart of Jesus’ message is the command to love our neighbours, without discrimination. That’s why Christians have voted Yes to Equality.” 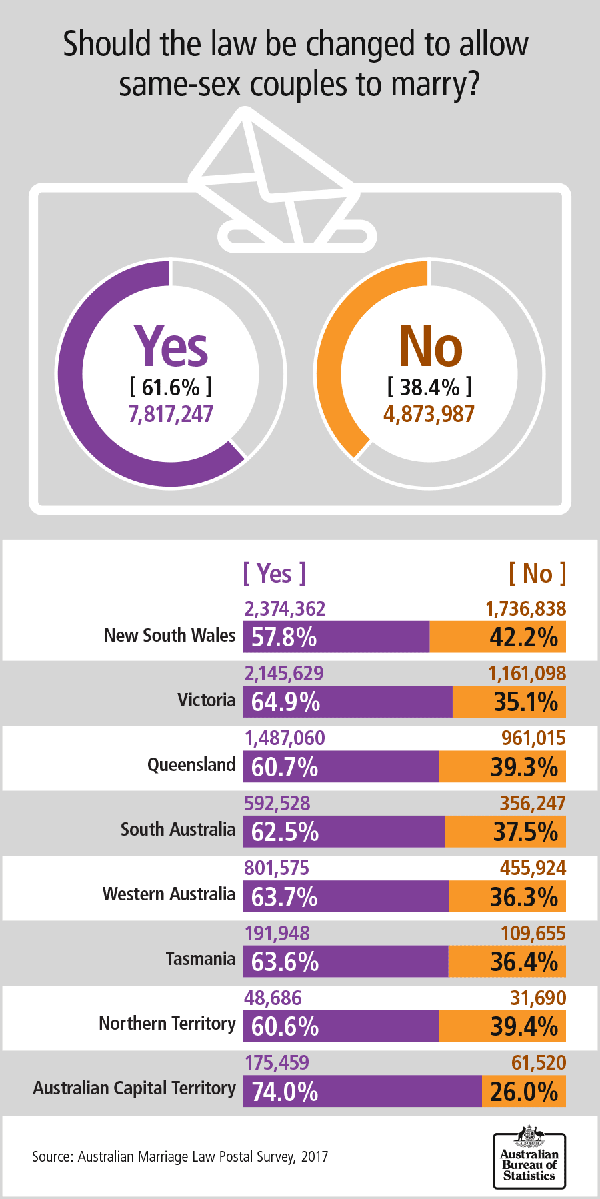 With Liberal Senator Dean Smith vowing to introduce a private members’ bill on Thursday, legislation may not be far behind.

Prime Minister Malcolm Turnbull  told journalists in Canberra that there would be a vote on the matter in parliament before Christmas.

“The Australian people have had their say and they have voted overwhelmingly yes for marriage equality,” Mr Turnbull said.

Both houses of parliament return on 27 November and will sit for two weeks.

For same sex marriage to take place in Uniting Churches, the church would need to change its definition of marriage and develop a new liturgy.

The ABS website has a breakdown of results in more detail here.

PrevPreviousAl Gore continues to be inconvenient a decade on
NextCelebrating a milestone: Moree Uniting ChurchNext