Poverty and the will to survive writ large in Maid 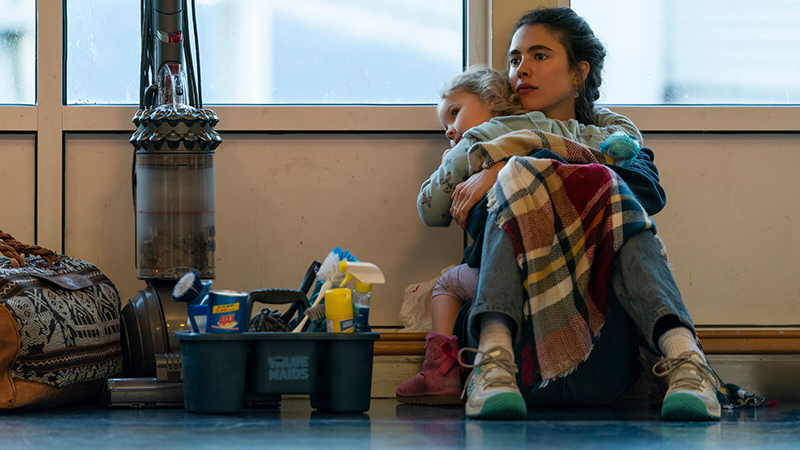 The stark realities of living below the poverty line, cleaning toilets, fleeing domestic violence and a less than stellar family of origin, are all writ large in the Netflix limited series Maid.

As the ultra-violent Squid Game has worked its way up to the most-watched show on the streamer and given a front seat to the poor being exploited by the rich in a literal battle to the death, Maid made its way onto Netflix with little fanfare, but is a far more emotional journey and is essentially in the same space – the yawning gap between the very rich and those who clean their houses.

We take the front row seat and look at life on the poverty line, with the adaptation of Stephanie Land’s memoir, Maid: Hard Work, Low Pay, and a Mother’s Will to Survive. We follow Alex (Margaret Qualley), and her daughter Maddy through what could have been tough going for ten 50 minute episodes in this limited series. But it’s a credit to the producers (one of whom is Australian actor Margot Robbie) directors and stars of this series that this journey is profound, heartfelt and ultimately full of hope.

Just as Alex gets a break after escaping from her emotionally abusive husband, the rug is pulled in spectacular fashion as she navigates welfare, domestic violence housing, her undiagnosed bipolar mother, Paula (played by Qualley’s real mother, Andie MacDowell), her former alcoholic father and assorted other people in her life. Alex is a creative writer, and sees a scholarship and entry into college in her future – but over the ten episode arc faces seemingly insurmountable challenges to make this dream a reailty.

There are some genuinely gripping episodes from a collection of directors as the story is told with the camera focussed carefully on Alex. In every scene, we experience her life, her despair, her lack of money (appearing graphically on screen and disappearing as she pays for groceries and petrol), and her flashes of memory and childhood trauma. This kind of storytelling — for instance, one scene where Alex feels so overwhelmed that she hears a lawyer basically saying “legal” over and over – could have been gimmicky, but it disarms rather than distracts, making the viewer feel as overwhelmed as Alex.

The character studies of the houses Alex clean give you insight into the good Samaritans in her midst as well as her understandable reticence to accept help and feel like a charity case.

Maid is careful in how it details each step of Alex’s attempt to escape poverty, so that small acts of kindness become flashes of hope — a small job going well, a friend opening her door without judgment, a lawyer offering to represent her for free —  becuase of their signficance all land with thunderbolt force. Have tissues handy as much for the happy parts as the sad.

As one of Alex’s first housecleaning clients Regina (Anika Noni Rose), a wealthy attorney who is in the process of adopting a child says to her – “Work is the one thing you can count on. Everything else is fragile.”

All 10 episodes of Maid are now streaming on Netflix.