Home
Reviews
Big Screen
One for the fans

One for the fans 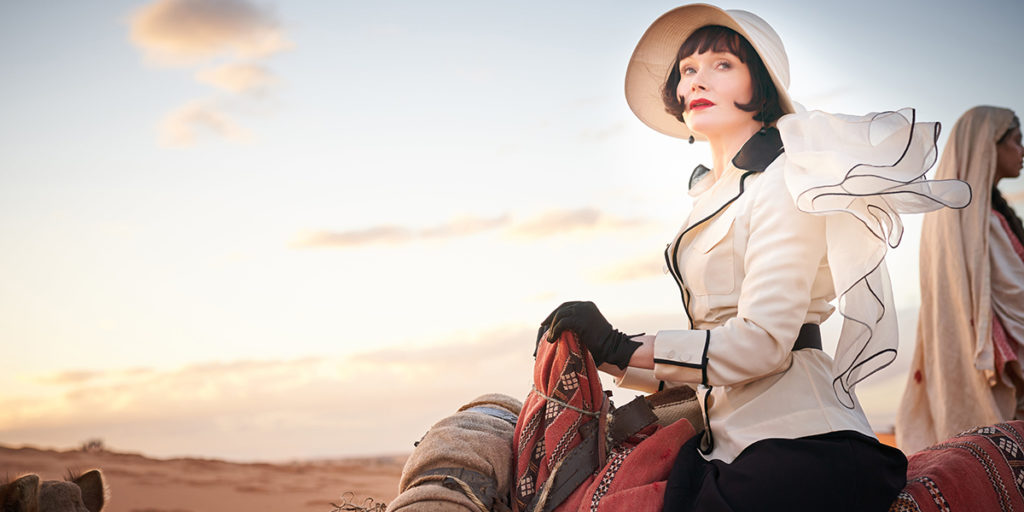 Review: Miss Fisher and the Crypt of Tears

Miss Fisher Murder Mysteries has managed to build an international following since author Kerry Greenwood’s characters were brought to life. Due to the success of the television series, there had been rumours of a full-length feature film. Then the production team started a self-funding campaign to bring Phryne Fisher (Essie Davis) from the small screen to the big screen, the game was afoot. This fan-favourite and fan-funding project took a few years to come together, but now fans can celebrate their favourite private detective coming to theatres.

After three seasons of solving mysteries around the world, Phryne Fisher’s latest adventure begins in Jerusalem in the 1920s. She has been sent to break Shirin Abbas (Izabella Yena), a young Bedouin girl, out of prison. Then Phryne must assist her in unraveling the mystery behind the death of her family and village. After the jailbreak, the two women do all they can to stay ahead of the local authorities. Miss Fisher manages to save Shirin from being captured, but the couture dressed detective disappears and is feared dead.

The news travels quickly throughout the Commonwealth and Miss Fisher’s friend and love, Detective Inspector Jack Robinson (Nathan Page) decides to attend her memorial in England. While in Britain, he realises that his free-spirited partner is alive and has the information that will help them solve the mystery of the Crypt of Tears. Their investigation leads to clues that point them to hidden jewels, decades-long secrets and multiple murders. They must work together with English authorities to unearth the truth behind the deaths and supernatural impact of the stolen emerald of Shirin Abbas’ village.

To all of the faithful followers of the best-dressed detective in television history, this film offers the next chapter they desire from this quirky set of characters. An Australian production that manages to capture the beauty of the lands they travel through during this international adventure. A story that proves that practicality and reality do not need to be included in a fictional depiction of a murder mystery. The movie for the devoted followers who enjoy pure escapism and watching pretty people as they live through a re-imagined 1920s.

For those who are engaging with Miss Fisher for the first time, there is value to watching a few episodes of the television show prior to seeing this film. This exercise might help to understand the plotholes that exist for anyone that is not familiar with the original storyline. Watching the show may also provide excuses for the quality and writing of this production. Even though the cast seem committed to their roles, the overall look and feel of this film never rise above a cinematic episode of Miss Fisher Murder Mysteries. As they attempt to capture a Raiders of the Lost Ark vibe, the writing keeps the whole affair in a predictable package that is reminiscent of its televised heritage. The screenplay includes modern constructs and themes that seem better placed in 2020 than coming from the mouths of those living in the 1920s.

Miss Fisher and the Crypt of Tears is a tale for those who can look beyond the quality issues and merely want to see their favourite characters on the big screen. A beautiful film with great costuming that hopes to use these elements to cover up the anemic and less-than-original script. An experience that gives devotees an excuse to dress up in the attire of days gone by and live out a fantasy depiction of that era, while encouraging new viewers to go back and binge watch the series.

How do people determine right and wrong in a world of ‘grey?’

Besides relying on mere intuition and personal conjecture, the search for the answer to this question is complicated. Some may look for answers in science, philosophy and religion, but how can people know where to find the answers to the ethical and moral queries?

Through this journey of inquiry, the Bible is an excellent source to consider. The wisdom found in the words of this book does not give specific answers to every situation that comes along. Still, it offers a framework to know how to make the right decision, and it even provides solutions to life’s more prominent considerations. In this investigation, the best places to start are in some of the books of wisdom in the Old Testament (Psalms and Proverbs) or the book of Romans in the New Testament.