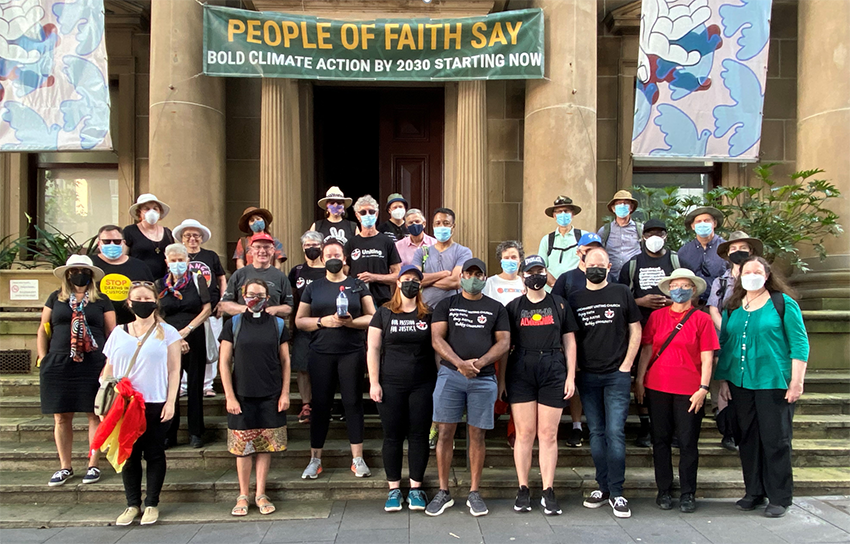 On 26 January 2022 a group of about 30 people from the Uniting Church and Uniting marched from Town Hall to Victoria Park in Sydney, to show solidarity with First Peoples.

I would like to thank Rev. Josephine Inkpin, and the Pitt Street Congregation, for kindly opening up Pitt Street Uniting Church for us to use the facilities before the march.

While we know that many individual Church representatives have marched previously, I think this was the first time a group had marched together. While we were a small presence, we were noticeable in various UCA t-shirts. It was great to see so many friends and colleagues turn up to show their support. Many people told me they would have liked to join us but were concerned about covid, and a couple of people had been taken down with covid the week before the march, but we know they were with us in spirit. Hopefully next year we will not still be dealing with Covid and can get a bigger contingent together!

After gathering on the steps of Pitt Street Uniting we made our way to Town Hall. The crowd was huge, I would estimate around 5,000 people. We heard several passionate and emotional speeches, including hearing from the relatives of a number of people who had died in custody. We heard their anguish and grief. We heard the anger and frustration that despite the deaths of 500 Aboriginal people in custody since the Royal Commission into Aboriginal Deaths in Custody Recommendations were released in 1991, not one person has been found guilty of criminal conduct in relation to the death of an Aboriginal person in custody.

We heard about David Dungay, who was in the prison hospital at Long Bay, who was eating a packet of biscuits in his locked cell. We heard that because David refused to stop eating the biscuits, he had 5 prison guards enter his cell and hold him face down while David desperately told them he couldn’t breathe (there is video evidence of this). David died as a result of being restrained by the guards in his cell – he couldn’t breath. One of David’s relatives said: “The biscuits were never going to kill him… but the guards did.”, and that “He was meant to be in the hospital to receive care, but instead they killed him.” None of the guards involved have yet been held accountable for their actions. David’s relatives have now been forced to take the matter to the United Nations in an effort to see justice done.

After the speeches, the march commenced. The first part of the march, to Australia Hall, was a silent march to pay respects to those who organised the original 1938 Day of Mourning protest and those who had passed. Our group joined the march towards the tail end, which we did deliberately as we were simply there to march in solidarity and show our support for First Peoples. The march went up Park Street and onto Elizabeth Street, and stopped for more speeches at the Australia Hall. Unfortunately, as we were towards the rear of the march it was difficult to hear the speeches, but that didn’t matter. When the crowd ahead of us clapped, those of us towards the back clapped too.

After the speeches at Australia Hall, we proceeded down Elizabeth Street, then right down Eddie Avenue, and then left towards Broadway. With the silent march completed, there were then many spirited chants by the crowd as we walked: “No Justice – No Peace”; “You say accident – We say murder” (relating to deaths in custody); “Too many coppers… Not enough justice!”; and, “What do we want? Land Rights! What do we get? F@#k all!”.

We continued to march with the crowd along Broadway until we reached Victoria Park. It was a peaceful event, and even though heavily policed, the march seemed to proceed without any incident. A group of about 10 of us then rendezvoused outside Foyer Central on City Road and had a quick debrief. Everyone expressed that they were glad they participated and looked forward to marching again next year. We then headed across the road to Yabun in Victoria Park.

A few of us happened to bump into Rev. Bill Crews at Yabun and stopped to have a yarn (Bill was one of the earlier speakers at Town Hall).

After the march I received a text message from Raul Bassi (organiser) thanking us for our assistance and involvement in the event. We look forward to continuing to build our relationship with the organisers of the event and supporting the march again next year.

Thank you to Jon O’Brien and the Uniting Advocacy Team, and to Gavin and Shane from Uniting’s Aboriginal Strategy and Engagement Unit, for your assistance in helping organise the event. Thank you to all those who came along on the day – it was wonderful to see our Church represented in the march, and I look forward to joining our group to march again next year!

PrevPreviousFebruary: Moving beyond our comfort zones
NextCould You Survive on the Breadline?Next