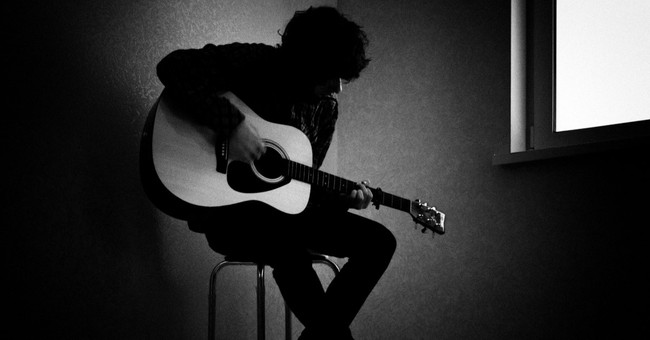 This year sees the thirtieth anniversary of singer/songwriter/producer Mark Heard’s final album and subsequent death of a heart attack at only 40. Chicago-born Heard was discovered by legendary singer Larry Norman. His first album, Appalachian Melody, released in 1979, featured the popular song ‘Castaway’, and a roots rock and folk feel that has a prettiness typical of the burgeoning Christian popular music released in the era, such as Amy Grant’s early work.

Heard recorded five albums in the 1980s that mixed the sounds of the likes of John Denver and the Grateful Dead, but, like many, he found that the record industry compromised his art. In particular, he received pressure to make his songs more explicitly Christian, counter to the honesty and complexity of his lyrics, of which the following lines might make a neat summary: ‘The sun still shines/the darkness still falls/we must see both/if we see them at all’.

Later in the 80s he was trying to be more autonomous. He recorded a more experimental and now hard-to-find pop album, Tribal Opera, under the name iDEoLA. The album featured the intriguing song ‘(How to Grow Up) Big and Strong’, which featured on Olivia Newton John’s album The Rumour, which Heard helped produce. He also produced albums by the Vigilantes of Love and Pierce Pettis. Buddy and Julie Miller were admirers and covered his songs after his death, on a tribute album that also featured Olivia Newton John’s cover and tried to bring Heard’s talent to a wider audience.

Heard made an impact with his final trilogy of albums in the early 1990s. Perhaps building on the momentum of more forceful alt-country from the likes of Kevin Welch, these albums are particularly exquisite, moving from more intimate numbers on Second Hand to the electric mandolin-led songs on the final album Satellite Sky, which has all the momentum of the E Street band, the roots rock complementing the lyrics about deserts and highways and the night sky prompting existential questions.

Like Bob Dylan, Heard was well-read, his mastery of the richness of language evident. Like Dylan, Heard’s songs feature a relentless barrage of pregnant phrases twisted and polished. Unlike the Praise and Worship genre’s largely lazy, paint-by-numbers use of stock biblical phrases, Heard reworks them cleverly, such as his use of Ezekiel in the song ‘Dry Bones Dance’, where we are transported to a strange contemporary setting, a fractured, solipsistic world (‘everyone surrenders to the brave new scarecrows’) in which Heard longs for the miraculous.

‘A Broken Man’ (‘outcast on the outskirts of the promised land’) is hardly triumphant fare, but is honest about human failure, loneliness and fear, as well as perhaps expressing just a little where Heard sat – admired by many, but uncomfortably on the margins of the Christian music industry. ‘Hammers and Nails’ is more forceful, with its galloping 6/8 rhythm and foghorn saxophone, the lyrics pointing to rescue – ‘your love/never can fail/to pierce me/hammers and nails’.

On the subtle and gentle ‘Nod Over Coffee, a kind-of title song of his second-last album, Heard sings about how we are prisoners of time, how golden moments, snatched before we are swept back into the river of time, are tainted by the knowledge of their fleeting nature. This is made by more poignant by the fact that Heard was a travelling musician, away from his family for extended periods of time, as well as by the crueller fact of his short life, even if his rich moment in the sun was a gift to music fans.