Home
Reviews
Look at this photograph

Look at this photograph 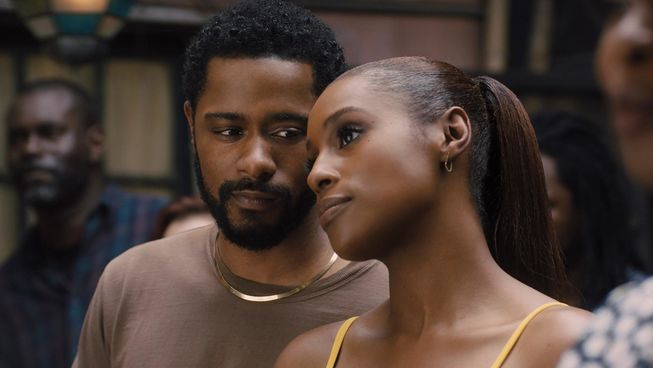 What can be said on the subject of love in movies that has not already been said? This has to be on the minds of studio executives as they look to greenlight the latest production. Especially those projects that try to offer a fresh perspective on the age-old view of the deepest of human emotions. With a stylised manner of moving between the past and the present, writer/director Stella Meghie (The Weekend) hopes to depict the mystery and chemistry that drives the best of romances.

This romantic adventure begins in the post-Hurricane Katrina world of Louisiana. Michael Block (Lakeith Stanfield) is interviewing a local fisherman who was impacted by the storm, but what catches the journalist’s attention is the photographs on the man’s mantel. This is when he is first introduced to the photographic work of Christina Eames (Chanté Adams). An artist who left behind her past life in the South for the energised atmosphere of New York City.

As he tries to discover more about the photographer after returning to the city, Micheal decides to reach out to the curator of the museum who managed her works after her recent death. A woman who turns out to be the daughter of the celebrated artisan. Mae (Issa Rae) is working through the grieving process of losing her mother, but cannot help to feel the chemistry between herself and the inquisitive writer. They both try to come to terms with their undeniable connection, despite having personal and professional situations in their own lives. Scenarios that may prove tricky for them to maintain a relationship. As they flirt with the idea of a simple date, the two decide that the possibilities of going out outweigh the risks. Yet, their pasts may prove too challenging to overcome in starting something new with one another.

Interestingly, this love story has as much to do with Christina’s past as it does her daughter’s life. Stella Meghie’s screenplay attempts to show the complexities of the photographer and the life she is trying to leave behind. It shows that she is a woman who struggles to maintain personal relationships, including the one with her daughter. An aspect of many photographer’s lives, having more connection with those they photograph than with the people in their lives. This becomes a pervasive thread that is woven throughout the story. An aspect of the narrative that moves between the past and the present with a disjointed frequency.

While history plays a part in this relational tale, what matters most is the believability of the chemistry between Michael and Mae. What challenges this aspect of the film is that both actors play their roles with a quiet, understated and brooding determination. Which makes their connection feasible, but surprisingly underwhelming at times. Even though they look great together and seem to have what it takes to make a relationship work, it is the story that seems to push them apart more than bringing them together.

What stands out about this production is the cinematic eye of the director. Maghie delivers beautiful visuals throughout the film that smooth over the rough edges of the dialogue. She manages to capture the dark beauty of New York while capturing the endearing colours of Louisiana. She applies a photographer’s eye to the light and shade of her performer’s aesthetics and emotions which lifts this from your standard love story to a visual spectacle that is worth studying in more detail.

The Photograph does deliver a unique perspective on the romantic drama by interweaving the stories of a woman and her daughter. With a bit of serendipity added in to provide a special twist to each relationship in the film. Still, it is the visual components of this film that makes it stand out and should be up for consideration for all of those couples looking for a romantic date night at home.

Romance was God’s idea, why not enjoy it?

When it comes to romance, the God of the Bible does not usually come to mind as a purveyor of love. Most people inside and outside the Christian faith may think that discovering real romance can only occur outside of the Bible. This is an unfortunate misconception because as the Creator and God of love, it can be said that romance was his idea, too. Sexual, romantic and marital relations were meant for more than merely pro-creation. These physical, emotional and dare it be said, spiritual connections were meant to be celebrated and enjoyed regularly.

From the original creation account to the wisdom literature of the Psalms, Proverbs and Song of Solomon, the word pictures and phrases make for an atmosphere for romance. Like any relationship, God does set parameters for these love connections. Still, within this fun and delightful playground, the Creator of romance does allow for a beautiful atmosphere for the affairs of the heart and soul.

The Photograph is streaming now on iTunes and Google Play

PrevPreviousWith Love To The World Now Available on App Store
NextTrump’s photo op with church and Bible was offensive, but not newNext