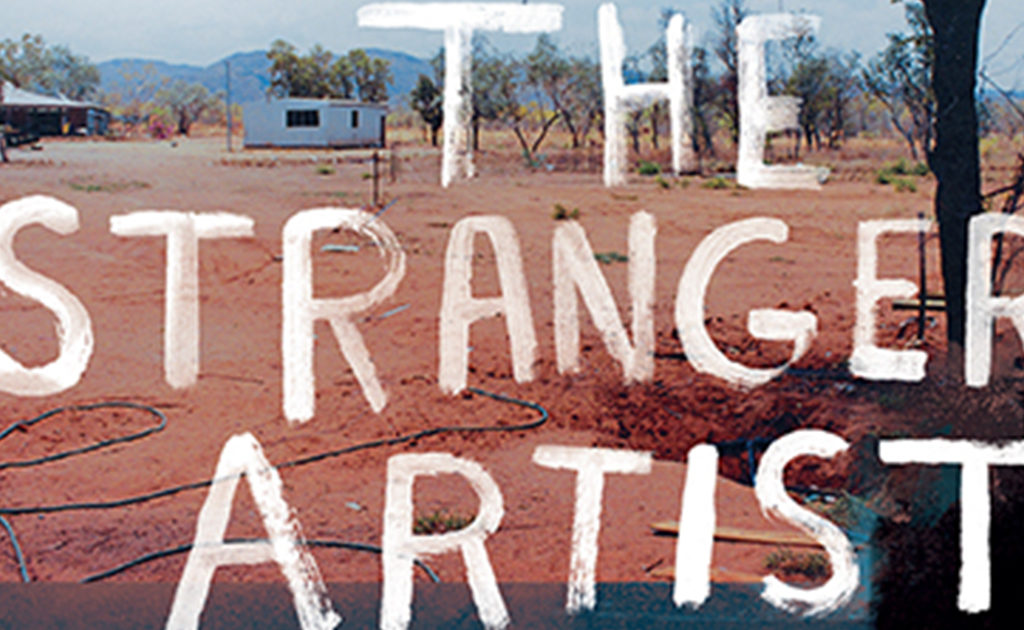 Jirrawun Arts in the East Kimberley was established in the 1990s by Tony Oliver and brought to the world art by the likes of Freddie Timms (arcing lines dividing fields of intense colour), Rusty Peters (grand, abstract storyboards) and Paddy Bedford (assured loops and lines recalling Rover Thomas). The Stranger Artist is the story of how over a decade Oliver, a white, Melbourne gallery owner, conjured the painting collective from the red dust of the Kimberley and the old men’s memories, and was the link between black and white worlds – between Gija and gardiya (kartiya) – encouraging painters, mediating between them and urban galleries and collectors, weighted by the responsibility of tying the two worlds together. Quentin Sprague has done a remarkable job ordering reminiscences and history into this novelistic, sometimes dreamlike, epic and evocative book.

Collectors and critics, as Sprague notes, saw Australian Indigenous art as a bridge between the Indigenous world and late abstract Western art in their similarities of style, even if the ‘core’ was different, writes Sprague. Rover Thomas, Bedford’s predecessor and the most famous of Kimberley artists, when he first saw Mark Rothko’s work, commented on the similarities to his own art. Bedford’s more lurid work recalled Spaniard Joan Miro, and Timms liked Philip Guston. Oliver had exhibited Guston in the 1980s in Melbourne.

But there is more to the work than visual correspondences. In On Being Blackfella’s Young Fella, Aboriginal Anglican priest Glenn Loughrey cautions that seeing Indigenous art as another version of abstract painting is just another colonial imposition – that seeing this art, especially in urban galleries, simply for its ‘beauty’ robs it of significance. Art is part of Aboriginal life and ceremony, a means of telling stories to the community. Indeed, Sprague notes how Rover Thomas was originally recognised when he used painting as part of ceremony. He never intended to become an artist in the Western sense of the word.

As close as Oliver got to the artists – they became friends – he remained ill at ease with his role as conduit and transformer of Aboriginal cultural practice into its Westernised version. The idea of selling paintings for profit was a foreign concept, and there was, and is, a disconnect between the creation of the art and where it ends up hanging. Sprague writes how Oliver sometimes felt like yet another white ‘interloper’.

As an artist himself, Loughrey has trouble with the fact that whites generally have an idea of what Indigenous art should look like – dots and ochre – and get fidgety around Indigenous art from urban areas that doesn’t fit the mould. Oliver had the same misgivings and faced the same prejudice. He was criticised for encouraging a group of teenage girls in the Kimberley to paint (and they turned out paintings somewhat like the graffiti-ridden density of Jean-Michel Basquiat’s work) but found that gallery owners and collectors wanted paintings of the Dreaming and the red centre. Oliver wondered (as does Loughrey), what voices are urbanised, Indigenous young people, sometimes disconnected from Country, allowed to speak with?

The other, positive side of all this, though, is that beyond the obvious fact of the joy of finding great art, Oliver saw that painting could be a way to tell often-ignored Indigenous history widely (beyond the preservation of stories for Aboriginal people), as well as a means to make money and rejuvenate communities, a way of Indigenous people holding continuity in a changing world. Loughrey himself notes that there is no going back to purely traditional ways – Indigenous culture is somewhat hybridised – and the need is to find a way of continuing Indigenous culture in a new environment.

Loughrey’s book deals with the unresolved conflict of being Anglican Christian and Aboriginal, a tension he says he is learning to live with. He writes that he joined the priesthood as a way to feel more ‘white’ and notes that we Christians talk of Jesus washing us ‘white’ and clean, and says, drolly, that ‘white’ is ‘normative’ for Christians. He is often asked about ‘Aboriginal spirituality’ but insists there is no such thing, and that thinking we can abstract spirituality from Aboriginal life is a Western idea, more colonialism. Much of the book is about how Aboriginality is holistic, patterned, cyclic harmonic, in contrast to more linear and dualistic Western thinking, and cannot be compartmentalised.

One might be sceptical of his assertion that rocks have spirits while still agreeing that Indigenous practice may be a positive alternative to Western (post-Enlightenment, I would say) philosophies of the sanctity of private property, endless growth, relentless technological advancement and replacement. While I wouldn’t want to discount his argument that Christianity brings to Aboriginality some problematic Western-centric concepts, there are resonances – the idea of the whole of Creation as under God’s care (and not just for human profit), and the idea of humbly accepting the mysterious, for example.

And we might also be reminded that it is only the non-religious (or lukewarm religious) West that thinks of spirituality as an added extra – originally, churches and synagogues were not an optional Sabbath activity, but a way to reinforce the entwinement and inseparability of the spiritual and the everyday. Loughrey writes about the need to think about Aboriginality on its own terms, and this is provocation enough, but if he also helps us to reconsider Western concepts of spirituality, well and good.