Home
Reviews
Big Screen
How do we explain the unexplainable?

How do we explain the unexplainable? 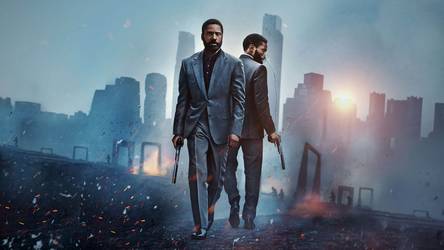 There is nothing like the threat of World War III to grab people’s attention, especially when it comes from the imagination of Christopher Nolan. To fully engage with this story, be sure to allow for a suspension of reality and to let go of everything that you may remember from high school physics, science or philosophy. John David Washington (BlacKkKlansman) is the CIA agent who must quickly embrace the ever-changing atmosphere of a world where time has the potential to operate in reverse. Known only as the protagonist, he must get his mind wrapped around this mind-bending concept while trying to save the world. No small task, since the agent is trying to stop the arms dealing work of a sadistic Russian oligarch played by Kenneth Branagh (Murder on the Orient Express).

Washington’s character is first exposed to the Tenet project after a failed attempt to acquire a nuclear device while on a mission in Russia. He is sent to a special facility to be trained in the art of working with objects that can move backwards through space and time. Technology that comes from the future and mysteriously is under the control of his billionaire antagonist, Andrei Sator (Branagh). A man who is impossible to gain access to except through his art-dealing wife, Kat (Elizabeth Debicki). All of this Sator’s personal information comes to the CIA agent after he is partnered with his handler, Neil (Robert Pattinson) in Dubai.

These two operatives must determine if they can trust one another enough to infiltrate the villain’s organisation and unearth the secret to his innovative technologies. An assignment that leads them on multiple missions that involve working with Kat to discover how to manipulate numerous time continuums. The duo must work within this new reality that includes various timelines where anyone of them could lead to the end world.

One might think after reading this description that this could be the plot of any James Bond or Mission: Impossible film. If that is your assessment, you could not be any further from the truth. Tenet does contain action, a beautiful damsel in distress and an exceptionally evil villain. Still, the majority of this screenplay has few similarities to your standard espionage tale. The project contains logic-twisting timelines of Inception, coupled with a storytelling trope of reversing time that manages to spin this plot around in multiple directions. Leading to an experience unlike anything else in recent cinematic memory and one that may be difficult for people to fully embrace.

In an attempt to fold each layer of the known concepts of philosophy, faith and science into one story, Nolan has made a fantasy that is difficult to enjoy. The unconventional nature of the characters and mind-boggling stretches of reality will make most people leave the theatre wondering what they just endured. Especially asking the question, what is it about Nolan and masks? Reminiscent of Bain in Batman and the pilot in Dunkirk, the actors in this film have to talk under masks at some point. Which means that critical dialogue is communicated behind face coverings, which leads to even more confusion whilst trying to follow the storyline. Maybe it is intended to make people feel better about wearing masks in public, who knows.

Ultimately, Tenet is for the devoted fans of the famed director. An imaginative, sci-fi journey that contains amazing visuals effects, an ingenious, while slightly incomprehensible screenplay, and barrier-bending filmmaking. Like many of Nolan’s other films, this one will be debated and studied for years by film students.

Does that mean it will be the saviour of cinema in 2020?

Who knows, it might be the thing that people need to venture out into public. Warner Bros is certainly hoping audeinces will emerge from lockdown to experience the film on the biggest screen possible. Realistically, this is an expectation that might be too much to ask of this film. The latest outing is a Nolan project through and through, but we are not sure it will appeal to the broader audiences of the world. It will all depend on which alternate reality you find yourself in as you engage with the realities of this post-COVID world.

Like many science-fiction storylines, Tenet manages to delve into the considerations of philosophy, science and belief. Even though many of the characters personally experienced these various realities, it did come down to leaving it to fate or having faith.

Where to start? The Gospel according to Luke.