God does far more than we dare ask or think

What’s the biggest crowd of people you’ve ever sat down to have a meal with? I don’t mean having a pie or hot dog at the footy with 50,000 or more, I mean intentionally sitting down to eat together.

For me it was about 1,500 people. I was in Siena in Italy, for the festival of il Palio, a horse race around the town square where each runner represents a district of the town. In the days leading up to the race itself there are many events including an outdoor sit down dinner held in each district to wish their jockey well. I attended the dinner for the district of Valdimontone, joining with tourists and excited locals. The risotto of sausage, zucchini and fennel was excellent and will be hard to beat as the best massed produced meal I’ve ever eaten!

Tables had been put up in the streets and set with plates, glasses and cutlery. There were lots of huge pots in which the risotto was prepared and a huge number of volunteers serving all the guests their food and drink.

The photo below was taken an hour or so before the event. It was quite a production! Feeding that many is definitely not a simple process. 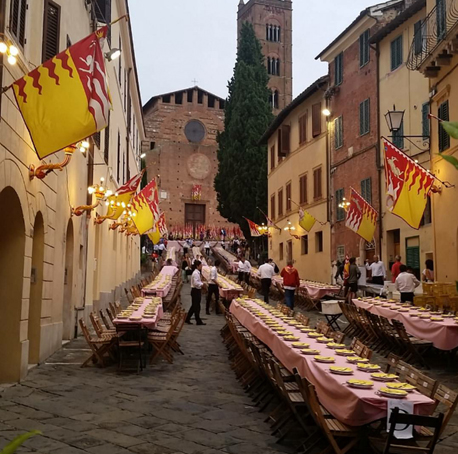 Jesus used this episode to teach that He is the Bread of Life. He stands ready to multiply any ministry that aims to share the food of faith, love and hope in God with our neighbours. Complex problems and lack of resources are no obstacle to Christ our Saviour!

So it was no small thing when, totally impromptu, without tables and chairs, or ingredients and cooking pots, in a location that the disciples called “desolate”, Jesus fed more than 5,000 people at once!

The logistics of this event were challenging to say the least. To start with, Jesus was weary. He’d gone to this desolate place to get a break from the crowds he’d been working with all day, crossing the lake of Galilee to get away from them. He was sad because he’d just heard about the death of John the Baptist and, as the significant season of Passover was approaching, he wanted some time alone.

The disciples weren’t up for it either. In Matthew’s version (14:13-21) they suggest that Jesus sends the crowd away to go and get their own dinner. To them, the solution was simple – let the individuals deal with it. However, to Jesus, there were more complex possibilities, which he challenged them to grapple with.

“How about we feed them?” he said. In John’s account (6:1-15) this is specifically directed at Philip. His response probably sounds familiar to all of us, who’ve faced mission opportunities with a lack of resources. “It can’t be done,” he replied. “Don’t you know that it would take a year’s wages just to buy a little bit of bread for everyone?” Clearly Phillip thought Jesus wasn’t very good at accounting, and that this was a project better left unstarted before the debts piled up for very little result.

Andrew was a little more optimistic, at least at first. He’d found a boy in the crowd who, it seems, offered his meal as a contribution to the cause. “We’ve got five loaves and two fish,” he started. But like his brother Peter after an enthusiastic start, Andrew’s courage failed and he also ended up simply focused on the lack of resources immediately to hand. “What are these among so many?” he despaired.

Complex problems need creative solutions. The disciples at that time hadn’t quite grasped just how creative the One they were with could be. We know how the story went and the abundance of leftovers they gathered up by the end of what must have been an amazing evening.

Jesus used this episode to teach that He is the Bread of Life. He stands ready to multiply any ministry that aims to share the food of faith, love and hope in God with our neighbours. Complex problems and lack of resources are no obstacle to Christ our Saviour!

I wonder what the boy who offered his loaves and fish to the cause made of all this. There’s something delightful about the innocent enthusiasm of a child trying to help out the adults when they’re struggling. I doubt he had any idea what Jesus was about to do, but perhaps he’d seen the healings earlier in the day and thus had some inkling that this charismatic character was going to surprise them all. Maybe his mum gave him a prod to speak to Andrew, so he could learn about being helpful. Whatever he was thinking, whatever motivated him, he came forward with a willing heart to be part of finding a solution. This is in stark contrast with the grown up men who could only see obstacles.

How often that’s all it takes! We don’t have to be superheros of faith to be part of Christ’s great work. We just need to be someone who doesn’t see a lack of resources having the final say about an opportunity for ministry. Someone who, perhaps naively, steps forward and says, ‘here I am Lord, what can you do with these gifts?’ Someone who makes their little offering available to the God who is capable of multiplying it, doing far more than we dare ask or think.