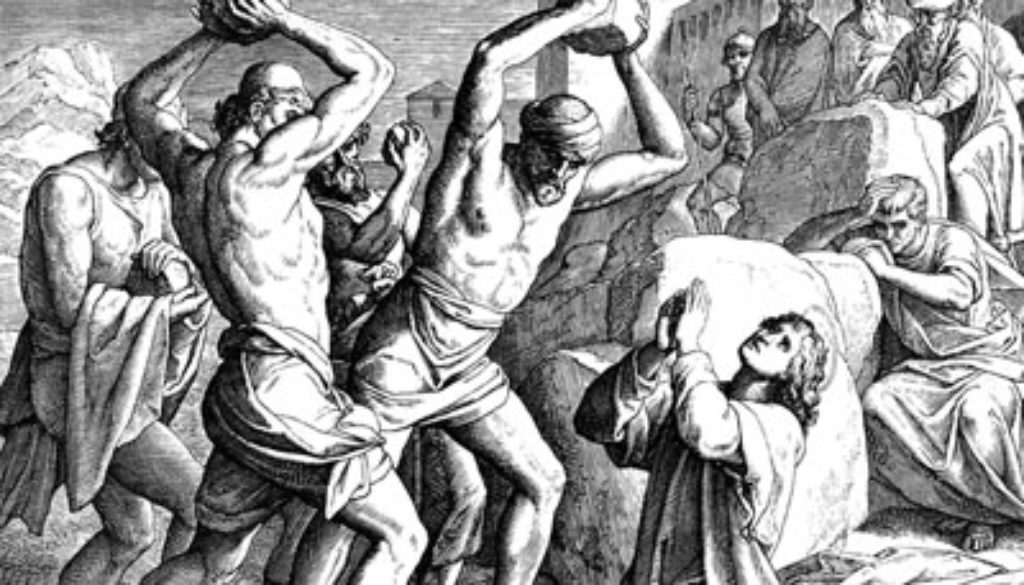 Worship and witness are closely related. It is thanks to the testimonies of the witnesses that we can worship. And in their own unique way, every worshipper becomes a witness.

Today we can’t worship as we are used to, but we can still witness. And hopefully our witness will become something that draws others to worship. For it is not only the words of the witnesses that have the power to move, but also their silences, not only their presence, also their absence, not only their lives, yes even their deaths.

To understand Stephen’s story, we will have to give a few steps back. Acts 6 recalls the choosing of seven ministers of the Word and Stephen was one among them. The word about him was wonderful; that he was “full of faith and of the Holy Spirit” (6:5). As the number of disciples in Jerusalem increased, animosity stirred among some prominent Jews and some of them started to argue with Stephen. However, as they couldn’t stand up to his spiritual wisdom, they persuaded a few men (these are the same witnesses who later stoned him) to bear false witness against him by saying that they have heard him blaspheming against Moses and God.

As a result of these false accusations Stephen was brought before the Sanhedrin. Most of chapter 7 is devoted to Stephen’s speech to the Sanhedrin. In it he basically gives a quick synopsis of Israel’s history – everything that any Jew would wholeheartedly agree with. Towards the end of this speech he quotes the prophets and makes the very common prophetic accusation, that they have always resisted the Holy Spirit, that prophets have always been persecuted and betrayed. And then the seemingly fatal accusation: “This is exactly what you did to the Righteous One.” (Jesus)

It is at this point that our reading starts: “When they heard this, they were furious and gnashed their teeth at him…”

Note, how right from the start the contrast is established between two kinds of witnesses; a contrast that will characterize the story of Stephen’s stoning. The false witnesses were furious, gnashed their teeth; they yelled out and dragged him out. Eugene Peterson describes this with all the drama you could imagine:

“At that point they went wild, a rioting mob of catcalls and whistles and invective…Yelling and hissing, the mob drowned him out. Now in full stampede, they dragged him out of town and pelted him with rocks.”

In contrast with these false witnesses, the true witness is “full of the Holy Spirit”…he saw the Son of Man in his glory and prayed for his accusers.

However, in this we notice not only the contrast between Stephen and his accusers, it is also impossible not to notice the similarities between Stephen and the One he is bearing witness to. Stephen does not only bear witness to Christ in what he said but also bears witness to him in the way he dies. Just as Jesus cried out “Father into your hands I commend my Spirit”, so Stephen cries: “Lord Jesus, receive my spirit”. Just as Stephen prays for his accusers before he dies (“Lord do not hold this sin against them”), Jesus also prayed for those who crucified him. (“Father forgive them; for they do not know what they’re doing.”)

The story of Stephen’s stoning is so harrowing, so violent and the contrast between him and his stoners so big that it is easy to forget that the people who stoned Stephen were not wild criminals, they were not hooligans, atheists, terrorists or religious fundamentalists. They were upstanding members of their community; but more important, they were people of faith…just like all of us.

We should never forget

In other words, when reading this story, we should never forget the atrocities that are still being perpetrated against Christians in many places in the world. While we take our freedom to worship and witness for granted, there are countries where our fellow brothers and sisters in Jesus Christ are still persecuted for their witness and imprisoned for their worship.

Christians have not only been killed by others; Christians have also been the perpetrators, the killers of others. One could think of the Crusades, the Inquisition, the witch-hunting and the list goes on. In modern times one could think of the legacy of slavery and of course the Holocaust. So much so that Elie Wiesel, speaking to a group of Christians, could say: “if the victims are my problems, the killers are yours.”

Christians were not only martyred, perhaps just as many were martyred by Christians.

The question is: how is possible? How is it possible that a people, a faith community who were the early victims of false witnesses, could become false witnesses themselves? And again, one has to reiterate; we are not talking about a lunatic fringe, bloodthirsty fundamentalists, we are talking about good, decent people. Again, people of faith, just like us.

Abraham Heschel, quoting Reinhold Niebuhr remarked once that “the tragedies in human history, the cruelties and the fanaticisms, have not been caused by criminals…but by good people…by idealists who did not understand the strange mixture of self-interest and ideals which compounded in human motives…the great contrast is not between ‘God-fearing believers and unrighteous unbelievers.” (God in search of man, 370)

Or as Solzhenitsyn famously observed during his time in the Gulag:

“If only there were evil people somewhere insidiously committing evil deeds, and it were necessary only to separate them from the rest of us and destroy them. But the line dividing good and evil cuts through the heart of every human being…”

So the question is: What makes the difference? What is that enables decent, good, yes even faithful people just like us, to become false witnesses?

I think the answer is given in this story of Stephen. It is said that after they stormed Stephen, he was allowed a heavenly vision in which he saw Christ at the right hand of God. A truly remarkable and beautiful vision.

And then the crucial words: “At this they covered their ears…” Literally the Greek text says “they stopped their ears”. A Dutch translation says “they put their fingers in their ears.” Others simply say: “they refused to listen.”

In short: they became hearing deaf and seeing blind.

It is not so much indifference that could make good people do evil things. It is the ability to close your ears and cover your eyes. Or even worse and perhaps the easiest way: to pretend not to hear. To pretend not to see. Not to hear the cries, not to see to the pain of others.

Perhaps the most important thing; not seeing, not hearing is not a case of being uncaring or having a heart of stone. There are indeed many reasons why we don’t hear or don’t see and most of them we can easily justify.

Usually the easiest way to justify inaction is as a result of ideology or higher causes. If we become almost duty-bound not to hear, not to listen, not to see.

A profound insight into this was given by the German-Jewish philosopher, Hannah Arendt’s. Hannah Arendt, herself a survivor of the Holocaust, was commissioned by the New York Times to report on the trial of Adolf Eichmann in Jerusalem in 1961. What surprised her about him, was not his brutality but his mediocre ordinariness. If anyone expected to see some kind of incarnation of evil, they would have been disappointed. Eichmann maintained that he never killed anyone or even gave the orders for anyone to be killed. He only did his job and he was even proud of the fact that he did it better than anyone else.  He was simply a cog in a machine that admittedly killed millions of people but he only did what was expected of him.

Hannah Arendt’s report for the NYT was titled: “it was sheer thoughtlessness that predisposed Eichmann to become one of the greatest criminals of that period.”

Thoughtlessness is neither stupidity nor accidental oversight. Thoughtlessness refers to a definition that the Greek philosopher Socrates gave for “thinking”. “Thinking”, he said, “is the conversation I have with myself.”

Becoming isolated from oneself

Not being able to hear the voices of and see the faces of our friends and family are bad, but something worse than that can happen to us: when we become unable to hear our own voices; those little voices that continue to prompt us to hear, to listen, to see…

And this is exactly why we need the voices of the witnesses and the witness of Stephen. Because they, like him, remind us of a God whose love bridged the chasm of indifference and isolation; a love that became flesh and pitched a tent among us, (as John 1:14 literally says), a love that could not bear the distance and isolation from us.

As the isolation in Australia is gradually lifted, let us also lift our isolation from ourselves, let us also heal the isolation between us and others. Let us listen to the voice of God, the voice of the Holy Spirit, who is both God’s voice and God’s ear. And let us remember that the isolation-breaking, community-forming presence of the risen Christ is among us, with us, not so much because of anything that we did but because the listening Spirit has been with us all along and has never left us.