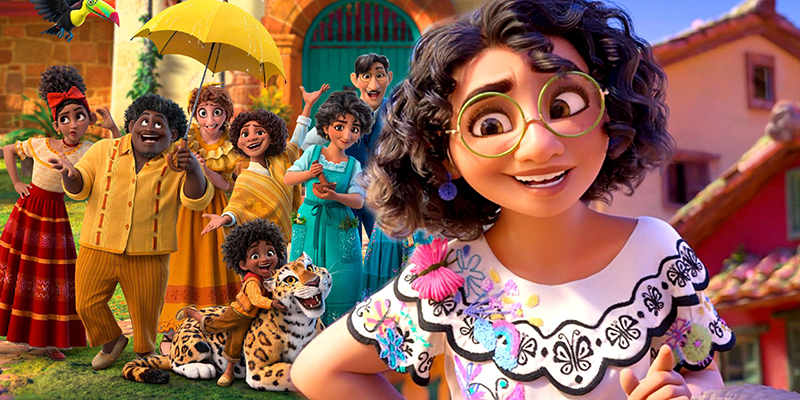 Villains are mainstays of films and storybooks and have been for centuries. But for those who have seen the recent Disney film Encanto, this doesn’t appear to be the case. There is no mustache-twirling villain in the shadows waiting to reek havoc. It is the threat of a changing world and resistance to change that is dark cloud over the story, but also its’ sliver lining.

As Sojourners noted in a recent article by writer and pastor JR. Forasteros, the story is about “families, systems and prophets – one that can serve as a warning and a balm to churches struggling to cope with a changing world.”

The story of Encanto revolves around the extraordinary Madrigal family, who live hidden in the mountains of Colombia in a charmed place called the Encanto. The magic of the Encanto has blessed every child in the family with a unique gift. As the film begins we are introduced to the Madrigal family and their family home, noting that its’ sibling Mirabel who hasn’t been blessed with the magical gifts of her family members.

Spoilers follow for those who haven’t seen the film

As the story unfolds it appears that Mirabel may in fact have the gift of prophecy, when she begins to notice cracks in the casita, the magical house the Madrigals call home. However, when she tries to point them out, she is told by her grandmother Abuela that “there is nothing wrong with la Casa Madrigal. The magic is strong!”

In order to understand what is happening, Mirabel sets out on a quest to discover what is wrong with the magic in the Encanto. Her quest leads her to another prophet Tio Bruno, who has been cast out for his unpopular visions of the future. True to Disney form, this sparks one of the films catchiest musical numbers “Don’t Talk about Bruno”.

Mirabel begins to see the break down in the magic of Encanto mirrors some of the issues in her family, but when she addresses the problem again she is met with resistance and anger and warned that everything is fine and that she shouldn’t hurt the family with these ideas.

As JR. Forasteros notes in his Sojourners article this “anger is familiar to anyone who’s been part of a toxic group — a family, a business, a church. The more established and successful any system becomes, the harder it is to remain open and responsive to change.

“The church in first-century Ephesus faced this exact problem. Confronted by pressures to conform to the surrounding pagan culture, the church had taken a particularly rigid stance against a group of false teachers at work in the region (a stance for which Jesus praises them). However, in their zeal for maintaining their integrity, Jesus warns they’ve made a grave error:

I have this against you, that you have abandoned the love you had at first. Remember then from what you have fallen; repent, and do the works you did at first. If not, I will come to you and remove your lampstand from its place, unless you repent.

“The lampstand language is particularly ominous. Jesus introduced himself as the one who walks among the lampstands, which had previously been identified as symbols of the seven churches of the Revelation. In other words, Jesus is warning the Ephesians that while their goal (maintaining their identity as Jesus’ church) is good, the means by which they’re achieving their goal is wrong. They’ve abandoned their first love — Jesus himself — and thereby are dangerously close to losing their identity as a church.

“The way the Ephesians are trying to maintain their identity is destroying the very thing they’re trying to preserve.”

This is one of the major themes in Encanto – maintaining the status quo and not realising that things are changing, and that change is inevitable. The mistrust and anger that is directed at Mirabel causes the casita to fall apart, and Abuela realizes her error. She apologises to Mirabel, saying, “I was given a miracle. And I was so afraid to lose it that I lost sight of who our miracle was for.”

Many young people, like Mirabel, see cracks in the house that raised them and introduced them to Jesus. Perhaps like Mirabel’s family, the church needs to understand that young prophets aren’t a threat to the existence of church but a gift, like Mirabel is to her family.

As JR. Forasteros continues “It is through her perspective and voice that the family can see its flaws honestly. They can turn out and become a balm to their community once again — a balm that doesn’t destroy them as they serve the world.

“The church needs our young prophets. Rather than casting them out, we should listen to them, receive their perspective, and ask them to help us change. Perhaps then we too, like Abuela to Mirabel, could say to them, “I asked for a miracle and he sent me you.”

Encanto is now streaming on Disney +