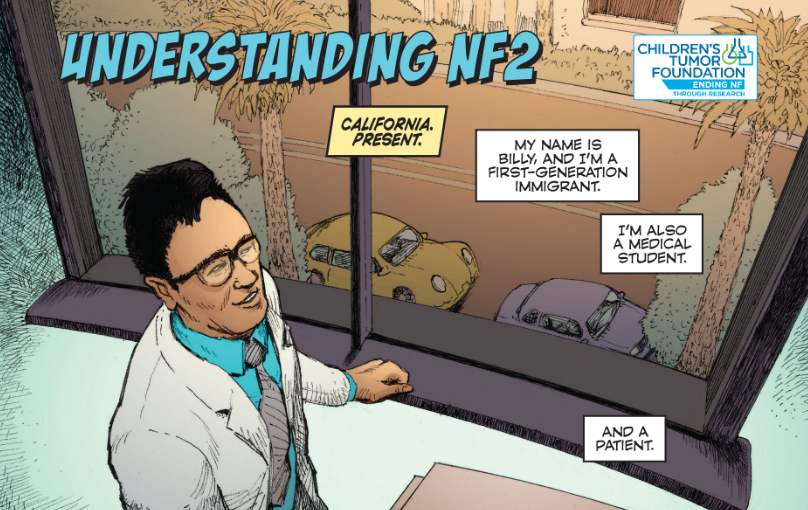 Written by Vanessa Shealy Younger and illustrated by Eisner-nominated artist Kevin Colden, the comic tells the true story of Billy Nguyen, who was diagnosed with neurofibromatosis type 2, or NF2, at the age of six. NF2 is characterised by the development of benign tumors on the hearing nerves, and sometimes leads to partial or complete hearing loss or other difficult problems.

Once Billy learns of his NF2 diagnosis, the story tracks his childhood struggle to understand the difficult disorder. His Vietnamese parents spoke some English, but all the medical terms were too overwhelming, leaving young Billy to make a lot of adult decisions on his own.

Now a fourth-year medical student at the University of California, Los Angeles, Billy was a part of the process from the beginning.

“I’m speechless. I think this comic is so beautiful, it still blows me away. I’m honoured to have my story told in this way,” he said.

The comic’s artist, Kevin Colden, has a personal connection to NF through his wife, graphic novelist Miss Lasko-Gross.

“My wife’s second cousin has NF1, so I’ve personally seen how NF can affect families. Working with this script and being able to bring Billy’s story to life was a wonderful opportunity,” he said.

Released in honour of NF Awareness Month, the comic is one of several remarkable stories the Foundation has released to highlight the critical need for NF research. This year, the campaign focuses on the external things the NF community is doing to raise the profile of this rare disease, and the internal struggle patients experience living with a genetic disorder that manifests differently in each NF patient (sometimes externally, and often internally).

The comic is available to read for free here. The wesbite also find further information about CTF.