Does death make us human? 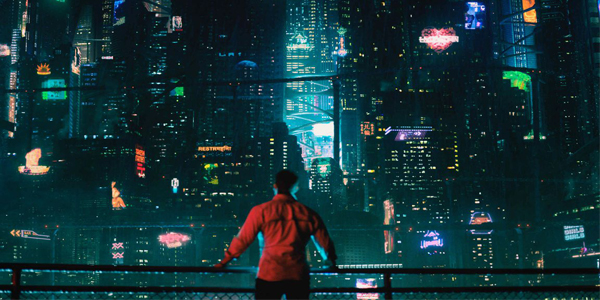 Altered Carbon [AC], Netflix’s latest flagship sci-fi series based on the novel by Richard K. Morgan, is simultaneously terrifying and hopeful, at least for those of us already nervous about the trajectory of technological progress.

(Fair warning: the plot of Altered Carbon is fairly complex, so bear with me.) The series is set 300 years in the future, when humanity has figured out how to digitally code and store the human consciousness within small disks called “(cortical) stacks,” which are implanted in the cervical spine. This allows a person’s consciousness to be transferred between bodies, which are referred to as “sleeves.” The result is that those with the financial means to “resleeve” have become essentially immortal, transferring their consciousnesses from body to body upon “sleeve death.”

The main protagonist is Takeshi Kovacs (Joel Kinnaman; House of Cards S4–5, Suicide Squad), who wakes up in a new body 250 years after his sleeve death, having been “put on ice” (his consciousness punitively placed in cold storage) due to his involvement in an uprising against the global state on account of its embrace of stack technology. Kovacs has been awoken at the behest of Laurens Bancroft (James Purefoy), a mega-wealthy, 350-plus year old figure, to investigate the murder of Bancroft’s sleeve and the attempted erasure of his digital backups. Bancroft offers Kovacs a hefty paycheque and a full pardon, and so begins a detective story.

Altered Carbon’s plot is highly complex, occasionally even convoluted. At times, new points of interest are introduced to the plot, only to be explained episodes later. In short, look elsewhere if you want a three-act production or some variation of Campbell’s hero’s journey. AC’s complexity no doubt will be a turn off for some potential viewers, who may not endure the tumultuous world-building of the opening episode. For others, however, such density makes for a refreshingly intelligent and original sci-fi offering.

Altered Carbon is, if nothing else, an aesthetic feast. The sets, visuals, and effects are inebriating, reminiscent of Blade Runner 2049, no doubt thanks to Netflix’s significant series budget. The visual quality of television has quickly caught up with even the highest budget Hollywood blockbusters in recent years, and AC is probably the best example of this trend at present.

The themes of Altered Carbon are far from subtle. Its world is bleak on account of the wealth disparity that has resulted from stack technology. The mega-rich, called “Meths” (a reference to the biblical Methuselah), have capitalised on their immortality and live in towers in the sky, well above the masses suffering below, not unlike the most unvirtuous of Greek gods.

Moreover, the existence of digital consciousnesses separable from the body has rendered bodies disposable. The result is a savagely violent world that houses fights to the death for entertainment, virtual torture in which victims are killed repeatedly, and sex workers who submit to snuff acts only to be resleeved for the next job. Indeed, the show is abounding with nudity, sex, and gory violence, and many viewers will understandably avoid it on account of this. While there are questions to be asked about whether the series ever strays into exploitation in its depiction of both violence against women and women’s bodies (an over-the-top naked fight scene comes to mind), the levels of sex and violence are mostly consistent with the themes raised by the show—what happens to humans and society when bodies are mere commodities and no longer matter? The show’s graphic content serves to thrust this question in the face of the audience, never being concerned to shy away from the discomfort it might elicit.

In many ways, Altered Carbon rehashes themes already present in contemporary sci-fi, especially films like Blade Runner and The Matrix, and shows like Netflix’s other popular series, Black Mirror. Certain episodes of the latter are probably the closest thematic comparisons to AC, with Black Mirror frequently pointing to the dangers of potentialities like digital consciousness in various forms. What AC offers that Black Mirror does not, however, is a more thorough gaze into a world shaped by such technologies. This is no doubt helped by the audience taking the perspective of the reluctant detective Kovacs, whose investigation brings him into contact with people and places from all walks of life in the AC universe, allowing the viewer to witness all manner of its dimensions.

The show is not without its faults. Its graphic nature, especially in relation to women’s bodies, has already been mentioned. The characterisation also runs into a few speedbumps. Other reviews have focused on Joel Kinnaman’s portrayal as Kovacs, suggesting his delivery is wooden. I’m more inclined to see Kinnaman’s portrayal as appropriately aloof, a blend of Bogart (the stoic, cynic detective) and Craig-era Bond (the hard shell over traumatised centre).

Genuinely problematic, however, is the way the Kovacs character is written—his actions across his lifespan are bewilderingly inconsistent, though to avoid spoilers I’d best avoid details. One of the show’s other main characters, who primarily appears later in the series (again, I’ll avoid spoilers), demonstrates an unbelievable devotion to her weak motivating goal, to the point of distracting from the story. The remainder of the large cast of characters is mixed, with some clichés among the ranks, though generally speaking the casting and acting is excellent. Notable is the number of strong female characters in the series, which has not always been a feature of the sci-fi genre.

Altered Carbon | Remember Who We Are [HD] | Netflix

Despite its various flaws, Altered Carbon is thoroughly enjoyable, if somewhat uncomfortable. It raises substantial themes in a time in which people are often intoxicated with technological progress. At first, AC seems to champion such progress, but as the series wears on it becomes overtly critical about the technological possibilities it depicts. This is perhaps best expressed by one of the show’s villains:

Where is the voice that said altered carbon would free us from the cells of our flesh? The visions that said we would be angels? Instead, we became hungry for things that reality could no longer offer. – Dimi the Twin

The biotechnological questions raised by AC are poignant, and are surpassed only by the questions it raises about the character of humanity itself. If technology has in many ways already brought out the worst in humans in our time, what might result from technologically-generated immortality? Can virtue be sustained in people who live on and on with no real possibility of death? Indeed, does fallen humanity need death in order to be human? The author of Genesis 3 might have something to say about that.

Altered Carbon is rated MA and is now streaming on Netflix.

1 thought on “Does death make us human?”