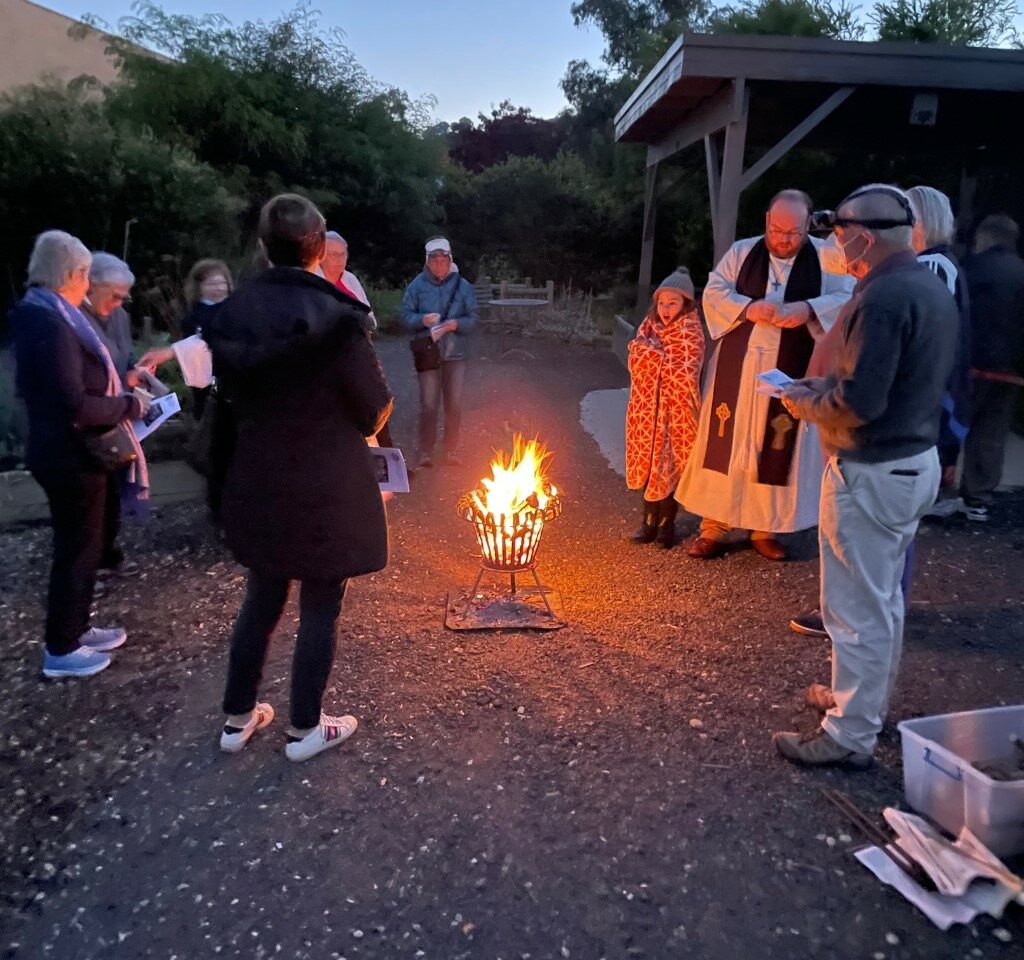 This year, for the first time, the Tuggeranong Uniting Church (TUC) held an Easter Dawn Service. The service began around a fire that had been (safely) lit in a brazier within the church’s community garden. Those present gathered around, watching both the rising sun, visible in the east, and the setting moon, as it descended over the Erindale Shopping Centre to the west of the church.

Rev. Elizabeth Raine led the group in prayers and a reflection by Thomas Merton on “the rising sun”. The surrounding garden beds reminded those present of the regular cycle of life, death, and life once again. Meditative music from Taize enhanced the moment.

The group moved next to the driveway entry to the church, carrying the candles that they had lit in the garden. There, a member of congregation, James Ellis, offered a reflection on “the truths of heart and mind that find their roots in the mystery and practicality of God.”

The group then moved to the doorway entry to the church, where the story of Mary’s encounter with Jesus in the garden was read and prayers for others were offered. Finally, the group moved into the sanctuary area, where a final reflection from Fearful Visits to Gardens Alison Swinfen was offered, a further Taize chant was sung, and a short affirmation from Iona was said together.

Rev. Raine swapped her liturgical alb for her “Lettuce Pray” apron, and joined a group of volunteers in the kitchen, to provide bacon and eggs rolls, and coffee, to those who stayed on for breakfast, before the large morning congregation began to arrive for the Easter Sunday Communion service.

The service was deliberately shaped to reflect the journey that took place on the first Easter Sunday; the movement from surprise, to discovery, to exploration, to growth. The service mirrored the process through which Elizabeth has been leading the congregation right throughout the season of Lent.

The two regular online TUC Bible Studies in Lent were focussed on Luke’s Gospel, which is the scripture that provides readings for each Sunday during the current year. Luke’s Gospel highlights the theme of discipleship—following Jesus on the way. Elizabeth supplements this with a more informal weekly TUC Lectionary Café, where the Gospel and other readings are discussed. In addition, during Lent the TUC website featured a weekly video, produced in-house, which focussed on the theme for ten week.

Added to those studies was the offering, also online, of Daily Prayers (morning and early evening) each weekday. Daily Prayers used the resources of the Northumbria Community, with additions of short reflective musical items and other meditative material written by Australian writers such as Craig Mitchell.
The community of practice that formed around these online Daily Prayers provided a space for people to reflect on their own faith, to consider how they live out their faith in daily life, and to consider other ways of being faithful disciples in the 21st century. It became an important part of the day for dozens of TUC folks.

Then, the community of prayer that had become a community of care, grew into a community to share with still more people. Daily Prayers were advertised more widely, and people from beyond the Tuggeranong Congregation joined in—from elsewhere in Canberra, from Sydney, from the Riverina, from the south coast of NSW. Growth in numbers and in impact went hand-in-hand with growth in discipleship and deepening of faith.
It has been a wonderful Lent—Easter journey!

For details of future TUC Bible Studies, as well as the Daily Prayers and worship services, go to the congregation website here.