Home
Features
Creating a home for all to share

Based out of Hamilton Wesley Uniting Church, The Commons is a community library, café and art space. More than three years since it first opened its doors, it is providing Newcastle with a space for a just and ethical community to flourish.

The idea for The Commons was planted halfway across the world. When Uniting Church members Caitlin O’Reilly and Tim Evans were travelling through Europe, they came across a community house in Estonia. What quickly developed was the idea for a similar place in Newcastle, where local people could visit and hang out with no obligation to purchase anything.

Upon returning to Australia, they took the idea to the Hunter Presbytery. In early 2012, when it was suggested Caitlin and Tim enlist a small group of people to support the project, they approached Dr Miriam Williams and her husband, Andrew Goodwin.

Miriam and Andrew threw themselves in, becoming co-founders of The Commons and they remain heavily involved in various roles (including Action Groups).

The project found its home at Wesley Uniting Church’s Fellowship House. After sourcing second-hand and upcycled supplies, holding several working bees and devoting many long nights to transforming the hall into a café, The Commons officially opened in November, 2012.

Since then, it has grown to include an events space, bulk organic goods store, music room, office space, meditation and meeting room, gallery, op-shop, book and seed libraries. 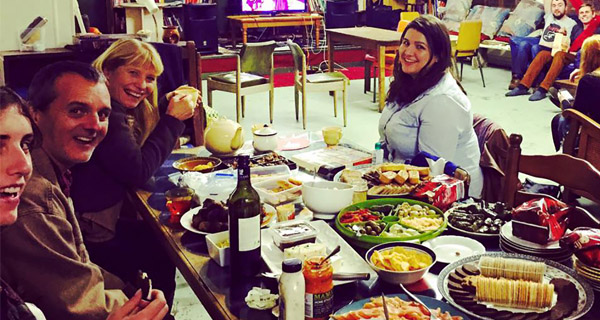 The Commons is the community

Miriam holds a PhD in Geography. Her thesis focused on community organisations — or urban “commons”. “The Commons is the community,” explains Miriam. “It is not separate from it.”

According to The Commons’ website, the project is part of a broader political movement.One that recognises the need for people to participate in more just and ethical economies, and to create community spaces.

“It’s part of a diverse network of volunteers, groups, strangers and organisations that make up Newcastle. It is a resource for the community in that it is a physical place to meet and be that is homey and affordable.

“It is also an incubator and a launching point for individuals and groups who want to hold an event, workshop or group that is inclusive, sustainable, ethical or creative. In that way it is a community resource that is sustained by and sustains diverse communities.” 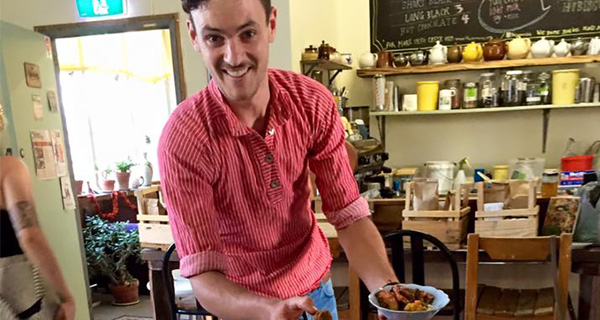 What’s this got to do with ‘church’?

Despite the many things that The Commons is, Andrew reveals that people often don’t know what goes on there, or how it is “Church”.

“This is a case of not seeing the forest for the trees, says Andrew. “There’s no big secret. It’s not like there’s any strange rituals [or] back-rooms filled with relics. That’s not what being ‘church’ is about. Jesus didn’t have those things. He just loved people and showed them the way to change the world.”

“That’s all we’re trying to do. Ultimately, I think that’s what the Uniting Church is — or, at least, should be — trying to do across the country.”

The Commons hosts all sorts of events, big and small. These have included international speakers such as Mark Berry (the New Monastic community) and “pyro-theologian” Pete Rollins, the latter as part of the Dangerous Conversations Festival. The Commons also hosted outspoken author and columnist Anne Summers in 2013, when she gave a public talk in Newcastle about “Her Rights At Work”.

“While big names and long distances sound impressive, the lifeblood of The Commons is in the small events and groups that call the place home and meet the values of being sustainable, creative, ethical and inclusive,” says Andrew.

According to Andrew, most people who end up involved with The Commons start by just turning up and doing what they are passionate about. “Start a knitting group, play music. Use our office space for your small business. Buy good, organic and fair-trade food.”