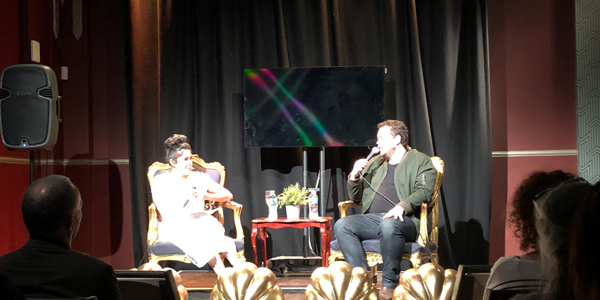 SBS The Feed presenter Jan Fran, who recently MC’d the Long Walk to Treatment launch event, participated in a wide ranging discussion with comedian Corey White as part of Giant Dwarf’s Yack comedy festival. It was a surprising conversation that touched on many aspects of faith, as well as topics as wide as drug addiction, political solutions, and the fractious nature of online dialogue.

Corey White is the host of Roadmap to Paradise, a series created for the ABC. It promises to “solve all the world’s problems while continuing to advocate for change for kids stuck in our dysfunctional foster care system.”

Roadmap to Paradise aims to give policy suggestions that would fix big problems in Australian society. The show addresses topics ranging from domestic violence to the controversial nature of Australia Day.

Mr White recalled that he was “very shaped” by one of Jon Stewart’s comments. The former Daily Show host said that the only thing he had achieved on the show was securing compensation for 9/11 first responders.

Mr White told the audience that this passion to fix the foster care system came from his own life experiences growing up inside it.

“I think I was always talking about these really basic things in human society,” he said.

“My parents were both drug addicts. I think they had pretty harried childhoods.”

Mr White’s mother passed away from a drug overdose when he was ten.

Describing himself as a former meth amphetamine addict and three time university drop out, Mr White attributes his own survival to luck. He says his experiences had made him more empathetic.

“I think I learnt empathy by being destroyed,” he said.

Mr White said that he had been very lucky despite his tough start to life, and had been fortunate to develop a love for reading. His early reading interests included the Bible, Blyton, and RL Stines’ Goosebumps series.

He later recalled how a chance encounter with a telemarketer saved his life. When he was going to commit suicide by jumping off a bridge, he was interrupted by a telemarketer’s call, asking him if he wanted to save a lot of money on his mobile phone bill, which made him laugh.

Mr White traced his comedic career back to his school days, when he asked a music teacher if he could get a Sound Achievement grade if he did a stand-up comedy set. After copying a few Seinfeld bits while wearing a dress, his met his goal.

“The ultimate goal is to make the world a better place and I think stand-up comedy is a good way to get people’s attention.”

He is currently in the process of writing his memoir, titled Prettiest Horse in the Glue Factory.

“It doesn’t matter if you’re the prettiest horse in the glue factory, you’re still going to die,” he explained.

He said the title called on people to focus more on changing the circumstances surrounding their current problems.

When Ms Fran asked him what saying he would put on a billboard, Mr White initially nominated “love one another.” When she pointed out “that’s Jesus” he replied, “Who better to plagiarise from?”

The Yack Festival is now running at Giant Dwarf Theatre in Redfern.