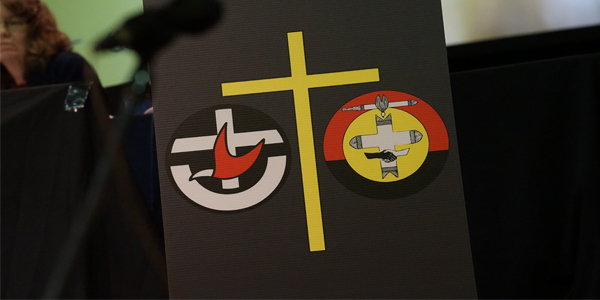 The Uniting Church has affirmed that the First Peoples of Australia, the Aboriginal and Islander Peoples, are sovereign peoples in Australia.

On 13 July, the 15th Assembly meeting approved the statement affirming sovereignty by consensus at Box Hill Town Hall in Melbourne.

After consultation with working groups an earlier proposal was amended to give an expanded definition of sovereignty as the “way in which First Peoples understand themselves to be the traditional owners and custodians” of the land.

Referring to the Statement from the Heart at Uluru, the Uniting Church recognises that Sovereignty is understood by the First Peoples as “a spiritual notion, reflecting the ancestral tie between the land and the First Peoples.”

Members of the Uniting Aboriginal and Islander Christian Congress spoke from the floor of Assembly to affirm the proposal as a way to move forward in the covenant the Uniting Church has with them.

The original proposal, brought to Assembly by immediate past President Stuart McMillan, stated that the Uniting Church had not recognised the First Peoples as sovereign,

“In this, in resolving that First Peoples are sovereign, the 15th Assembly gives moral leadership to our nation,” the proposal said.

Former Chairperson of Congress, Rev. Dennis Corowa, told the Assembly that the journey to this point,  “has been a work in progress, a journey for us to be able to live comfortably within Australia, feeling neighbourly love in community. We are moving closer towards this. Congress has led the way on this journey.

“We need to be in Federal political life, we have Aboriginal leaders there already, but we need a voice to Parliament directly elected by First People,” he said.

“We already have this in the UCA, with the collective voice of our people in our councils, elected by First Peoples. Makarrata (a Yolngu Word) refers to the reconciliation of offender and victim, a spiritual notion, which may lead to bloodletting, and we rejoice that this has been done by Christ on the cross.”

The current President of Congress, Rev. Garry Dronfield, said, “We speak with a passion. We seek a continuation of the covenant. Sovereignty refers to who we are and how we relate. Let us all commit to make these words into actions.”