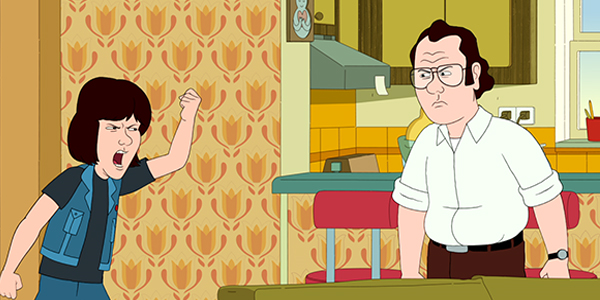 Review: F is for Family

Set in 1970s America, F is for Family is a nostalgia-heavy satire with a surprising message about the need to communicate with the ones you love. Burr voices Frank Murphy, a cranky Korean War veteran who became a father and lost his youthful optimism shortly after high school. F is for Family chronicles his struggles with the pitfalls of his menial airport job and changes in his home. The show divides its attention between Frank and his family members. These include his wife Sue (voiced by Laura Dern), a housewife who breaks into the workforce, oldest son Kevin (Justin Long) a struggling rock musician, his gifted daughter Maureen (Debi Derryberry) and younger son Bill (Hayley Reinhart).

F is for Family is an animated comedy based on the childhood of its co-creator, Bill Burr. Anyone familiar with Burr’s stand-up comedy routines would have some idea of what this entails. Burr’s dark humour often looks wistfully back at the time he grew up in, holding the 1970s up as a more dangerous, less constrained time, one where children were free to take risks away from today’s ‘helicopter parenting’. Burr recalled this relative freedom in an interview with NYDaily News.

“When I was a kid, you’d go outside and you and your friends would collectively decide with your kid brains what to do that day,” he said.

“It could be to go play Wiffle ball, play with matches, throw rocks in someone’s pool or have a crabapple fight. Kids were allowed to be kids.”

“Now they’ve got everybody so scared, myself included, that if I did have a kid, I’d be terrified to let ‘em go out and get the newspaper.”

Accordingly, the kids in F is for Family are often left alone, to play in a neighbourhood that is fraught with hazards like rusting debris, bullies, and a mysterious old man. It’s not all fun: Frank yells and screams obscenities at his sons (while referring to his daughter as his ‘princess’).

As wistful as Burr’s recollection of how his childhood was different from now is, he celebrates a period of time that need not be romanticised. In championing a less ‘politically correct’ time, the show verges on celebrating a time that was more racist, sexist, and generally retrograde. It should also be noted that the show is full of coarse language and, at points, violence.

As is the case with many Netflix originals, the show takes time to hit its stride, building to its major focal point over two seasons. The show’s main value arguably lies in its exploration of what it takes to have a successful marriage. Frank and Sue’s marriage struggles against financial and familial demands in a time of widespread societal change. The lessons here are delivered in a way that is illuminating without ever being overly didactical.

F is for Family is a show for those who enjoy an abrasive comedy. Its surprisingly wholesome reflections on marriage and commitment ensure that it is rewarding in the long term.

Seasons one and two of F is for Family are rated MA and are currently streaming on Netflix.