Walking in unity on Bundjalung Country

In a first for our Synod, the “Walking on Bundjalung Country” gathering this year opened the way for Uniting Church members to walk alongside their Uniting Aboriginal and Islander Christian Congress brothers and sisters. The aim was bold and simple: build greater understanding and respect between First and Second Peoples, to hopefully contribute to the broader reconciliation process.

In the 40th Anniversary year of the Uniting Church of Australia, the special visit was also a timely reminder of the origins of the UAICC, notably the meeting at Crystal Creek in 1982 which set in motion plans for a nation-wide Aboriginal and Islander Christian organisation.

A group of about 40 non-Aboriginal people visited Bundjalung country, located in the Northern NSW’s coastal region. They also visited Taree (Biripi Country), Kempsey and Wauchope where they joined traditional prayer and worship. They met many of the local Aboriginal community leaders to discuss social issues and hear plans for future Aboriginal ministry.

“Cubawee” is the country of Aunty Diane Torrens, Widjabal woman and Githabul woman of the Bundjalung nation from the Northern Rivers, and Regional Chairperson of NSW/ACT Congress. She and her husband Tim Torrens initiated the “Walking on Bundjalung Country”, inviting non-Aboriginal people to join them for a time of learning, connection and sharing on Country.

Formerly known as Tuncester Reserve, “Cubawee” was a self-managed Aboriginal reserve from 1932 until 1965. At a time when segregation was widely practised in Australia, it was also a place of Aboriginal resistance. Aunty Diane’s grandfather Pastor Frank Roberts Snr. first established the “Cubawee” settlement and church as a place where Aboriginal people could live freely and practise their spirituality. Roberts was important in the Aboriginal-led Bundjalung Christian movement and land rights movement in the 1940s.

The late Rev. Charles Harris was instrumental in the founding of Congress. He met his wife Rev. Aunty Dorothy Harris Gordon in the 1960s at “Cubawee”. They were committed to ministry in the Uniting Church and with Aboriginal people.

Aunty Diane gave a heartfelt Welcome to Country at “Cubawee” to the group gathered to share stories, listen deeply to wisdom of elders and experience Aboriginal culture. She shared her story about growing up in the late 1950s. Even though it was a time of widespread racial discrimination, her family rose up from those dark times.

For the most part, Aunty Diane says “Cubawee” was a happy place to grow up, despite the lack of comforts such as electricity, sewerage and running water. Housing was basic with dirt floors. Her grandfather, Pastor Frank, set up the settlement because the white people in Lismore had not wanted Aboriginal people living in town.

The group heard that as a girl, Aunty Diane narrowly escaped being shipped off permanently to Cootamundra girl’s home. A government social worker arrived in a black car and took Diane and her two sisters from “Cubawee”. If it were not for the family’s quick actions to negotiate their return into the care of other family members, Diane and her sisters would almost certainly have become one of the thousands of Aboriginal children in the “Stolen Generations”.

Access to education was near impossible at “Cubawee”. When Aunty Diane finally went to high school, she understood prejudice for the first time. “The teacher only taught us what we had [already] learned in fourth class,” remembered Aunty Diane. “The other children wouldn’t talk to us.
“We were not allowed a seat on the (school) bus; we had to stand up all the way.”

Aunty Diane deliberately has not told these stories to her children so they didn’t grow up with “a hardness against someone towards to who we have to face”.

“Growing up like that I didn’t know what racism was. I thought it was because it was the colour of our skin that was how it was to be. My children didn’t have to live with that and my grandchildren don’t.”

The families were eventually forced to move from “Cubawee” in 1964 due to flooding. Battles to retain the land have since ensued.

“When we did move from here they fought hard to keep this [country].” Aunty Diane said it is land “worth fighting for. It has not been easy but [our] people are strong enough to sit and argue their cause.” 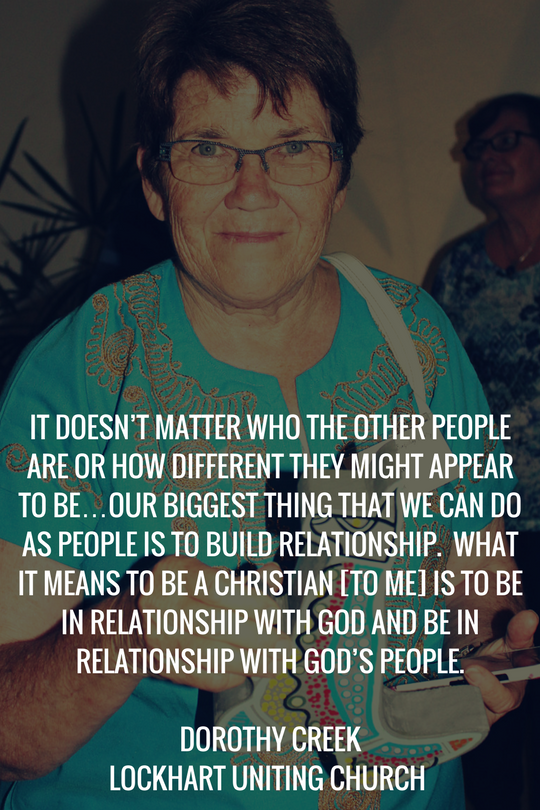 Most notably, it is the everpresent leadership, resilience and family bonds that run deep in the extended Torrens and Roberts families. Their families have been involved in major land title claims on Bundjalung Country, with some success.

The Ngulingah Local Aboriginal Land Council (LALC) in Lismore is led by Aunty Queenie Roberts (Aunty Diane’s sister). Passionate about local Aboriginal issues, Ngulingah LALC is committed to ensuring a better future for Aboriginal people by pursuing cultural, social and economic independence for them, and working for the return of culturally significant and economically viable land.

One local project achieving success is the Nimbin Rocks Project near Lismore. Visited by the “Walking on Bundjalung Country” group, The Rocks are of great significance to the traditional land owners. Gilbert Laurie (Diane’s nephew) explained how skills are learned which are important to Aboriginal culture, linking elders and nature with restoration caring for Country. The project involves plant propagation of local species and a nursery.

Shared with the Bundjalung Country group are challenges such as the impact of Government policy on Aboriginal communities, at a grass roots level. Recent restrictions on fishing and collecting affect the sharing of food at family gatherings.

Another ongoing issue is the lack of housing in Lismore. While the LACL has land, there are no resources to utilise it effectively.
It is hard to imagine just how much resilience will be needed to keep vital initiatives up and running, as Lismore tries to recover from extreme flooding caused by ex-Cyclone Debbie.

Not far from “Cubawee” is Tabulam. This is Tim Torrens’ Country of the Wahlubal people, where Uncle Harry Walker, ordained Uniting Church minister and an UAICC founder also lives with his wife Annabelle. Out of town is Jubullum reserve where Tim grew up.

Tim’s relatives Deb, Mary and Angie (Harry Walker’s cousin) shared their involvement in their local community and culture. They run the Bunawlbu Café and cultural museum where “deadly tucker” is happily shared with the group.

The women are tackling the big issues in the broader community including land rights, drugs, alcohol, and domestic violence. They also seek to keep youth education at the top of the agenda.

Nearby at Jubal, an annual convention is held in the ancient tradition of large gatherings. More than 500 Aboriginal people gather from NSW and southern Queensland. Despite a lifetime of being treated as anything but First Nation People, Tim’s sisters at Jubal graciously affirmed that there is “no colour when we are serving the Lord…We are still battling on… Our dream is to one day see a retreat conference centre.”

It is in the spirit of traditions shared by our Aboriginal brothers and sisters that the group received an unconditional heartfelt welcome to Bundjalung Country. Running deep was an experience of total acceptance, despite injustices of the past, thanks to the generosity and hospitality of our hosts.

4 thoughts on “Walking in unity on Bundjalung Country”