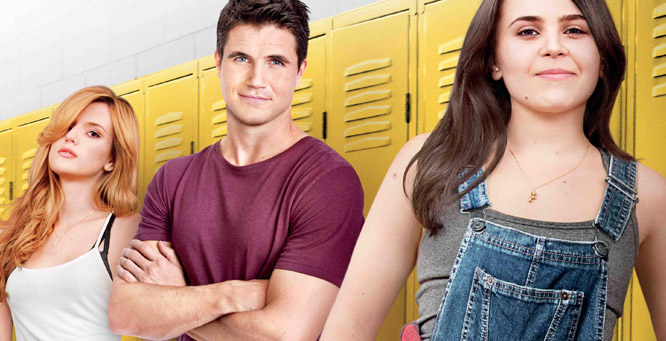 It is a story that feels almost as old as Hollywood itself – love triangle + teenage angst + struggling to fit in = one very familiar sounding depiction of high school life. Centred around the slings and arrows of dating and friendship groups, The Duff is yet another teenage romantic comedy on a list that’s already far too long. But don’t be too quick to cross off The Duff. Director Ari Sandel has managed to elevate his film above this cycle of over-done, over-made teen-flicks, and adds his own refreshing modern twist.

The Duff is the new generation’s Mean Girls, but instead of passive-aggressive gossip and rumour spreading, the weapons of choice are social media and smart phones. It is light, comical, and speaks important yet humorous messages directly to the younger generation, whilst sneaking in a few jokes only the older ones will get (what is a Spinal Tap?).

Bianca Piper (Mae Whitman) is your typical “awkward” teenager. She is smart and funny but not one to follow the crowd. From the outset, Bianca’s alternate taste is made obvious by her never-ending selection of flannelette shirts and collection of cult zombie films. With her two best friends Jess (Skyler Samuels) and Casey (Bianca Santos), she has managed to navigate the complicated world of boys, bullies and even her depressed-turned-self-help-guru mother (Allison Janney). That is, until high school jock Wesley (Robbie Amell), her oldest friend and neighbour, tells Bianca she known to her high-school peers as a DUFF – “Designated Ugly Fat Friend”. This bombshell turns her world upside down and causes Bianca to enlist Wesley’s help, to transform her from a DUFF to the type of girl her high school crush (and token muso hipster) Toby (Nick Eversman) would want to date.

It all sounds eerily familiar – girl likes boy; girl enlists help of another boy to become likable; girl falls for the other boy – but it all seems fresh again, thanks to the perfect pairing of Whitman and Amell. These two alone stop The Duff from being merely a reheat of the “girl gets makeover and becomes desirable” plot. Whitman and Amell are laidback and comfortable. This allows the humour to come naturally, meaning viewers can genuinely enjoy watching their relationship evolve on screen. In particular,Whitman’s natural portrayal of just an everyday teenager is miles away from its predictable counterparts in teen film.

Bianca and Wesley’s relationship develops in a series of DUFF training classes. During these, Bianca is faced with many common obstacles that high-school girl face at one point or another. Key obstacles include online bullying, family struggles, and the constant pressure to fit in with your peers. At times, The Duff‘s underlying message to  “be yourself” and “it’s cool to be different” becomes not-so-underlying – some clichéd lines (“only you can define yourself”) are so clumsy, they make it feel as if the audience is being given a lecture.

However, Whitman and her endearing nature make this movie less of a stomach-turning lesson about self-acceptance, and more about the frumpy funny girl that you seriously want to find in real life and be friends with immediately.

What does the Bible say about the films themes?