Testing the faith of Liam Neeson

Hollywood superstar Liam Neeson reveals his complex relationship with Christian belief and explains why he will never stop searching for answers.

Liam Neeson’s career is one of the most diverse you’ll find. Never a man to rest on his laurels, he’s kicking off 2017 with two typically intense performances, in dramatic adventure A Monster Calls and belief battle Silence. They prove we’ve by no means seen everything the actor has to offer. For Neeson himself, it’s a journey as much as a job. While both productions are wildly different — the former is a heart-wrenching fantasy in which a young boy conjures up a monster to help him cope with his mother’s terminal illness; the latter is director Martin Scorsese’s historical epic focused on the brutal persecution of Jesuit priests in Japan in the 1600s — they prompted Neeson to ask questions about life, death and faith.

“You do think about your mortality a lot more as you get older, not to get heavy about it but you do a lot more because you’re a dad,” says the 64-year-old sagely about himself. “I want to be around for them and that’s a concern. Those thoughts start creeping into your head.” His sons — Michael, 21, and Daniel, 20 — know too well the frailty of life following the death of their mother, Natasha Richardson, seven years ago, after she suffered a head injury while skiing in Quebec, Canada. For Neeson, the death of his wife galvanised him to work harder. He was keen not to be seen “wallowing in sadness or depression” by his sons, and he describes feeling drawn to A Monster Calls precisely because it is about “learning to navigate life and facing the fragility of life and death”. 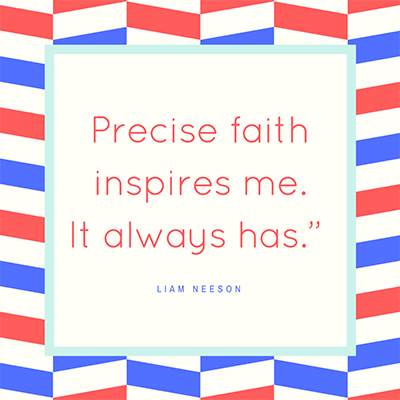 “Children can be shielded too much from the serious issues when they are a lot more capable than we give credit,” says Neeson. “They desire the truth but they’re dismissed, always hearing, ‘You wouldn’t understand!’ Of course they understand. They may not process it the same way, but they get it.”

In Silence, the Northern Irish star and devout Catholic takes on another familiar topic — faith — in his role as Father Ferreira, a Portugese Jesuit priest who commits apostasy (the abandonment of belief) under torture. Starring with Neeson are Andrew Garfield and Adam Driver, as fellow Jesuit missionaries who journey to find their mentor Ferreira in 17th Century Japan — a time when Christianity was banned there.

Based on the 1966 novel of the same name by Shūsaku Endō, Silence is a passion project for veteran director Scorsese – he’s been wanting to make the film for more than 25 years. Given he’s waited such a long time, it might not surprise you to learn Scorsese is a very understanding, considerate man — and boss. “He understands actors; he’s an actor’s director,” explains Neeson. “He makes the space where you exist safe and comfortable because he understands that is necessary to deliver your best; that’s what he requires. He gives you all the tools but ultimately, it’s up to us to construct the creation. That’s appreciated but also incredibly daunting because he’s laid it out for you, and all you want to do is get it right for him.”

Running at two-and-a-half hours, Silence is visually stunning, thematically challenging and often brutal, as it depicts Japanese officials seeking to combat Christianity among peasants. Those officials tortured the missionaries who preached the gospel, until they relinquished their faith.

Neeson’s own relationship with faith is complex. Brought up Catholic in Ballymena, County Antrim – a predominantly Protestant town – he confesses that he has “always doubted” his faith. “At various times in my life,” he admits. “But I don’t believe you can have deep faith without serious misgivings and I think my misgivings, my doubt, will stay with me until the day I die. But I’m proud of always asking questions, and know full well I’ll never learn the answers. That won’t stop me asking.”

In the 1986 British drama The Mission, Neeson played a Spanish Jesuit missionary. During filming, the then 33-year-old Neeson met Father Daniel Berrigan, a Jesuit poet, priest and activist who served as an adviser. The two shared many spiritual discussions, but Neeson says “nothing was resolved”. “The same happened after working on this with Martin,” he says.

“I read [Richard] Dawkins’ The God Delusion, many books like that. Science journals, learning about the workings of the human brain and what it can do, how the brain can rewire itselfs… the brain can trick itself into believing what another large group are believing. That’s one scientific explanation behind [religious beliefs]. And then I look to my mother, a beautiful woman with a beautiful heart and soul, chastising herself because at 96-years-old she’s not able to walk to Mass. And that precise faith inspires me, it always has.”

Silence is in cinemas from February 16.