As a Christian film critic, a regular question posed by well-meaning people of faith pertains to the support of an industry that regularly rails against the religions of the world and specifically toward Christianity. What seems to be a simple question is a multi-layered discussion that touches on theology, philosophy, sociology, psychology and even personality. With all of these potential angles of debate, the answer will have to be broken down into numerous short articles. Any of these fields of study offer opportunities to engage with this subject, so why not begin this investigation with how you view the world.

For everything comes from him and exists by his power and is intended for his glory. – Romans 11:36

Billions of people have inhabited this planet and each person develops a unique perspective on the world. There have been attempts to break it all down into different worldviews, but realistically these labels eventually fall short of explaining the human condition as you peel back the layers. It does not take too long to realise that each person has developed their own unique ‘filter’ for how they think and relate to others. This process merely begins with the things that most sift their thoughts and emotions through each day. The list begins with family, education, religion, the internet and even our entertainment choices, but is not limited to these social structures. Each dimension adds to our experience and allows different elements to penetrate through to influence and define our lives. It could be said that these are core influencers that impact every human’s life, but throughout history, some things change and some remain the same.

In our world of disengaged and plugged-in individuals, film offers a fascinating means of discovering the filter development of those in your influential orbit. Over the last century, the film industry has given historians a means of knowing what were the key indicators and influencers in various cultures. 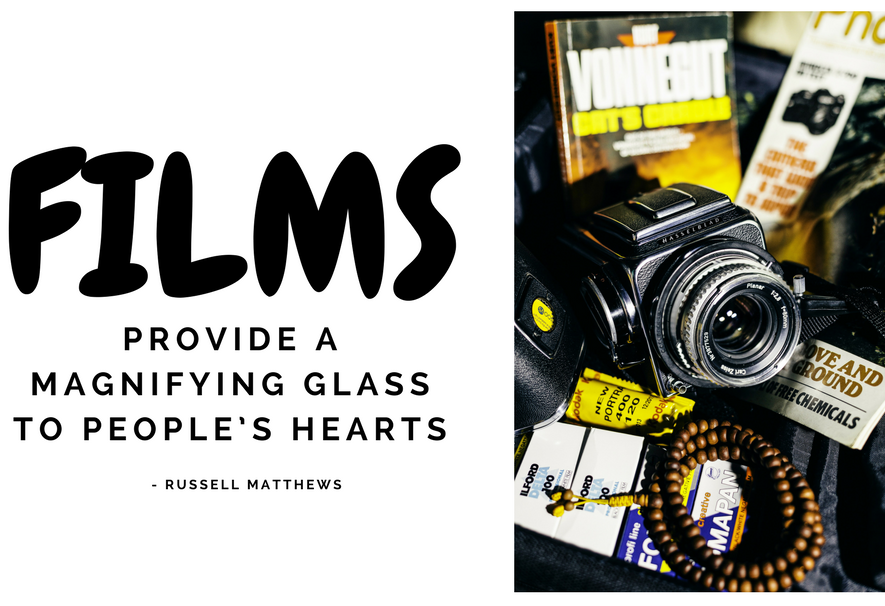 How does all of this get us closer to answering the question of supporting the film industry as a Christian? Not to be overly philosophical, but if someone wants to know what is going on in the minds of the people who come into your world, films provide a magnifying glass to people’s hearts. Most people are encouraged to avoid the topics of politics and religion in polite conversation, but it is not hard to find out what people’s views are on these subjects and more. Merely ask them about the last few films they took in or the recent television show that they binge-watched on Netflix. Then ask them what their thoughts are on the content within these entertainment choices and get ready for a smorgasbord of discussion opportunities.

“Let your conversation be gracious and attractive so that you will have the right response for everyone.” – Colossians 4:6

As a Christian, the study of the Bible affords us the ability to address everything that comes along via these conversations. The Bible is filled with stories of sexual promiscuity, murder, violence, hatred, bullying, corrupt politics and religious persecution. No one would state that the mention of these topics means that the Bible or God condone them, on the contrary. What it does show is that Christianity should have a realistic view of the world and provides an answer to all that seems right or wrong with it. These ancient words also equip the Christian to know how to respond to the situations and conversations that occur every day in private or in the public square, especially all that various films have on offer.

There is nothing on the big or small screen that has not been acknowledged or discussed in the Bible.

Keep in mind that not all films are good for building up and people should take time to discern if specific movies are worth their time. Some individuals may come to realise that the cinema is not the right place for them, which is their prerogative.

These choices do not mean that everyone else should fall under this personal expectation. Being someone who has the privilege of critiquing film regularly, the decision is to see movies and catch the potentially rare glimpse into the hearts of humanity. It is not a matter of condoning all stories that are delivered via film, but looking for the opportunity to engage with this world through the topics it presents.

Russell Matthews works for City Bible Forum Sydney and is a film blogger.

PrevPreviousThe cost of your reputation
NextPathways: Setting a course for the futureNext