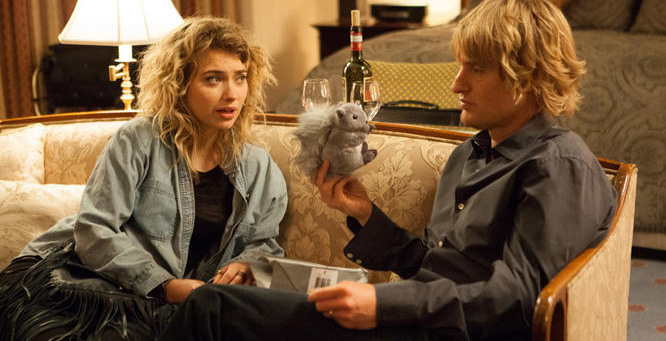 She’s Funny That Way is an attempt to show how Hollywood provides ordinary people with the opportunity to dream. Legendary director Peter Bogdanovich focuses his lens on the Hollywood dreamer, Isabella “Izzy” Patterson (Imogen Poots). She spins a retrospective tale of the relationships in her life and how they propelled her from call-girl to acting success. It is a less-than-believable fairy tale of happenstance and mayhem that connects the lives of the cast and crew of the Broadway production, A Grecian Evening. The play’s director, Arnold Albertson (Owen Wilson), finds himself in the precarious position of casting Izzy in the play, even though he knows her from her career as an escort. The female lead of the stage production is his wife Delta (Kathryn Hahn) and her ex-lover Seth Gilbert (Rhys Ifans), which leads to a surreal series of inter-connected, comedic situations. Then adding to this bizarre narrative is Jennifer Aniston (Friends) who plays Jane, Izzy’s self-centred therapist. She is in a failing relationship with Arnold’s playwright Joshua Fleet (Will Forte), who is drawn into the gravitational pull of the young actress orbit.

Reminiscent of screwball comedies from the ’40s through to the ’80s, this screenplay by director Peter Bogdanovich (The Last Picture Show, Paper Moon) was pulled out of mothballs from a bygone era. Not to mention that Bogdanovich has not directed a major motion picture in 12 years. She’s Funny That Way seems to have the potential to honour his cinematic past, but has become a misstep in a memorable career.

There was very little that was redeemable about the film. Most of the actors seemed to be walking through their roles as if it was the first and only take of each scene. Aniston wins the best over-acting award of the year and Poots provides the most unforgivable and distracting Brooklyn accent in recent memory. The only redeemable performance was Illeana Douglas as the reporter who hears Izzy’s adventure. Her cynical tone and delivery add the rare comedic twist in the otherwise humourless storyline.

Bogdanovich’s reliance on a coincidental series of events lacks the comedic timing to provide the needed humour for this type of film. As a result, it remains stuck in the mire of celluloid mediocrity. He states that this was his love letter to New York City, but he must have not added enough postage for it to be delivered properly.

She’s Funny that Way will only appeal to the most loyal of Bogdanovich’s fans, but does open the door to some of life’s bigger queries. A key theme was the futility of trying to hide personal transgressions. Even though the veteran director tries to paint Wilson’s character as a flawed man with a good heart, Arnold Albertson proves that all sins are found out in the end. This central character attempts to hide his past, but each lie pulls him into a vicious cycle of self-deception. The film is a tangled web of the human condition and proves that when confronted with temptation, the best choice is to turn and walk away. Which is what you should probably do instead of purchasing tickets to see this forgettable comedy.