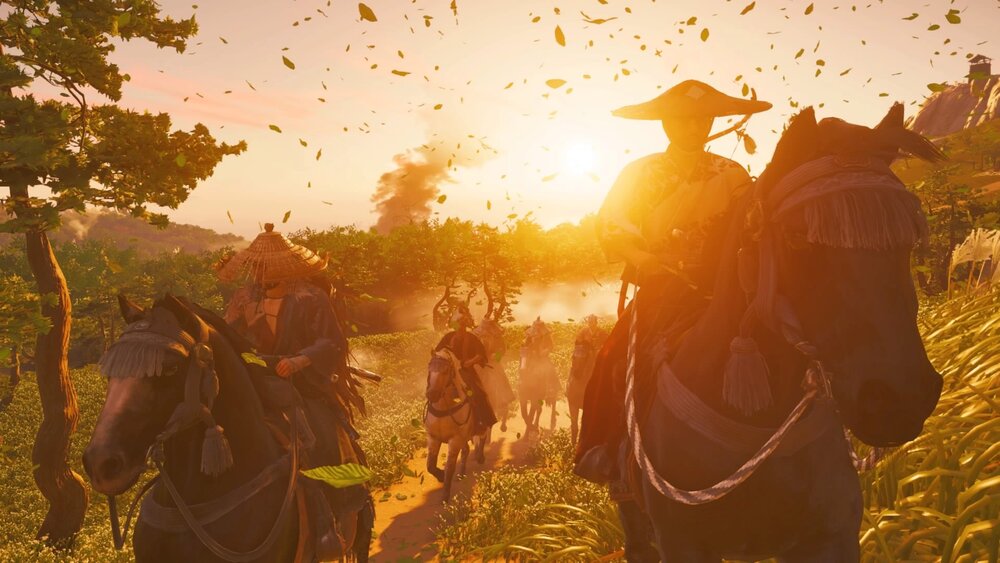 Releasing in late June, Ghost of Tsushima is an experience to behold.

Set on Japan’s Tsushima island in the 13th century, the game sees the island being taken over by an invading fleet led by Mongolian warlord Khotun Khan. In trying to resist, Tsushima’s army of Samurai are killed and their leader, Lord Shimura, taken hostage. The protagonist, Shimura’s nephew Jin Sakai, is left for dead on the battlefield but nursed back to health by the thief Yuna. Sakai quickly realises that he cannot meet the greater force of the Monguls head-on, in accordance with his Samurai tradition of looking his enemies in the eye and killing them with respect and honour. With his depleted armour, he must forge a new tradition if he is to hope to have any chance of survival.

Read in a surface way, this story about Samurai and their code of violent honour has little to offer a Christian audience. And yet, Ghost of Tsushima has depth for those willing to play and consider it thoughtfully. The game’s story is essentially a tale about the battle between old ways and change, and how traditions must be considered in new contexts. The honourable ways of Tsushima’s Samurai are plunged into doubt against a bigger and stronger adversary. Sakai must struggle between his desire to free his family and friends and the vows he was raised to uphold.

This tension between tradition and new circumstances (and whether it is possible for traditions to be reconsidered or if new fashions should be resisted) is a constant theme in the Bible, recurring over matters such as whether gentiles can join the church and the role of foreigners in Israel. For the church today, this same struggle rears its head in new and different ways.

At this late stage in the Playstation 4’s lifespan, Ghost of Tsushima shows that the console has capacities that it has not showed off. The game is one of the most effective examples of videogames design from the past few years. Insights played the game on a base model Playstation 4, and was constantly impressed by the graphical results, with no slowdown. The game would undoubtedly perform even better on the Playstation 4 Pro or the forthcoming Playstation 5 (which will be backwards compatible with most Playstation 4 games).

The titular island is rendered in stunning detail, with cherry blossoms, flowers, and falling leaves all providing a sense of place that should help satisfy those with wanderlust who cannot visit Japan right now due to the COVID-19 pandemic.

What makes all of this all the more remarkable is that Ghost of Tsushima is not the work of a Japanese studio. Developers Sucker Punch are based in Bellevue, Washington, and drew on a wide number of reference materials for the creation of the game’s authentic-feeling world.

Of course, as may be expected with a Samurai game, Ghost of Tsushima is violent. The game’s combat ends each time with the player spilling their opponents’ blood. While the effect is in its own way stylistic and even aesthetically beautiful, some may find this confronting.

Another astounding aspect of Ghost of Tsushima is the way the game allows the player to cater the presentation to their liking. Players have the option to view the game in English without subtitles, English with subtitles, or in Japanese with English subtitles. The game’s Kurosawa mode is perhaps the most interesting of these options. Named for Akira Kurosawa, the Japanese film auteur behind the likes of Seven Samurai, this mode puts the game in black and white with Japanese dialogue and English subtitles. The game isn’t a mere palette swap of the main version either, with Sucker Punch’s Jason Cornell researching filmmaker’s use of shadow and weather effects and incorporating these in the mode (with the Kurosawa estate’s backing). That Ghost of Tsushima allows players this choice and wears its inspirations on its sleeve is yet another added benefit to the game.

Where Ghost of Tsushima falls short lies in the overwhelming way that it lays out its mechanics. Shortly after the game’s breathtaking introduction, players find themselves immediately thrust into an open world, with markers and things to do. For someone looking to merely experience its story, told as well as it is, this may prove to be off-putting. The game’s wind mechanic, which guides the player as to where they should head next, is initially interesting, but can at points prove to be frustrating.

When the various Game of the Year awards roll around, a number of titles will undoubtedly be in the mix, including the Last of Us 2, Dreams, and Animal Crossing. Barring a late arrival blowing down the doors in the last quarter, however, it is hard to see any of these worthy titles beating Ghost of Tsushima for the honours. While far from perfect, the game is an unforgettable experience to behold, and a timeless story about the ongoing struggle between tradition and new circumstances.

Ghost of Tsushima is available now on Playstation 4.

PrevPreviousIs this Jesus’ face?
NextIs this one better than the original?Next