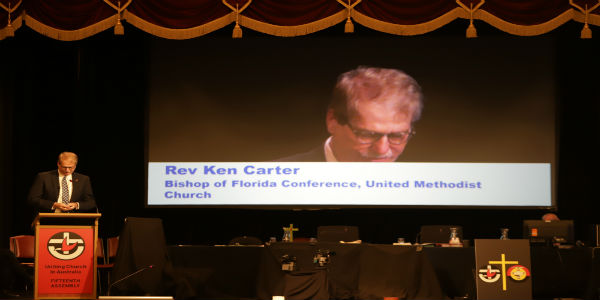 Rev. Dr Ken Carter has called the Uniting Church into fresh expressions of faith through prayerful listening and service in his Cato Lecture to the 15th triennial Assembly meeting.

The wide-ranging address creatively interpreted our Assembly theme, “Abundant Grace, Liberating Hope” – where Rev. Dr Carter reminded us that the church needed to take time with its prayerful discernment.

“If we are spiritual leaders in positions of oversight, we are called to undertake the integrative work of diagnosis and discernment with great seriousness,” he said.

“The Lord, speaking through the prophet Jeremiah about the qualities of the prophets and priests in the sixth century B.C., gives voice to our crisis:  “They have treated the wound of my people carelessly, saying peace, peace, when there is no peace.””

“Spiritual leadership is of vital importance because there is a great deal at stake—in many communities the health of the faith community and its capacity to support and engage is the difference between life and death for many, especially children and youth.”

Rev. Dr Carter said he had been “taken” with the Uniting Church Constitution’s Preamble acknowledging First Peoples, as it reflected God’s pre-eminent grace.

The chance to reflect

Rev. Dr Carter told Insights that the Cato lecture provided the opportunity for members of the Uniting Church in Australia to take a moment to reflect, away from the usual business of the Assembly meeting.

“Taking the time to reflect is like getting out to the balcony,” he said.

“It allows us to think theologically.”

Rev. Dr Carter’s address coincides with the time where the 15th Assembly body is in conversation about marriage and same-gender relationships.

Rev Dr. Carter said it was important that the church is having the conversation.

“The church has had challenges in the past.”

”I’ve never believed this is a church-dividing issue.”

Rev. Dr Carter said he was “greatly honoured” to give the Cato Lecture in the same Assembly where his and his wife Pam’s classmate at Duke Divinity School, Deidre Palmer, was installed as President of the Uniting Church.

“I said this to Deidre: when they ask a person to serve in this role, they play an important leadership role in their church.”

Rev. Dr Carter said that he believed that God often provided church leaders “for a time such as this” as part of his providence and that Dr Palmer is well prepared for the role.

“Our friendship goes back to our time [in Divinity School],” Rev. Dr Carter said.

“She has a deep theological grounding.”

“She will have an entrée everywhere in Australia where the church is present.”

The Cato lecture is a long-standing tradition dating back before our union in 1977, when it was a Methodist event. It is named after Fred J Cato, a businessman responsible for the Cato charitable trust.

Rev. Dr Carter is president of the Council of Bishops of the United Methodist Church, which is composed of twelve million members in Africa, Europe, the Philippines and the United States.

He also serves the Florida Conference, which includes a region that stretches from Jacksonville and Tallahassee to the Keys.

He has been particularly well known for his statements on gun-violence, following the recent tragedy at Stoneman Douglas High School.