Remembering, with Families and Friends for Drug Law Reform 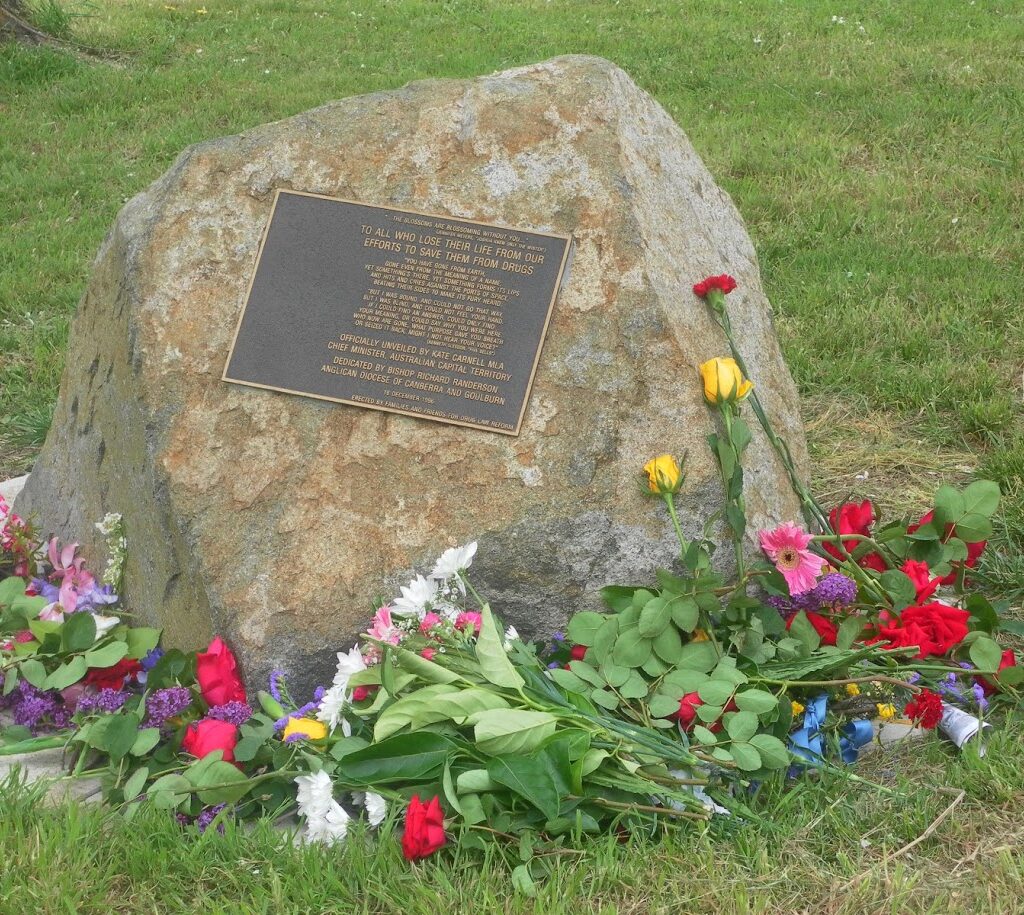 The location, beside a memorial on a stone under a locust tree (Robinia pseudoacacia), was chosen for the first ceremony in 1996, because of its particular associations for the family of one of the members of FFDLR, whose brother had died earlier that year. The blossoming locus tree under which the memorial stone lies is a potent symbol for the event: an expression of hope in the midst of remembering and honouring those who have died. This year, however, the ceremony took place online on 25 October.

Bill Bush, Chairperson of FFDLR (and member of St Ninian’s UCA in Canberra), noted that “these avoidable deaths have ballooned out to at least 20,000 people since that first ceremony. Then, as now, opiate overdoses have been the main cause. The make-up of those who have died”, Mr Bush advised, “has changed from generally troubled young people trying to cope, pushing boundaries and risk-taking, as young people have always done, to include older Canberrans who, in desperate search for inadequately provided pain relief, have had recourse to illicit substances. There are those who in desperation to shed themselves from a dependency have taken their own life without the aid of any drugs.”

The ceremonies have brought out of the shadows the promise and worth of those who have died and enabled grieving families and friends to draw aside the curtain of shame and stigma with which an unfeeling society has shrouded their loved ones. A number of Uniting Church leaders have spoken at these ceremonies in years past, including Presidents Sir Ron Wilson and Rev. Gregor Henderson, and (last year) the Moderator, Rev. Simon Hansford. You can read some of the addresses given over the years here.

Every year, a local politician speaks at the ceremony—this year it was Peter Cain, MLA for Ginnindera, who chairs the Select Committee considering the Decriminalisation Bill that is currently before the ACT Legislature. In addition, a family member of someone who has died speaks at the ceremony—this year, Janine Haskins, whose 23 year old daughter, Brontë, was driven to believe that the only relief available to her was to take her own life. She bore witness to a tragic sequence of events leading to the death of Brontë in 2020.

This year, also, the Rev. Dr John Squires was invited to preside over the roll call of names of people who are being remembered, and to speak as a representative of people of faith. Rev. Dr Squires indicated that the Uniting Church has a strong commitment to stand in support of those who have been bereaved in this situation. In recent years, the Uniting Church has developed the Fair Treatment campaign, in which we have joined with over 60 partner organisations, and many concerned individuals, to affirm that policies and laws must not stigmatise and marginalise the most disadvantaged people in our community.

Rev. Dr Squires told the gathering, “The man who shapes the perspective of the world that I adhere to and seek to follow in my life is the man from Nazareth who sat, befriended, listened, questioned, encouraged, challenged, enriched, expanded horizons. This man from Nazareth would not validate the harsh, uncaring, depersonalising course of action that many of your loved ones have experienced as they grappled with drug dependency, suicidal ideation, or the intensified pain that came with age and disability. By trusting in the way of the man of Nazareth, I place my faith in the positive and hopeful dimension of humanity.”

He noted that Jesus had affirmed what the sages of old had long declared: “We human beings are made in the image of God. Our very beings “radiate the glory of God”. At our own creation, the breath of God was breathed into us, infusing our being with all that God is, all that God offers. Our very beings contain within them the potential to be life-affirming, world-embracing, in hope-filled living, in loving relationships, in caring compassion. Each human being therefore needs to be accorded dignity and respect, as a person bearing the mark of the divine, with the breath of the divine inspiring and enabling our very being.”