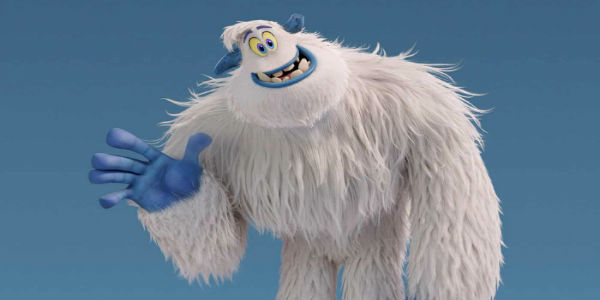 NOTE: This analysis contains spoilers. Please bookmark this page and return if you would like to watch the movie.

Smallfoot was one movie that I figured I could skip watching. The animated trailer encouraged me to dismiss it as a silly childish romp, with little to offer an adult viewer. I could not have been more wrong. It turned out to be one of the most theologically provocative movies for me in 2018.

The movie starts with the main character, a yeti named Migo (voiced by Channing Tatum) telling the history of his village. He, along with all the other yetis, live high on a mountain above the clouds. They live according to a series of laws, literally carved into stones and worn by the Stonekeeper (voiced by Common). According to the stones, the yetis were created by a yak god (via defecation!) and left on the mountain. The mountain is held up by a group of oxen that must be fed, or their village will fall into ‘The Great Nothing’. Migo and the other yetis are happy and peaceful, which they consider ‘Perfection’.

The opening dialogue gives way to a visually beautiful fly by of the Yeti village accompanied by a song (composed by brothers Karey and Wayne Kirkpatrick) showing a typical day in the life of the Yeti village. It is a scene of harmony and enjoyment as the Yeti’s work together to feed the oxen. Tellingly, however, the lyrics blatantly reveal that no one is to question the law or challenge the stones. In fact, they are to actively squash all questioning or doubtful thoughts, pushing them down inside.

These two opening scenes paved the way for a wonderful adventure where Migo accidently finds a Smallfoot, or human, a creature that he has been told all his life was just a myth. A group of yetis called the Smallfoot Evidentiary Society, or S.E.S., led by Migo’s crush Meechee (voiced by Zendaya), encourage Migo to find the mythical creature and prove that there is something beyond their own land. A series of misadventures finds Migo doing exactly that.

In the process however, Migo discovers that the Stonekeeper has known about the Smallfoot all along. Their stone written history is actually a carefully crafted story designed to keep yetis safe from humans whose violent history had led the yetis to scale the mountains to heights where the Smallfoot couldn’t survive. The truth has been completely and deliberately hidden from the village.

Smallfoot starts with a theological framework that shapes the yeti’s beliefs, actions and interactions with one another. They have a way of life as a consequence that feels safe and harmonious. Ultimately, however, it was based on a lie. Any dissent had to be kept secret. The whole community has to go through some hard self-reflection and brave actions to come to terms with a new reality – they are not alone and they can coexist peacefully with humans. Interestingly, the humans have to go through a very similar process.

Smallfoot has something to say to Christian theology. Where does our ignorance of a larger picture and our theological worldview actually prevent us from seeking and acting in truth?

We have a few historical cases to teach us. Galileo championed heliocentrism, an astronomical model where the earth and planets revolve around the sun. This put him at odds with the church who mostly subscribed to geocentrism, where the earth is at the centre and everything else revolves around it. He was tried by the Roman Inquisition in 1633 and found guilty of heresy, spending the rest of his life under house arrest. But science and history have proved Galileo right (to this point in time) and the church had to change its position.

Slavery has, in the past, been accepted and even defended by the Church. With efforts by people like William Wilberforce in England and the Mennonites in America, slavery is almost universally condemned by the Church today.

The Uniting Church can take pride in the historical legacy it has of valuing women as full and vital members of congregations, able to teach, preach and lead at all levels. Its theological wrestling allows it to sit in a place that few other churches have arrived at yet.

But where do we still have unhelpful blinkers?

What if we were to find that the asylum seekers now interred on Nauru, Villawood or Christmas Island were not all terrorists, or queue jumpers, or illegal immigrants at all? What if we were to find that they were human beings, just like us, trying to find a safe and secure place to raise their children? What if they believed Australia was that place? How would that change our beliefs and actions, our conversations around this issue?

What if science were to clinically prove that sexual orientation was biologically determined and that one could not choose who one was attracted to? How would that change how we treat those who identify as LGBTQIA? Would our theology of sin have to be rewritten to accommodate the evidence of science and genetics?

The Uniting Church is grounded in a tradition that encourages this difficult theological reflection. The Basis of Union states ‘The Uniting Church lives within a world-wide fellowship of Churches in which it will learn to sharpen its understanding of the will and purpose of God by contact with contemporary thought. Within that fellowship the Uniting Church also stands in relation to contemporary societies in ways which will help it to understand its own nature and mission… It prays that it may be ready when occasion demands to confess the Lord in fresh words and deeds.’

Perhaps even an animated children’s movie can be used by God to make us think about our theology, and the consequences of living that out faithfully, wisely and lovingly in our world.

Smallfoot is available on DVD/Blu Ray and iTunes