Mobile phones do not stop hunger

Most people in West Timor live on less than $2 a day. Yet in spite of their very significant poverty, many of them have mobiles, and this is true of people in most developing (and developed) countries. More than half of India’s sprawling population own phones – more, in fact, than own toilets. In
the US, poverty is a massive problem and it’s increasing, but people will go without food before they give up their phones.

Okay, then, these people can’t need our help too badly; that’s what our logic would tend to start shouting at us.

Because if they have mobile phones, how bad can their situation be?

Here’s where our understanding of poverty shows up in all its frailty. It takes relatively little to own and maintain a resource like a mobile phone – you outlay the cost, pay a bill. But the impact is immediate and ongoing – from life-giving relationships to staying safe, having access to vital information and being able to bank or trade easily.

On the other hand, changing major infrastructure like access to electricity, education and employment takes time and major investment.

In West Timor, I watched a man with virtually no sight, who works as a masseur, use his mobile to line up clients in Kupang. The mobile was voice activated – he couldn’t even see the screen. Thanks to a loan that helped build up his business, he earns around $5 a day. This has improved his life, but he still draws his water from a well next to the house. It’s often pretty dirty. 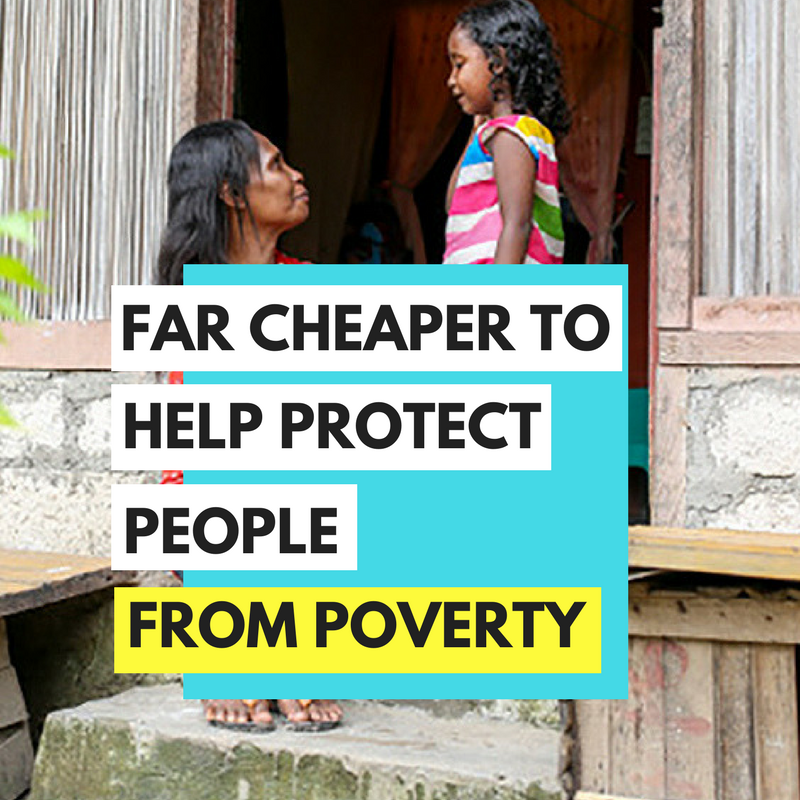 There’s no doubt that the poorer, more desperate we think people are, the better we feel about giving to them. But does this make sense? It’s a source of never-ending pain to me that many of us only give once the pictures of Africa’s starving children or the Pacific’s floating bodies are all over our television screens.

It’s as though people are not really ‘poor’ or ‘desperate’ enough in this world to warrant our attention or generosity until they’re actually dead, or near enough. And yet, if we invested just a layer above – at those who own the mobile phones and are starting to make their way in the world, no matter how difficult it might be – we could save hundreds of thousands of lives and millions of dollars. Shouldn’t this sheer numbers return on investment make us feel better about our giving than simply how tragic the situation is at the time?

In fact, one dollar invested before disaster can save fifteen after tragedy strikes.

That’s because it’s far cheaper to help protect people from the crushing poverty that makes them vulnerable to disaster, war and disease than it is to help them recover afterwards. Proper investment in the lives of people in South Sudan, Nigeria, Ethiopia and throughout the Horn of Africa three years ago could have prevented what’s now being described as the greatest food threat since 1945.

But no. Some thoughtless person probably took photos of people carrying mobile phones.

Through a partnership with UnitingWorld and the local church in West Timor, 135,000 families have already been assisted through small loans to build lives for themselves that are meaningful and dignified. Don’t get me wrong. By anyone’s standards, they’re still poor. But investing in these communities is about looking ahead and creating a whole society of people more likely to resist disease, conflict, radicalisation and the impact of changing climate, including devastation from natural disaster.

Right now, UnitingWorld is eligible for special funding that recognises our development expertise and the generosity of our donors. For every $5 we can access, we must raise at least $1 in supporter donations. In effect, this means gifts from Uniting Church people are six times more useful to us in the field, combined with Australian Aid funding.