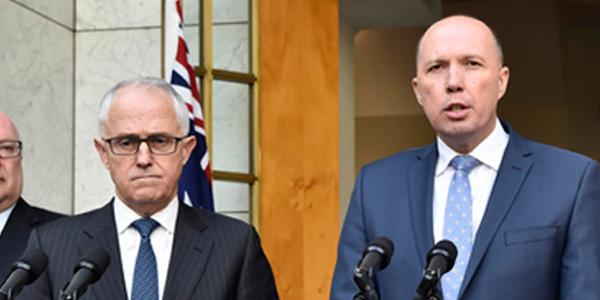 Home Affairs Minister Peter Dutton resigned from his portfolio, after losing the vote, with 35 votes to the Prime Minister’s 48.

In a press conference, Mr Turnbull appeared forgiving towards his challenger, who he offered to stay on as Home Affairs Minister.

“We’ve got to put 25 million Australians first. They hate it when we are talking about ourselves.”

A Cultural and Spiritual Problem

As Home Affairs Minister, Dutton was responsible for overseeing Australia’s immigration policies, including the detention of asylum seekers on Nauru and Manus Island.

Love Makes A Way’s Justin Whelan told Insights that Dutton’s departure from the portfolio did not automatically mean a shift in Australia’s asylum seeker policy.

“I think it’s fair to say that no one who cares for people seeking asylum is sad to see the back of Peter Dutton but this is not about him alone,” Mr Whelan said.

While Mr Whelan said that Dutton “deliberately scapegoated people seeking asylum” he believes “There is no reason to hope that his replacement will be any more minded towards hope or justice.”

Instead, Love Makes A Way remains concerned about Australia’s bipartisan asylum seeker policy and treatment of refugees, which they consider, “a cultural and spiritual problem in Australia.”

Rev. Dr John Hirt is the former Uniting Church Chaplain at the University of Sydney. Rev. Dr Hirt told Insights that, “…[T]he country would be a lot better off without the amount of hubris being shown by people like Peter Dutton and his cold and dispassionate attitude towards refugee people.”

He said that in a world where some 65 million people are estimated to be displaced, “It is to be hoped that our Prime Minister Turnbull along with other world leaders will show a greater sense of compassion to the most vulnerable and needy in our world.”