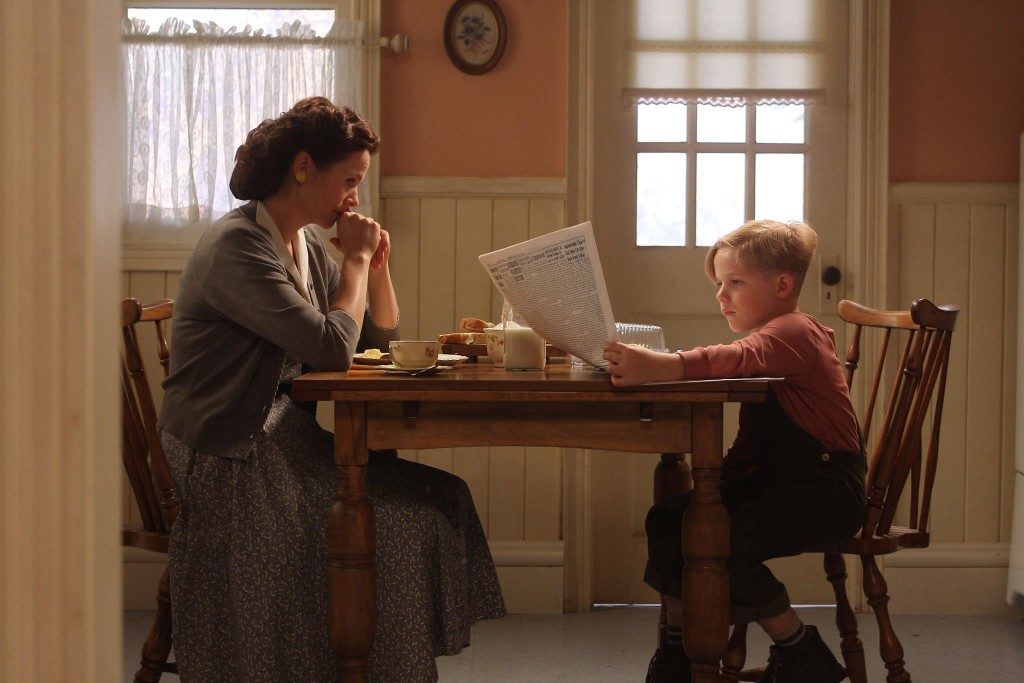 “Partner, do you believe you can do this?”

That’s the catchphrase that comes to define the central relationship between Pepper Busbee and his Dad James in the family film released in cinemas this week — Little Boy.

Little Boy is the 1940s era story of Pepper (Jakob Salvati), a boy of diminutive stature who is bullied by his peers but has faith that his father will come home from his tour during World War 2. Pepper’s stature belies the giant faith that he has in God to bring his father home. Drawing strength from Matthew 17:20 and the fact that even the smallest faith can move mountains he believes anything is possible.

When the local priest, played by Oscar winner Tom Wilkinson suggests that in order to strengthen his faith, he has a list of tasks to perform, including befriending the local Japanese man — who is marginalised and ostracised by the community – the film is given some welcome bite and social commentary, even if it is a bit stereotypical.

Unlike the usual faith-based films that serve up platitudes and preach to the choir, the film does deal with the subject of belief well. More specifically how and what to place belief in.

“Your faith won’t work if you have the slightest bit of hatred in you,” suggests Wilkinson’s priest. Wise, if simple words of wisdom.

Elsewhere the film is rather prosaic in the way it deals with bullying in Pepper’s life, with the metaphor that the smallest member of the town is the one with the biggest resilience and faith, this is the solid and standard narrative that films like this tend to deliver.

Executive produced by Roma Downey and Mark Burnett (Son of God, The Bible Mini series, AD) and directed by Alejandro Monteverde, whose last film was Bella, an independent feature released a decade ago, this is a competent and assured film with higher production values than you would expect and a more professional cast than usual faith-based fare.

While faith-based films have had a bit of a rough trot in cinemas lately, particularly in Australia, and often vary wildly in quality, this is a high-quality family film that will especially warm the heart this Father’s Day.

Many faith-based films tend to present a rather saccharine view of belief as a “magic” or “miracle” cure-all, Little Boy suggests that life is about our choice to believe in what is right – love, compassion, care and grace – for those around us.

At it’s heart Little Boy is a film about a father’s devotion to his son. Some may find it over sentimental, and there are a couple of scenes particularly involving the bombing of Hiroshima that jar giving it an uneven tone in the second act, but the film stands out from its faith-based counterparts in a way that should garner your attention.

PrevPreviousWhen is a human not a human?
Next4 Critical Reasons Christians Must Care about JusticeNext