The great Australian Dream is dead. At least, it is in Sydney, the most populated city in the land of wide-open spaces, quarter-acre blocks and expensive studio apartments.

Officially ranked as the second most unaffordable house market in the world (after Hong Kong), Sydney has become a housing nightmare for many. An annual report released this year by research group Demographia announced Sydney’s average cost of housing to be 12 times the average household income. Ouch. Demographia suggests a housing market is “affordable and healthy” if the average cost of buying a house is up to only three times the average household income. Ouch and ouch.

If you are trying to buy a place to live in Sydney in 2018, prepare for ongoing trauma to your hip pocket, even if you earn more than average. But what if you earn less than average — or less than that? Or you are unemployed? Or homeless? Sydney seems close to inhospitable or uninhabitable for anyone not pulling in a king’s ransom.

Parramatta Mission is an unusual, notable Uniting Church located at the heart of what is the geographical centre of Sydney. Parramatta is one of Sydney’s major suburban CBDs, a thriving mini-city of business, development and culture. Since the 1970s, the Uniting Church in downtown Parramatta has been doing what it can to support vulnerable, poor and mentally ill people in its community. With cost of living in Sydney threatening to destroy anyone not made of money, Parramatta Mission’s accommodation and social services have only increased in value.

InSpiring the Common Good is a five-point theological explanation of why Parramatta Mission does what it does. In detail across several pages, it outlines the biblical backing for why Parramatta Mission headquarters wants to be “a place of life and worship, community and practice established in the hospitality of Christ”. Amazingly, InSpiring the Common Good was put together to support a $42 million development proposal for its site.

When the proposal was submitted this year to City of Parramatta Council, InSpiring the Common Good went with it. Imagine! A $42 million development proposal — including innovative accommodation solutions — being presented to a City Council, accompanied by the Christian beliefs and thinking which inform it. Such a combination suggests it is possible to do what too many can think impossible —apply Christianity to real-life situations.

“When we have engaged with Council, we’ve begun by talking about our theological understanding. We’re not saying to Council they have to become Christians or, if you like, buy our theology, but you do need to understand so that you can understand why we are doing what we are doing.” 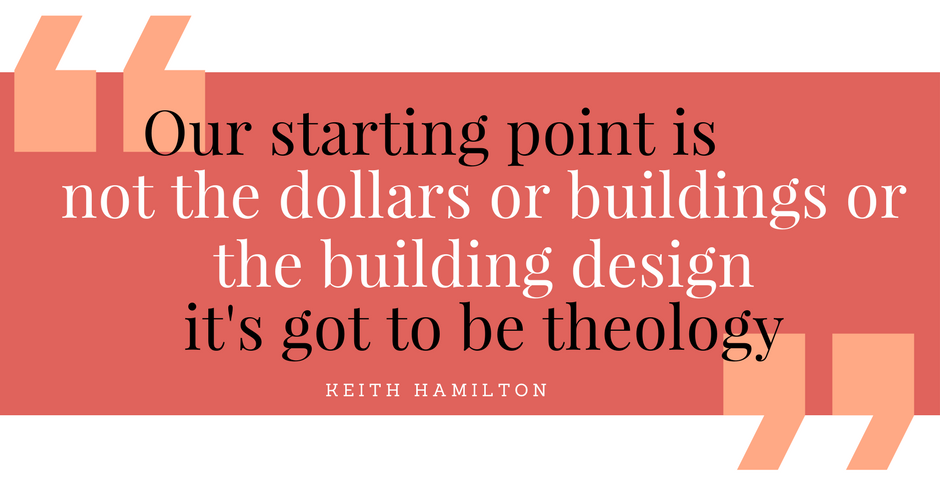 Keith and his Parramatta Mission Congregation are a community wanting their Christian priorities to be the foundations of what they do in their community. And much of what they are doing for their community is at the extreme end of the housing affordability crisis. While Keith has suggestions for how to broadly address the costs of living in Sydney [see side panel], the massive redevelopment of Parramatta Mission centres on responding comprehensively to homelessness in Parramatta.

Parramatta Mission already offers significant accommodation and mental health services across Sydney and beyond (extending to the Central Coast and Hunter Valley). But it hopes to get approval to build a housing hub that would allow vulnerable people to transition through different stages of accommodation, in the one location. Being called Common Ground, this socially conscious hub on the redeveloped Parramatta Mission site also would offer employment opportunities.

Subsidising the cost of Common Ground would be private accommodation and business premises, located alongside the crisis and social housing. Parramatta Mission’s integrated scheme for helping to combat homelessness aims to not rely upon Government funding, which means it would remain free to set its own Christianity-informed agenda.

The expected annual cost of running Common Ground is in the ballpark of $3.5 million. Such a massive financial outlay reflects Parramatta Mission’s theological approach to the value of those God has created. “I think the bottom line is that everybody is made in the image of God and certain things flow from that, in terms of value, worth and those sorts of things,” summarises Keith.

Despite Australian society projecting that our worth is found in what we achieve or what we do or who we marry or how much money we have or the house we buy, Keith points us back to truth that Parramatta Mission is based upon. “Our baseline identity is someone who is loved by God. Of course, someone living on the street forgets that, naturally. Mind you, most of the population forget that, to their great detriment.”

“Intrinsic to who we are is to have somewhere to live and to be in relationship. To be on the street or sleeping rough tends also to coincide with broken relationships.”

Keith isn’t trying to oversimplify the causes of homelessness. Instead, he’s reinforcing how followers of Jesus Christ know that no matter what else is said about housing issues, God did forge humans in relationship, for relationship. That foundational reality makes an ongoing and distinct difference to the reality of dwelling on earth. God is a God of community with us. God cares not just for an individual, but for all. God went so far for right relationship with us that, as Keith notes with admiration, God limited himself to human form for a time. “There is a complete identification of God as one of us, among us, in Jesus,” says Keith, before listing off things Jesus went through that every one of us experiences (such as birth, hunger, tiredness, work and death).

“Theologically, I think everyone has the right to have whatever they need to be able to live life to the full. So, whatever we need to live life to the full, that’s a basic right that we have. ‘To live to the full’ is different, person to person, but it is to use the abilities and gifts we have to make a contribution to the wider society in which we live. To engage with people; to have a community in which we can contribute and be supported; to have sufficient food to eat; to have relationships; and to have somewhere to sleep and rest.”

Given how much Keith has emphasised the Christian underpinnings of what Parramatta Mission does, I’m surprised that his “life to the full” definition doesn’t sound more, well, Christian. Keith adds that “living life to the full” is not a particularly Christian concept; he nods to how ancient Greek philosophers Aristotle and Plato thought and wrote a lot about it (as have plenty of others since).

But when I ask Keith about whether Christianity offers anything different about living life to the full, he quickly references how the gospel of John quotes Jesus revealing that he came so that people “may have life and have it to the full.” (John 10:10) Keith explains that that bold statement about where abundant life is found is a point of distinction from all other philosophies or worldviews.

“There was a certain kind of truth the Greek philosophers were pointing to – but I think that Jesus sharpens that truth. He’s saying that living life to the full involves relationship with the One who created the whole of creation and comes to us in Jesus.”

“What Jesus and the Bible say that is different is we, in ourselves and our own capacity, can’t achieve that [relationship]. We need someone from outside to come into the world to engage with us to enable us to do that.”

Living life to the full might seem light years away from someone who is struggling to make a home in Sydney. But as Keith and Parramatta Mission indicate, housing issues are not beyond the scope of God’s care and provision in Jesus. Rather, it requires intention and passion to sort out how following Jesus leads to an impact upon where we live and finding fulfilment wherever that is. As long as it’s built on the strongest foundation of all, Jesus Christ himself.