Home
Reviews
Hope in the Darkness

Hope in the Darkness 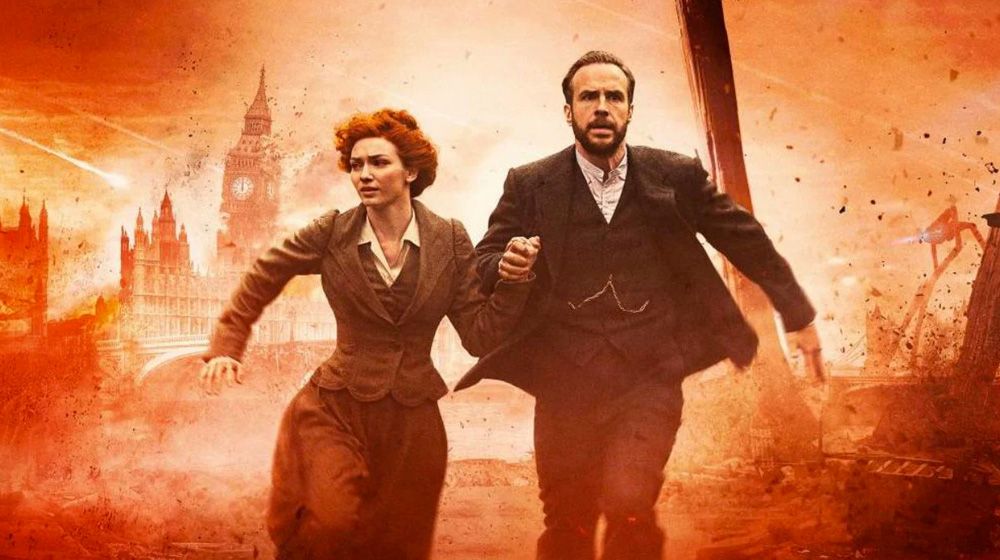 The latest retelling of HG Wells’ classic The War of the Worlds is a story set in darkness, for a world that’s found itself in same.

BBC One’s 2019 re-imagining doesn’t feature any huge Hollywood stars running away from towering monsters, nor is it a larger than life musical featuring narration by Richard Burton (or Liam Neeson, depending on your preference).

It’s a re-imagining that sees special effects take a back seat to the narrative. What it does bring with it is an opportunity to breathe life and depth into the characters as we follow them amidst the subjugation of humanity by the Martians.

Taking place in Woking, Edwardian England and headed by Eleanor Tomlinson, Rafe Spall, and Robert Carlyle; what we see is that it’s possible to tell this story from a slightly different perspective and still keep what’s critical. Amy (Tomlinson) and her partner George (a journalist, and both pariahs or social outcasts) befriend Ogilvy (Carlyle) who has been watching the supposedly volcanic eruptions from Mars.

One point where this is drastically different to previous versions is that we follow Amy instead of George, and this shift in perspective allows for a new lens on Wells’ classic. It’s a touch that is both welcome and well-written. The social issues surrounding a woman in Amy’s position aren’t bandied about in neon, but neither is Amy written to be the woman who will save humanity at all costs; she is British after-all, not an American.

If Amy’s character was to come from anywhere, I would be curious if she was a nod to pastor Nathaniel’s wife Beth from Jeff Wayne’s musical version. George, however is refreshing in the opposite sense: he’s shown to be afraid (but not cowardly) and vulnerable in the face of this other-worldly adversity.

It is worth noting that this version of The War of the Wolds has been compared to Doctor Who for its apparent pandering to issues of social justice (the biggest of these being that a woman is propelling the narrative). It would do disservice to the original work not to touch upon what this version is hinting at in its overall narrative of catastrophe. Wells wrote The War of the Worlds to give light to what imperialism would look like from the perspective of the Tasmanian First Peoples that were wiped out by British settlers:

And before we judge of them too harshly we must remember what ruthless and utter destruction our own species has wrought, not only upon animals, such as the vanished bison and the dodo, but upon its inferior races. The Tasmanians, in spite of their human likeness, were entirely swept out of existence in a war of extermination waged by European immigrants, in the space of fifty years. Are we such apostles of mercy as to complain if the Martians warred in the same spirit?

Less the Martians invading, than pointing to the rhetoric used by the far-right talking about asylum seekers causing untold destruction to the western (and supposedly much more civilised) way of life. Such is the power of science fiction, at least science fiction done well, the ability to find harmony with current events.

Beyond Tomlinson and Spall’s performances, Robert Carlyle’s portrayal of astronomer Ogilvy stands out. It wasn’t hard to see a synergy between Ogilvy and Carlyle’s Dr Nicholas Rush whom he portrayed in the killed-too-early Stargate Universe, in that he always seems to have a card close to his “well turned-out” chest.

It must be said that this is about as far from a Hollywood blockbuster as an adaptation of this particular piece of work is going to get. The pacing is much less frantic, but gives way to a tide of dread and despair. While the Martian war machines are distinctly alien, they are also unmistakably organic looking, seemingly formed from the red weed and crystals that give Wells’ fictional Mars its crimson hue.

War of the Worlds doesn’t offer any solutions for how to deal with the problems it’s highlighting beyond treating people with grace and mercy.

What it does offer is a vision of hope in the darkness.

War of the Worlds will stream on Foxtel in January. It will also launch on SBS in 2020.