From prison camp to gospel freedom

After ten years in Vietnamese communist re-education camps and more than two years living in a Thai refugee camp, the relief of freedom in 1992 was overwhelming for Rev. Bui Chi Ai. Little wonder he wept when he stepped off a plane on to Australian soil for the first time.

When Ai reflects on everything he endured, he says: “I really just want to ask Jesus, ‘Why do you love me so much?’”

Today, Ai is Minister of the Word at Cabramatta Uniting Church in one of Sydney’s most culturally diverse suburbs. He serves the community with a faithfulness to God borne out of his life’s journey.

Every day, Ai is thankful to be free to serve God and share his love with others.

As a young person growing up in Vietnam, Ai had no plans to become a minister — even though his father was a missionary with the Evangelical Church of Vietnam. As a minister’s son, Ai had little freedom and high expectations to meet.

In Ai’s final year of high school, his father became seriously ill. One night, Ai sat beside his father and wrestled with God.

“I was really angry. I said to God, ‘How can you treat your own servant like that?’ Then I realised I had never actually prayed for my father.”

“I was afraid and I didn’t want him to die. I said to God, ‘If you let my father live a few more years, I will commit myself to you.’”

Everyone was stunned when, the next day, his father began to return to health. He lived another 25 years.

Ai laughs as he reflects that “you never make a deal with God, because he is true to his promises.”

Never felt closer to God than in labour camp

True to his own word, Ai entered Bible College when he finished school. In 1972, he began his ministry as a hospital chaplain in Da Nang. When the Vietnam War ended in 1975, he was appointed as the minister at a large church in the Quang Ngai province.

At the same time, tensions were high with the new communist government which was highly suspicious of the church. Local police attended Ai’s services to monitor his sermons.

In 1978, Ai was accused of being a CIA spy. He was arrested, placed in solitary confinement for nine months, then transferred to Kim Son, a “re-education camp” deep in the jungle. He was one of thousands sent to camps as part of the government’s attempt to discipline and indoctrinate those considered political threats. Many did not survive their internment.

Ai laboured eight hours per day for three bowls of rice. In return for extra food, he and fellow inmates were called upon at night to accuse each other of laziness or wrongdoing. After the lights were turned out, Ai would pray and sing to God.

“I’ve never felt closer to God than at those times,” Ai reveals. “I felt like I could touch him. I remembered that even Jesus spent time in the desert. I was sure God was preparing something for me.” 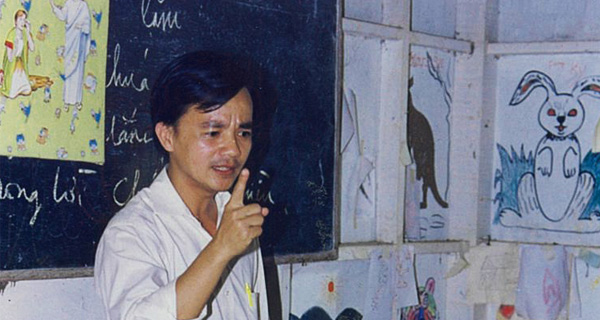 Three years after entering the camp, Ai was given a chance at freedom on the condition he write letters which said he had handed his church over to the government and no longer believed in God.

“I answered ‘Jesus has become the blood in my body. How can you take the blood from my body?’” This declaration of faith saw him moved to the infamous A20 labour camp at Xuan Phuoc.

Ai was finally released in October 1987 but remained under strict surveillance by the communist state. He wasn’t allowed to preach or go to church and he was forced to clean public toilets, along with other criminals.

“I felt I could not cope under these conditions,” recalls Ai. “I told my mum I have to go.”
With the help of friends and church members, he made his way to the Cambodian border and travelled to Thailand by boat.

Making his way to a refugee camp, Ai had to undergo a long screening process. Two years on, a chance meeting with former Australian Immigration Minister Gerry Hand changed his life forever.

The Minister had flown to Thailand to see the camp first-hand. Because of his English skills, Ai was asked to show Mr Hand around the camp.

“I had no idea what the Immigration Minister meant but I showed him around and he asked me why I had escaped,” Ai explains. “I told him about my story.”

“Then he asked me, ‘Would you like to come to Australia?’ I said ‘Yes’ without thinking. Then he turned to a member of staff and told him to write down my name.”

Living out the hope of Easter

Shortly after this, Australian Immigration officials came to the camp to interview potential refugees for resettlement. Much to his surprise, Ai was the first person called into the office.

Four weeks later, Ai arrived in Australia with nothing but the clothes on his back and his Bible. He was met by members of the Baptist Church in South Australia. For the first time in 14 years, he was free to enter a church.

It happened to be Easter.

“I was just crying. I felt ashamed and embarrassed, but I couldn’t stop. I knew that now I was free to serve God.”

“It really was an Easter Day for me.” In 2000, Rev. Bui Chi Ai began his ministry in Cabramatta, renowned for its large South-East Asian population. About 88 per cent of Cabramatta’s population speaks a language other than English at home — the highest number for any suburb in Australia.

“When I first came to Cabramatta, it was not easy,” recalls Ai. “Some people were saying, ‘Oh no, another Asian minister’. But I knew it was my calling to proclaim the Good News and I asked God to help me lead the way I should.”

Ai has nurtured and grown the Congregation and earned the respect and trust of community members from all cultural backgrounds.

As well as a thriving Vietnamese ministry, his English-speaking Congregation includes members of Chinese, Cambodian and Anglo backgrounds. Ai holds regular combined services where he preaches in Vietnamese and a recorded English version is played through headpieces.

The Congregation runs English classes and reaches out to the wider community in other ways, such as a providing free lunch for seniors each week.

One of the elder English-speaking members of the Cabramatta Congregation recently celebrated her 90th birthday. The whole church came together to celebrate.

“We’re in the 21st Century,” says Ai. “People do not come to church for a sermon. They can go to the internet and get all sorts of sermons.

“Today, fellowship is more important. It’s not just a relationship with God but with one another as well.”