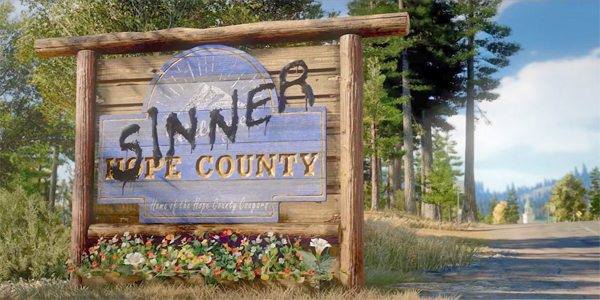 Beginning as a fairly random videogame involving killing mutants in a tropical island paradise, the Far Cry franchise since changed into a Heart of Darkness-esque journey into far flung locations, exploring the inhumanity of colonialism and the dark side of the human psyche. While the games’ locations have previously included a fictional pacific island (Far Cry 3) and a Himalayan nation (Far Cry 4), Ubisoft has instead set the fifth game in Middle America, making a fundamentalist Christian cult the new faces of evil.

While videogames are often thought of as being an escapist form of entertainment, some recent titles have engaged with political themes. From what Far Cry’s creators have said about the title, it seems that they want people to think about the destructive potential of political and religious extremism.

A lot of the early marketing surrounding Far Cry 5 has centred on the new big bad Father Joseph Seed, a charismatic cult leader who blasphemously has his own  new book added to the Bible. In a similar way to Bioshock: Infinite’s ‘prophet’ Zachery Commstock, Seed preaches a gospel of separatism from the wider world.

With early promotional art recreating Da Vinci’s Last Supper, it was clear from the beginning that Ubisoft want players to think of religious themes.

Join us for a last supper… #FarCry5 pic.twitter.com/QgnjPN5YBS

One of the Far Cry 5’s most interesting story arcs is a clash between competing understandings of Christianity. This is perhaps most realised in the character of Pastor Jerome, who has lost his congregation to Seed’s twisted promises. In the game’s violent world, finds himself pulled towards seeking revenge.

A game with a cult following

Seed repeatedly warns his followers “They’re coming for your guns, they’re coming for your faith, they’re coming to disrupt your natural way of life.”  The character has a certain genuineness that adds to the horror. Seed and his movement clearly represent the potential for faith to be twisted and the scary reality of cults. This was something that was emphasised during the game’s development, when Ubisoft consulted with cult experts.

In an interview on Waypoint, cult expert Mia Donovan said that “mass movements” like cults required an enemy for their members to define themselves against. For cult members to get on board “there doesn’t necessarily need to be a god, but there needs to be an enemy.”

In the Waypoint interview, Far Cry 5 director Dan Hay said that he hoped the game would make players think through the issues presented.

“Are games at the point where they’re mature enough to be able to, at the very least, scratch at some of this stuff? To explore it? I think they are,” he said.

According to Hay, the game’s story is “not just about America.”

“It’s about the state of the world right now, where everything feels like it’s a little bit closer to the edge than it should be. And that maybe we need to take a step back. Maybe there’s a moment where we need to think.”

Insights had the opportunity to play a brief Far Cry 5 demo. We will post a review once we have a chance to play the final version.