Home
Features
Disability and the body of Christ

Disability and the body of Christ

Seeing a family member with a disability being excluded from church has inspired 17 years of writing and thinking about disability for Dr Louise Gosbell.

Like many people, I had never stopped to think about the challenges experienced by people with disability in the church. I didn’t really think about the difficulty faced by church members in wheelchairs or walking frames attempting to enter heritage-listed buildings with steep stairs and no ramp. I didn’t think about the distress that could be caused by the absence of accessible parking or accessible toilets for some church members with disability. I didn’t think about the concerns of parents of children with autism and whether their child would be accepted by their peers and included in kids’ church. These things were simply not on my radar until disability suddenly became personal.

By the time I married my husband Mark, his brother John was 14 years old. Through my relationship with John and my parents-in-law, I became more aware of the barriers that prevent people with disability being included in society. But while I grew in my general understanding of disability, I did not give any consideration at all to disability in the context of the church. This changed when a new minister began at the church John and my parents-in-law were attending. While John had been involved for many years with welcoming, as well as making other contributions to Sunday services, when a new minister began at the family’s church, he immediately put a stop to all John’s serving roles. The belief of the minister was that someone with an intellectual disability doesn’t have the capacity to understand the gospel and therefore shouldn’t be allowed to be in any up-front position in the church. While my immediate response was one of shock, I realised that I had never really considered disability from a theological perspective before. Suddenly, I had questions I wanted answered. Was the minister justified in his decision? And is there anything in the Bible on how we should treat the people with disability in our midst?

After this incident with John, I quickly became incredibly passionate about working towards the full inclusion of people with disability into church communities. I met with people with disability and their families and carers. I heard stories of church communities with all members being valued and included irrespective of physical or intellectual ability or disability. I also heard stories from families who were asked to leave their children with disability at home on Sundays, because their child was considered too disruptive by the congregation. What heard – and still hear regularly – from ministers and church members is that people with disability make up only a small percentage of the community. So because of this, it is simply not economical to make changes to the physical access of the church for such a small number of people. 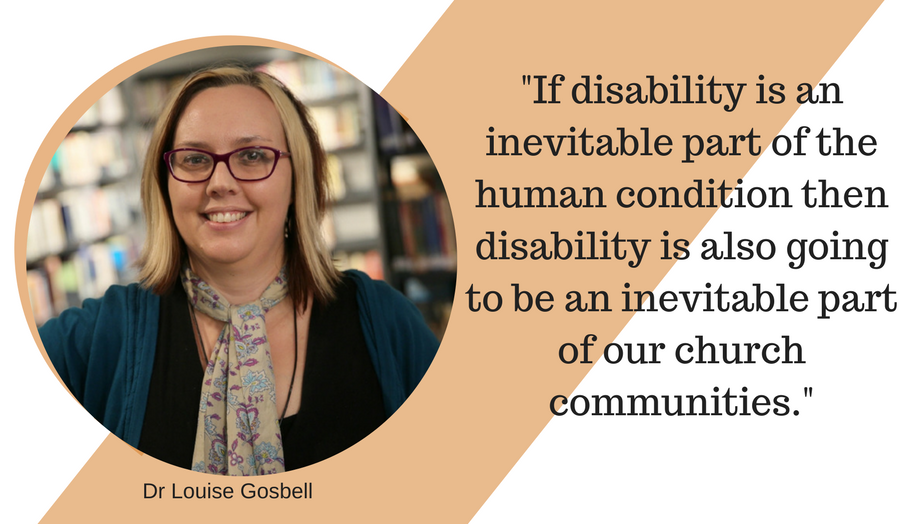 But there are some flaws in this argument. Firstly, the World Health Organisation estimate that approximately 15% of the world’s population live with disability. Not only this, but research shows that statistically every person on the planet will pass through some period of their life with disability. For some people, that disability might be a permanent condition that is apparent from birth. For others, their disability might be acquired as a result of an illness or ageing. But whether that disability is permanent or temporary, evidence indicates that the average person in the western world will spend between eight and 20 years of their life with some form of disability. If disability is an inevitable part of the human condition then disability is also going to be an inevitable part of our church communities.

In his first letter to the church in Corinth, the Apostle Paul says that just as in a human body there are different members of the church have different functions. Paul says that while there is enormous diversity among the members of this body too, all members are called to live in unity and are to be given opportunities to use their unique spiritual gifts in service to the body.

Often Paul’s descriptions of individual spiritual gifts are interpreted in terms of a person’s natural or learned abilities. However, Paul is not talking about natural talents but about the spiritual gifts allocated to one and all in the body of Christ by the Spirit. While sometimes these spiritual gifts might overlap with a person’s natural or learned abilities, we cannot be certain that this is always going to be the case. For example, someone who is a good public speaker might also have the spiritual gift of teaching. This means it is impossible for us to discern a person’s spiritual gifts based on their physical or intellectual capacity. The reality is that it is the Spirit who distributes gifts to every member of the body and does so for the common good of the body. How then can any member of the body declare the uselessness or limitations of the gifts God has imparted on another member? Indeed, Paul addresses this very topic in 1 Corinthians:

Every member is given spiritual gifts by the spirit and the capacity to be able to use those gifts to serve the body even when those gifts are not immediately apparent to the other members. In fact, Paul says that those members whom we consider “weaker” – whether because of disability, age, socio-economic status or anything else – are actually “indispensable” for the effective functioning of the body of Christ!

Earlier in the same passage, Paul says that each one of these spiritual gifts is given as “a manifestation of the spirit.” However, the word “manifestation” here could easily be translated “revelation” – the gifts of the spirit thus serve to reveal the Spirit to each and every one of the members of the body. This idea of “revealing” the spirit emphasises that through the exercising of spiritual gifts, each member of the body has the capacity to demonstrate, indeed, reveal, something of God’s spirit to one another. Whatever a person’s physical or intellectual capacity, every member of the body has been allocated their own spiritual gifts, which they are to utilise in order to reveal the Spirit for the edification of the whole body. Paul is concerned that the members of the Corinthian church are labelling some of the other members “weaker” than others. This is because they do not possess some of the apparently more prestigious spiritual gifts such as that of prophecy or teaching. But whether these members are considered “weaker” because of physical weakness, social powerlessness or because of an apparent lack of wisdom (in relation to the Corinthians’ warped ideas of what spiritual wisdom actually looked like), Paul cautions the Corinthian church against such judgements by saying that:

“…those parts of the body that seem to be weaker are indispensable,” (1 Corinthians 12:22).

In the fullness of the resurrection

Throughout his letters to the Corinthian church, Paul talks a great deal about weakness. In one sense, Paul talks about weakness as an inevitable part of the human experience and our participation in a fallen world. We all experience limitations in our body, the things we wish our bodies could do but cannot. We all experience the effects of ageing and we will all experience the ultimate sign of the fall and human limitation: a physical death. It is only in the fullness of the resurrection will this weakness be cast off: then our bodies that are “sown in weakness, (will be) raised in power” (1 Corinthians 15: 43). This is weakness we all jointly participate in despite appearances that some might be stronger or smarter than others. In this sense, while we all have various abilities and disabilities that make us different, our shared experience of human limitation is what makes us all the same.

Paul also talks about weakness in 1 Corinthians 12 as that which only appears to be weakness. The Corinthians are judging one another based on a range of different categories of who was wiser, who possessed the greater gifts, who had greater social power. However Paul says the categories that the Corinthians were using to judge one another were completely flawed because this was merely the appearance of weakness. Paul challenges us that we simply cannot judge one another based on outward appearance or physical or intellectual capacity because this is simply not the way God has put the body of Christ together.

As we reflect on the message of Christmas, we are reminded that Jesus Himself came bearing all the signs of human weakness. He came in the form of a vulnerable baby, wholly reliant on others for nurture and care. He experienced the limitations of the human body and was as susceptible as any of us to hunger, tiredness and sorrow. Not only this, but while Jesus’ followers anticipated a Messiah who would lead a rebellion and fight against their Roman oppressors, Jesus did something wholly unexpected. He died in the shameful way of the cross. The message of Jesus’ life and death might have all the appearance of weakness and foolishness. But this was actually the ultimate demonstration of God’s power at work as it was the means through which we are offered salvation.

While it is easy to judge others based on worldly classifications of power and weakness, ability and disability, the message of Jesus is one of God demonstrating His power in the most unexpected way. Given that this is the upside-down message of the gospel, should not the body of Christ respond accordingly? Rather than marginalising and excluding those people deemed weak and powerless by our society, Paul says these are people who are indispensable to the body of Christ.

Dr. Louise Gosbell is a Senior Research Fellow at Anglican Deaconess Ministries in Sydney and a lecturer at Mary Andrews College. Louise is also an adjunct lecturer at Alphacrucis College and Charles Sturt University.

PrevPreviousGetting back to the Shack
NextNo barriers for this marathon wheelerNext