Church and students strike for climate 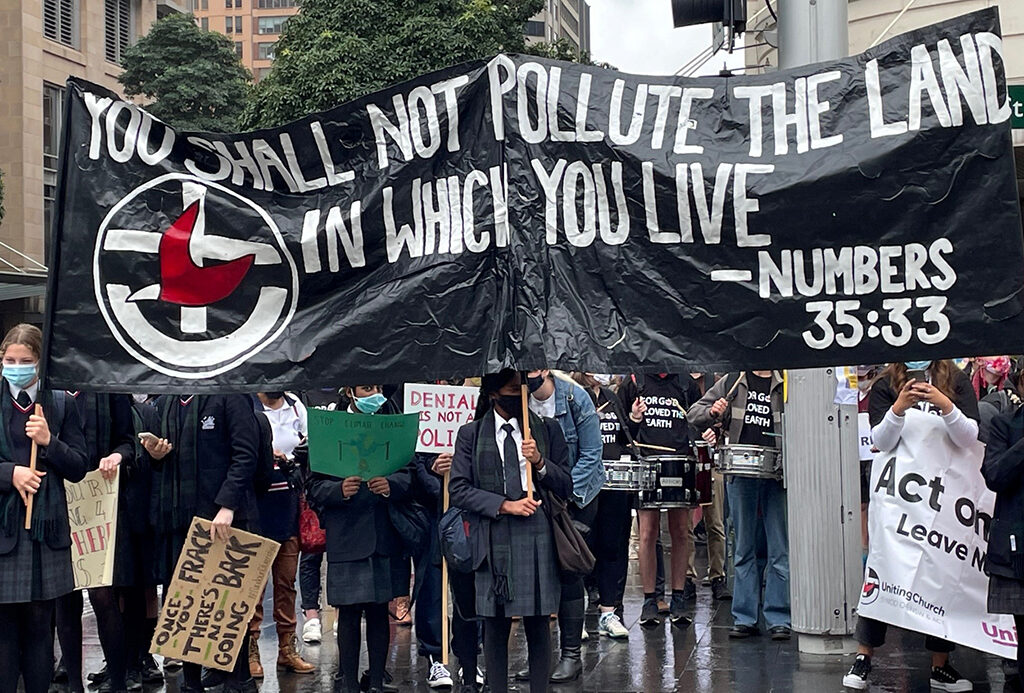 Rallies took place across all major cities today (21 May), as students once again went on strike, dispite the inclement whether, to call on the federal government to take action on climate change.

According to School Strike 4 Climate Australia (SS4C), there were 50 registered events nationwide.

In Sydney, Pitt Street Uniting Church hosted a pre-rally worship service from 10am.

In keeping with the event theme of youth leadership, Uniting Church young people were heavily involved.

Uniting Church school students were given permission to attend. They lit the Christ candle, delivered the welcome to country, and delivered prayers.

Matthew Powell from Christian Students Uniting and Milise [Ofa] Foiakau, Pulse field officer delivered the sermon. Ofa spoke about the affects of the climate crisis on her home in Fiji.

“Thank you to all of you, who have organised this service, reminding us of God’s call to us to participate in the healing and renewal of the whole of creation,” Dr Palmer said.

“Thank you to Christian Students Uniting and all students here for your and your prophetic teaching in naming the Climate Crisis and the urgency of taking action now. Our crying out for justice as we see creation groaning is an expression of our common that is an expression of our common concern for the whole earth. Our marching is part of the Holy Spirit moving across the earth and a global movement of many voices calling for climate action.”

Members of the service then marched to the rally at Town Hall. There the rally was led by students and a number of speakers included First Peoples’ such as Ian Brown, a member of Gamilaraay Next Generation (GNG) who has lead a rally against the governments consultation on the Santos gas project in November 2020, a $3.6 billion project headed by Australian energy giant Santos, that will see up to 850 coal seam gas wells being drilled into 1,000 hectares of Gamilaraay Land. The project will cause significant damage to the Pilliga Forest, which contains hundreds of sacred sites and many threatened species. It will pollute many of the freshwater sources in the area, including the largest freshwater aquifer in the world.

“It’s good to see students, First Peoples, our migrant brothers and sisters and our indigenous communities throughout the world to take a stand against the people who sit in power throughout this planet,” said Mr Brown of the thousands of people gathered for the rally.

“There is no planet B. We’ve got to step up and take a stand. the land doesn’t belong to us, we belong to it. It is our mother, our carer and our provider. We are striking for climate, to stand with sovereign land and water protectors.”

With the United Nations’ Climate Summit set to take place in Glasgow from 1-12 November, there has been pressure on Australia to adopt more ambitious cuts to carbon emissions. While Prime Minister Scott Morrison says the country is “doing its bit”, US President Joe Biden has pledged that his country will halve emissions by 2030 and called on other nations to do likewise.

The rally marks the third year in a row that the Uniting Church has been involved in the rally. When the NSW and ACT Synod endorsed the School Strike for Climate in 2019, it became the first Australian institution to do so.

PrevPreviousPentecost, the Spirit, and the people of God
NextSeeing and discussing mental healthNext