Home
Features
Can we be nice to each other online

Can we be nice to each other online

This Christmas we want to reflect on how our relationships and stories can give us hope for a better way to live with each other, inside the promise of the unconditional love and grace God has for us.

Insights sat down with with Fr. Shenouda Mansour, General Secretary of the NSW Ecumnenical Council, Rev Margaret Mayman, minister at Pitt Street Uniting Church, Stewart Mills, member of the NSW Relations With Other Faiths Committee and Lina Jebeile, a former teacher and food blogger who is currently running a campaign #SpreadHummusNotHate.

In this second part of a three-part special, we discussed the impact of media upon our lives and whether it is possible to cut through the negativity, abuse and prejudice.

How does social media and traditional media amplify fear of the ‘other’ and how can we speak into this space – which should be about community – more effectively?

Fr. Shenouda Mansour: We have to be positive. Life is about being positive, life is being gracious, life is about loving our neighbour. It’s about sharing and being merciful. It’s not about hate speech. How can another person hate another person and even kill another person? I find that very difficult. I can’t comprehend what is happening in the Middle East and around the world. At the end of the day, we are all God’s children. Love and respect goes beyond the word ‘tolerance’.

Lina Jebeile: That’s right, I really don’t like that word – tolerance. If someone says ‘I’ll tolerate you,’ it’s like they have to. Like they are [being] forced to.

“We need to challenge racist ideas and one way is to personalise it.” – Stewart Mills

Stewart Mills: On the question of social media, there is also a challenge as well. We have gone through different periods of acceptance. When I was at school there was a lot of anti-Asian sentiment in Australia. My mother is Chinese and I was in a country university at the time and once you personalise it, it stops people, because often it’s not rational. We need to challenge racist ideas and one way is to personalise it.

MM: I also think that social media can be useful. At the moment [this round table was held two days after Trump was elected President], ‘the morning after’ in the US, there are a lot of people who are sharing the anxiety of Muslim people in particular and women about what’s happening. It’s a way of letting people know that this decision is affecting real people’s lives. I think also with One Nation in Australia, it is affecting real people’s lives. The fear is real and in saying love drives out fear, we shouldn’t rush to an easy unity. We need to acknowledge that there is real pain and there is danger. 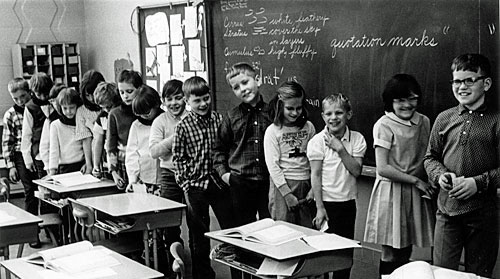 FS: Remember the program “Blue Eyes/Brown Eyes” [pictured above]? It would be interesting to do this now and the participants experience would be the same as in the program. This was a pilot program [by school teacher Jane Elliott in the US] and we’ve forgotten what it is like to be marginalised. In Australia there are lots of people who are marginalised. We need to educate young people. Education is the most powerful tool that we have available to us, in order to bring the wonderful diversity we have into action. We should be able to live together peacefully with kindness and love and be generous to one another.

LJ: I love Jane Elliott’s theory [“Blue Eyes/Brown Eyes” experiment]. We often talk about multiculturalism being this “melting pot” and Ms Elliott says no, this is a completely wrong way of looking at society; let’s be a salad bowl, where you put all these different ingredients into this one bowl and all the elements keep their texture and their flavour and together you have this fantastic mix of flavours. I love the salad bowl analogy. That’s really confronting, that experiment.

When Pauline Hanson gave her speech in parliament after the election, I remembered Jane Elliott’s experiment and I thought, ‘Should I show this to my children?’ I wasn’t sure if they were too young to watch it or if they wouldn’t understand it. I am so glad I let them watch it because it really opened a conversation, and they started speaking about the fact that this sort of racism is happening to us — but it’s not OK to do it to someone else.

LJ: There’s the good and bad and social media and you can’t ignore it.

MM: It’s a reality of our lives.

LJ: There’s this really ugly, hateful side of social media…

LJ: But do you know what’s scarier, it’s not really faceless anymore. I actually deleted my Facebook app off my phone because recently there was an article on the Sydney Morning Herald and another which was more recent on the Australian Women’s Weekly website and you can’t help but click on the comments. When I read them sometimes I wonder: are they just [written by an] anonymous troll? And then I click on them and there is a real name and place of employment. They have photos of themselves and photos of their children. I think that what’s scariest of all is not what you’re saying, but what are you teaching your children?

“We need to be teaching the aspects of love and respect and that we are all human beings.” – Father Shenouda Mansour

MM: I think the problem with One Nation and now the election of Donald Trump is the permission given and amplifying those voices and people thinking this is acceptable behaviour. We need to teach people about solidarity – and how to respond to people who are like this in public. And we have to take responsibility. [But] there have been some good situations on Sydney public transport, and I wear this safety pin [now] because I read that after Brexit there was a lot of hostility on public transport — and people started wearing the safety pin, to display that they were somebody who people could look to for support.

FS: [But] All women should feel safe. For Trump to say what he did, sends us back to the dark ages. This is not the message we should be expressing. We need to start educating from kindergarten that this type of thing is unacceptable. We need to be teaching the aspects of love and respect and that we are all human beings. Regardless of what colour you are, we are all human beings.

MM: We should be sickened about what is happening to asylum seekers. We look back at the past and say, ‘How could this have happened?’ And yet we have this going on, currently.

SM: You hear talk about the last person in shutting the door, so there’s this notion that once you’re in and safe in Australia, we don’t want anyone else. I guess this is the challenge — how do we open our hearts?

PrevPreviousFighting fear with love in action
NextBuilding bridges of understandingNext