Home
Reviews
Can there be more to add to the legend of Sherlock Holmes?

Can there be more to add to the legend of Sherlock Holmes? 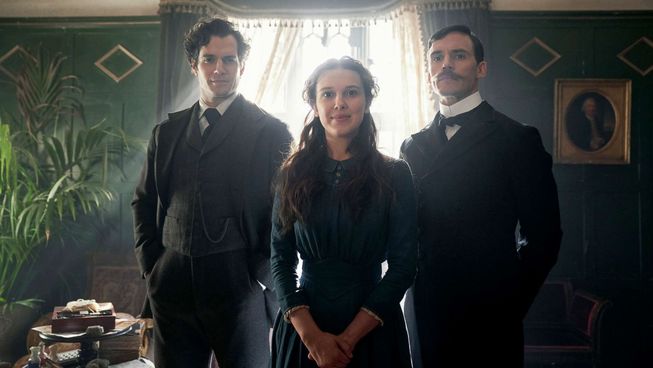 Every author must have some underlying hope that their characters will resonate with people around the world. Much less, for them to become legendary and continue to speak into generations of readers and even influence other authors. Sir Arthur Conan Doyle was famous in his time, but his books and specifically his character, Sherlock Holmes, has become synonymous with mystery and detective stories. The latest nod to the mythical sleuth is a book series by Nancy Springer who introduces the younger sister to Sherlock (Henry Cavill) and his eldest brother, Mycroft (Sam Claflin). The young girl who goes by the name of Enola (Millie Bobby Brown).

Raised by their mother in the Holmes estate, the youngest sibling is afforded a homeschooled education, martial arts training and is encouraged to develop a mind of her own. Enola does maintain the qualities of her famous brother while developing other key attributes that guide her through life. Skills and abilities that tend to defy the social norms of her time. Their mother, Eudoria (Helena Bonham Carter), had made it her intent to train her daughter to be intelligent, well-read, to love word games and to be willing to defend herself and others. The mother and daughter are inseparable until Enola’s sixteenth birthday. On this fateful day, Eudoria simply disappears without a word and only leaves a birthday gift behind.

It is due to this occurrence that her older siblings come to see what they can do with their sister and the estate that has been abandoned by their mother. Mycroft has been the manager of the Holmes estate since their father passed away. The older brother is aghast at the state of his sister and the family home. While Sherlock has gone on to become one of England’s foremost detectives and managed to establish celebrity status in the meantime. The two brothers decide to send Enola to a finishing school for girls and then work to find the location of their estranged mother, except their sister has other plans. After finding some well-placed clues left by her mother, she decides to head off to London to find her beloved parent and maybe have a bit of an adventure along the way.

To think that anyone could have more to add to the mythology of Sherlock Holmes, since he has dominated books, film and television over the past century. Yet, Nancy Springer has managed to introduce an invigorating and youthful addition to Doyle’s literary creation. Long-time fans will be pleased with how the screenplay stays close to the original tale of deductive reasoning and adds a creative twist on the familiar narrative. Allowing Enola to be a welcomed addition that is worth watching and she will leave audiences wanting more.

The key to this whole project working is the actress who brings this intriguing figure to life and Millie Bobby Brown proves to be a perfect choice. She manages to embody the idiosyncratic virtues that are needed to carry this young lady through to the end of the tale. Then to include the supporting cast of Cavill, Claflin and Bonham-Carter makes this a mysterious exploit worth jumping into and holding on until the end. Even though this alliteration of Sherlock does portray him as more aloof and human, it does not diminish his connection to the story and his family. Claflin seems to relish the opportunity to represent the harsh older sibling while Cavill is left to be the brooding, but always aware detective who takes some time to enjoy.

What makes this screenplay work is the storytelling, pacing and the continual breaking of the fourth wall. From the opening scene until the conclusion, the pace is rapid-fire and forces the viewer to pay attention or risk missing key clues. This method of filmmaking provides the needed audience participation and makes up for some of the less than believable elements that are introduced. In the end, the game is afoot and this proves to be a wonderfully imaginative and endearing inclusion into the world of Sherlock Holmes and it will leave people asking for more of the young female detective named Enola.

What should parents know about Enola Holmes?

Similar to the messages of many modern films, there are individualistic and humanistic underpinnings to this re-imagined history of this story. The ‘on-the-nose’ tone of following your dreams is woven into the fabric of the story. Yet, it does not detract from the overall viewing experience, but what it should encourage is the involvement of parents. This is a great opportunity to sit down with your child and talk about this film and the messages it is trying to serve up. That is where the value of this entertaining and engaging adventure lies, to engage the mind and start the conversation.

REEL DIALOGUE: Are we really alone on this journey called life?

Since her name seems to imply that she would be alone, it only makes sense that we could consider what it means to be alone. In our social media society it can be easy to feel isolated in a crowd or even get nervous when we cannot connect with others. Isolation can be a physical reality, but for many it is truly a state of mind. We can seek out solace in personal relationships or through technology, but these things do eventually have limited satisfaction.

This deeply philosophical query can be answered by saying that God is there for us at all times. The answer for mankind is to merely turn around and acknowledge His presence. During times of joy or loneliness, God is there for us and provides a relationship unlike any other.

Where do you start? Begin with the first book of the New Testament – Matthew 28:20 –  ‘behold, I am with you always, to the end of the age’ and then go back to the beginning of the story and introduce yourself to the person of Jesus. Matthew