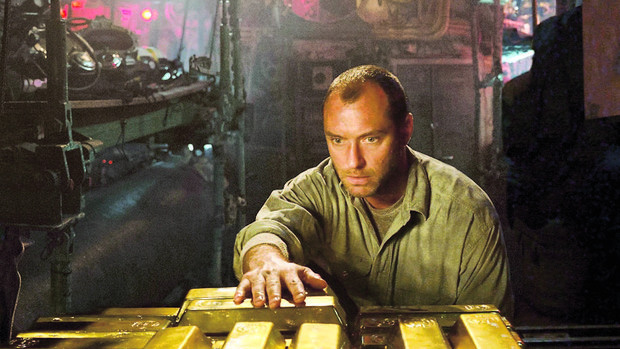 Bringing together a motley crew of disgruntled and desperate men. Tempting them with the potential of retrieving millions of pounds of gold from the bottom of the Black Sea. Putting them inside an old Russian submarine…. What could possibly go wrong?

Captain Robinson’s (Jude Law) life seems to be cursed. The proposition put to him — to lead a crew to salvage Russian gold from a sunken Nazi submarine — seems to give him a much needed life line. But within minutes of agreeing to the mission, a dark cloud of disaster floats into his life again. Robinson does have the naval credentials to lead this effort, as well as the mysterious crew of sailors. But he soon proves to lack judgement when it comes to this mixture of men.

Among his many bad decisions, he promises this gang of misfits an equal share of the gold. They do not have to do advanced maths to realise that the fewer men aboard means more gold for each of the surviving crewmen. The lives of the men on this mission begins to sink deeper with each nautical mile that is travelled in the rusty submarine. Men die, but then someone has to be there to navigate this submarine through treacherous waters.

Kevin MacDonald (The Last King of Scotland) directs this sea tale to the boiling point and keeps the tensions high during the cursed journey. He manages to keep a glimmer of hope within the walls of the rusty vessel, to maintain the attention of the audience to the end.

Black Sea is a fascinating study of the human spirit and how men respond to claustrophobic, caustic and tenuous conditions. The crew of this bedevilled submarine help to show the importance of how a ship must be a cohesive unit to function well. They prove the opposite in the end, due to their dysfunctional manner that causes disunity within the heart of crew. Disunity leads to potential disastrous conditions and once the cracks in the team appear, there is no repairing the damage.

Each cast member does an admirable job of fulfilling their roles, by staying true to their character and manifesting the divisive natures that exist within them all. Even with their many imperfections, they do represent the fighter in all of us and help the story to have a glimmer of hope for their success.

The stark atmosphere of the Russian submarine is used effectively as the additional character in this film. MacDonald manages to use the close quarters of the submarine to add to the intensity that propels the story ahead at full throttle. Many of the situations stretch the believability of this nautical narrative, but the hope for the sailors to prevail makes the plot holes forgivable. It is a dark tale that goes uncomfortably close to the reality of the human condition, but brings forward robust conversation points that assist with making Black Sea a worthwhile experience.

The characters are simple men who are put into extraordinary situations. They wrestle with many aspects of the good and bad within the human heart. Greed, selfishness, mistrust, pride and desperation are represented in most, if not all, of the characters. No one is able to rise above the frailties that plague mankind. Their sheer determination and self will cannot win out against the harsh realities of the world that surrounds them. Their hope is in the freedom that they could gain from the potential wealth of the sunken gold, and how it could release them from their desperate lives. But what they come to realise is that the gold weighs them down and leads them to disaster (as opposed to euphoria).

This direction points to the fact that we cannot take our wealth with us at the end of our lifetime. Such a revelation begs the questions: what are we truly living for, in this lifetime? After leaving Black Sea, discussions about life’s motivation and salvation are inevitable. This is not the feel-good movie of the year, but it has the potential to dive into a multitude of the bigger considerations of life and make it worth the cinematic ride.

Black Sea was an emotional rush. It hit at the heart of the male psyche and exposes the dark side of the human heart. Dark, brooding and a bit depressing, but a fascinating character play, as well as an opportunity for deeper thoughts of the life we have been given.