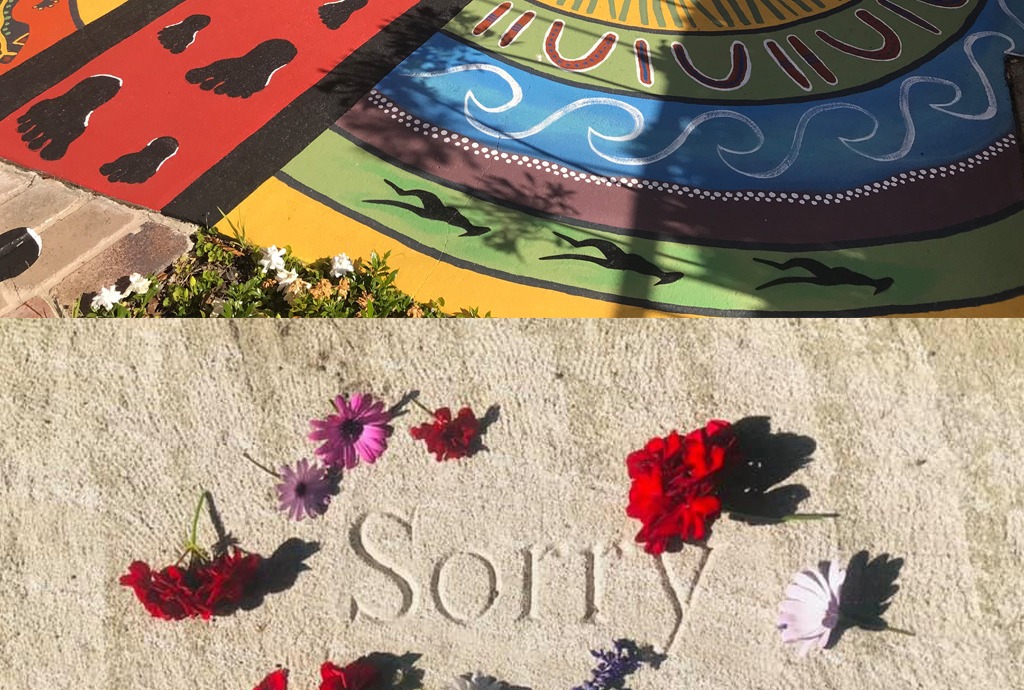 On Sunday 29 January, Adamstown Uniting Church is holding a dedication service for the church’s new mural and Sorry Garden.

The dedication service will include a smoking ceremony and acknowledgment of country. It will feature indigenous guests from the community and Awabakal leaders, as well as stories from people involved with the Sorry Garden project.

Indigenous artist Maree Bisby designed and coordinated the mural to promote reconciliation. The mural is called Come Together.

“It’s been my absolute honour and privilege to do so,” Ms Bisby said.

“What I’ve put together…is something that is very near and dear to my heart.”

According to Ms Bisby, the mural’s elements celebrate uniqueness and people’s own unique journeys.

“I have made the footprints a bold statement,” she said.

“I wanted the background to represent one meeting place encompassing the symbols of Nature, Waves, Rain, Men, Women and Children.”

“I have also included the traditional symbol for a woven basket and fishing trap to symbolise the strength of relationship between Mankind and Nature, relying on the stability of the Craftsmanship taken to create a vessel for carrying precious cargo along with the provision of nutrition, highlighting the beauty of the life cycle and the sense of Community one may feel, when surrounded by Nature, creativity and food.”

The mural leads to Adamstown Uniting Church’s Sorry Garden, a prior project that the church initiated to acknowledge victims and survivors of abuse, LGBT people, and Indigenous people.

“I was talking to the Synod about some sort of memorial for those whose families had experienced abuse,” Ms March recalled.

Ms March pointed out that 29 January was chosen for the dedication service, as it is the closest Sunday to Australia Day.

She added that the mural and Sorry Garden were the result of months of work.

“It’s the process of building relationships and finding out who the correct people are so that it’s a meaningful experience for the local community, so they can feel a sense of ownership of the space,” she said.

“It’s taken  a while. We’ve done it slowly and gently.”

“Maree lives in the same complex as me. We’ve also made contact with elders through local council.”

“It’s learning where the lines of communication are but mostly relationship building.”

According to Ms March, the congregation was “very proud” of the new mural and sorry space and, “convicted that it’s something that should be done.”

“Someone had an idea and everyone got behind it,” she said.

“It’s given people who really care about these issues…a very public statement that they’re behind.”

The dedication service for the Come Together mural takes place at Adamstown Uniting Church on Sunday, 29 January at 9:30am. The service will also be livestreamed here.

PrevPreviousWhat is Outsider Art?
NextFebruary: Being Salt and Light Next