A worthwhile journey through the city of the future 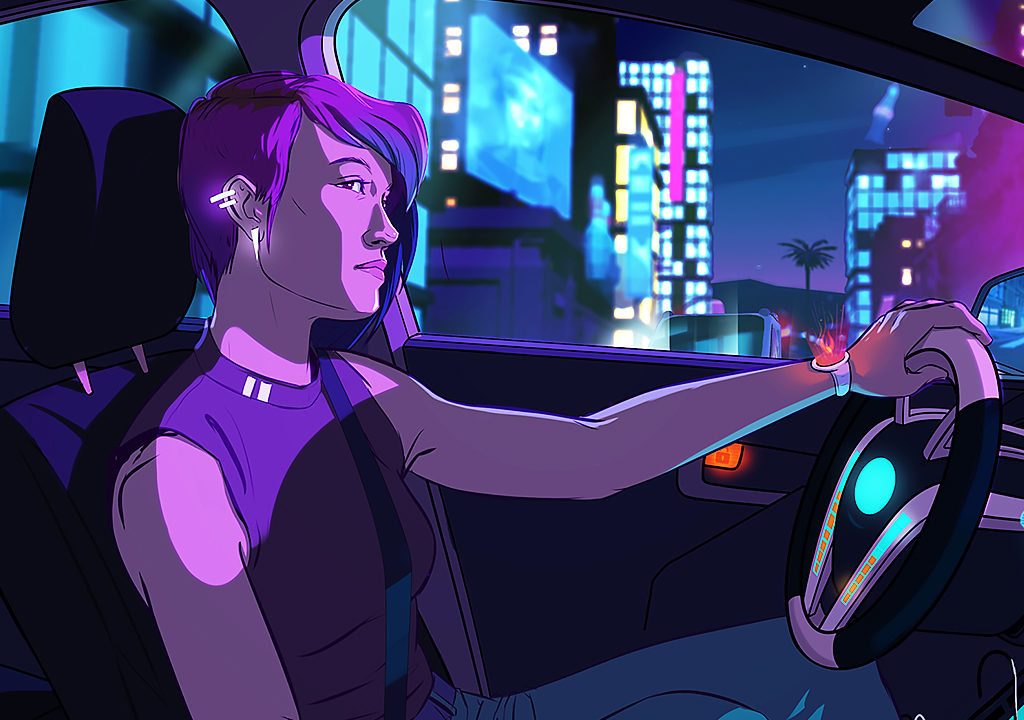 Set in the not-too-distant future, Neo Cab is a visual novel/role-playing game where characters take the protagonist through a city where Uber-Esque companies rule and the gig economy has become entrenched. Cars are frowned upon, and automation has taken hold, making the way that public places are used a matter of contention between a few corporate interests.

Players meet Lina as she’s en route to Los Ojos to start a new life with Savy, an old friend who she has grown apart from. It quickly becomes apparent that Savy is as flaky as ever, and Lina must make her way on her own, using her Neo Cab to make enough money to get by in an expensive city where operating a taxi is a legal grey area.

Neo Cab does not give players much by way of gameplay options. The title’s ‘gameplay’ lies in choosing which passengers to pick up, and what to say to them from a list of given options. Although this will not appeal to people who are not into the ‘walking simulator’ encompassed by the likes of Gone Home and Firewatch, players who enjoy their games with generous helpings of story will find that Neo Cab resonates.

As Lina continues to pick up passengers, a darker story involving a shadowy corporation called Capra unfolds, and players guide their way through a branching narrative by making different dialogue choices. What at first seems like a more personal storyline about two friends quickly veers off into unexpected territory, with glimpses of quantum theory, explorations of what makes for ethical action in the face of unjust laws, and notions of what it means to be complicit. The game surprised Insights with the way that the story blurs the fourth wall, with a meta-story about multiple realities and choices that are made for the character, who is almost aware that someone else is pulling the strings.

All of this is delivered by bright and colourful, almost cartoony imagery. To find another game to compare Neo Cab to is difficult, although Telltale’s The Wolf Among Us may be perhaps the best visual comparison. Los Ojos is like many cities, a multifarious place that can be interpreted in different ways. While the bright lights and the neon colour is welcoming at first, especially for bright-eyed newcomers, the city is a place where lots of different groups are struggling and competing for their livelihood, against corporations that don’t care about them. With many people unable to afford corporatised medical care, freelance amateur doctors make house calls, treating ‘patients’ with techniques they learned online.

The game has interesting things to say, then, about the kind of ‘world-saving’ rhetoric that emerges from big tech, in a similar vein to Evgeny Morozov’s Big Data, Small Government. Tech companies, Morozov argues, manage to convince people that they care about us through ‘life-changing’ apps, all the while avoiding paying taxes and providing governments with a potential justification for withdrawing services, having placed the emphasis on individual action. To use an example from Morozov’s work, apps can tell us how many calories we have eaten, but this is not so helpful if the only affordable food available is junk.

While Neo Cab is a game that explores big ideas, it is not perfect. The major downside to the branching storyline is the way that the game locks in key pieces of dialogue. Despite presenting the player with several options for what to ‘say’ next, there are sections where the game forces players to choose one particular option while giving reasons as to why the player character would not say what the player has chosen. This is an occasionally frustrating feature for a game where the player’s interaction with the dialogue is the main gameplay.

Despite some bumps in the road, Neo Cab provides plenty to enjoy along the way. With multiple endings and genuine storyline surprises, this is a ride worth taking.

PrevPreviousAre the Oscars still too white?
NextFaith amidst the fireNext