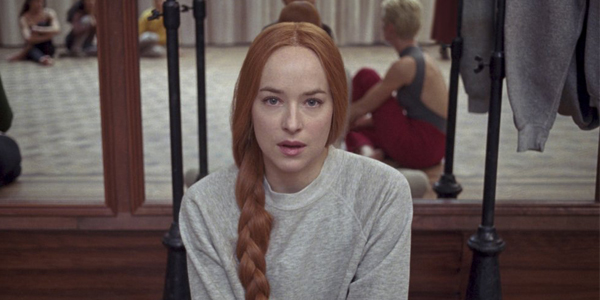 Suspiria is not an easy film to sit through. It is not recommended to anyone who cannot withstand brutal body horror (Insights saw at least two people leave the cinema during the screening). For those willing to subject themselves to its beautiful trauma, there are wider themes worth considering.

A remake of a 1976 Italian horror, Suspiria revives many of the filmmaking techniques from the original’s time period. It is a beautiful film, albeit with disturbing imagery and liberal splattering of blood. With its piercing visuals and depiction of injuries to the body, Suspiria’s horror largely stems from the impression of disgust and the constant creeping menace. With horror movies recently turning towards over relying on jump scares, this is welcome, but likely to be of little relief to anyone that watches.

While its story is somewhat abstract, Suspiria ostensibly tells the story of an American girl named Suzy Bannion, who is accepted into an exclusive dance academy in Munich. Bannion manages to impress Blanc, the creator of the ritualistic Volk routine, and becomes the protagonist in the piece’s upcoming final performance.

Fans of Radiohead will be delighted with the soundtrack, written and performed by Thom York. Like many other aspects of the film, its presence is sometimes overwhelming and adding to the overall horror.

Body horror oftentimes takes wider trauma and historical horrors and represents these in tangible ways. Last year’s Get Out represents the trauma of black American history. Suspiria makes constant overtures to the terrors of Nazi Germany and uses the 1977 Lufthansa hijacking as a framing device. Although it is never said directly, it is often hinted that supernatural events taking place in the film cause these events from behind the curtain.

Much like Get Out before it, Suspiria embodies the trauma of a nation, representing so much of the past (and at the time of the original, the recent present) trauma that Europe had gone through. It represents this in ways that are increasingly horrible and yet at the heart of it lies a love story. Dr Joseph Kemperer, the psychologist who treats Patricia is unwavering in his thirty plus year struggle to find his wife, who was separated from him during world war two. This links with the film’s overall horror in ways that enter spoiler territory.

The film is likely to generate its share of Oscar buzz. Tilda Swinton’s performance is not limited to one character. When the film was first announced, its marketing suggested that Dr Joseph Kemperer would be played by Lutz Ebersdorf. This elderly actor does not actually exist, a ruse that may have proven to be convincing. Swinton is unrecognisable under layers of makeup and manages to pull off the role in a way that is not distracting. Swinton’s remarkable performances are not the only ones worth talking about. Between Suspiria and Bad Times at the El Royale, Dakota Johnston well and truly stepped out from Fifty Shades of Grey. Her performance here is layered and multifarious. Chloe Grace Mortez is somewhat underutilised in her role as former academy member Patricia, but manages to deliver when she is on screen.