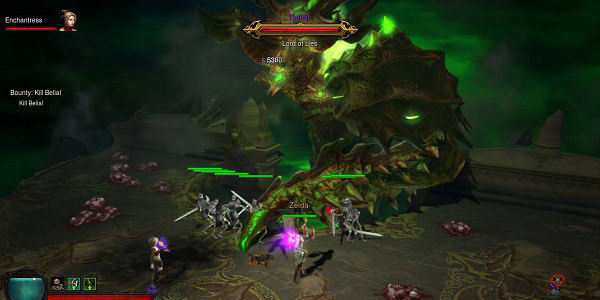 Since its initial release on PC in 2012, Diablo III has been reissued on various consoles. Its latest iteration on the Nintendo Switch takes every part of this complex tale and seamlessly brings it to Nintendo’s hybrid system.

While Diablo’s lore runs deep and features references to Christianity through the series’ characters and place names, these are incidental and part of an iconographic mish mash. Players fight through cathedrals and will recognise the odd reference to Christianity. What is really interesting, however, is the way Diablo III’s dialogue occasionally dips into discussion about the nature of faith. As might be expected from a dark medieval fantasy game, some of the characters fit a fundamentalist narrative of religion, obsessing over ancient prophecy. Others remain skeptical, even as they find themselves fighting wave after wave of demons. This dynamic, multiple characters looking at the same game world from different perspectives, is perhaps the most interesting aspect to the game’s story and should make for interesting discussion among the teams who share the experience.

Diablo III is fun played alone, or with up to three other players. The multiplayer modes include both online and couch co-op. Dispatching wave after wave of ridiculously plentiful enemies makes for a fun exercise in teamwork. Diablo III’s controllers are intuitive, with the Switch joy con working well as a controller.

Players can choose from one of several classes of character, ranging from the hand-to-hand combat of the barbarian all the way to the priest. This variety ensures that everyone has a role to play in team battles. As all of this sounds, Diablo III is a violent game, with demonic enemies’ blood spraying everywhere at points. This violence is mostly cartoonish, however.

Insights tested Diablo III’s game in handheld and docked modes. Both looked impressive, constantly running smoothly without a hint of slowdown. It is a testament to the game’s team and the power of the Switch that it constantly looks great.

The Switch port of Diablo III collects all the previous DLC and offers some exclusive items. More importantly, the portable mode adds something altogether new in the ability to take the game anywhere. As such, it is highly recommended for fans of dark fantasy and anyone looking for a multiplayer experience to share with friends and family.

Diablo III: Ultimate Edition is rated MA 15+ and is now available on Nintendo Switch. It is also available on PC, Xbox One, and Playstation 4.