Home
Features
General Secretary
Yes, but… what about Easter

Yes, but… what about Easter

When I was younger, a long time ago, I was in the habit of collecting words and sentences which caught my attention in a notebook. I later learned that such notebooks could be called ‘commonplace books’ but mine was not nearly that important.

The following caught my attention in the year I did the HSC: ‘…Never say but… It is not only one of the ugliest words in the language, it is also a singularly depressing word, connoting irresolution and heard upon the lips of those who are half-hearted in their undertakings, unhappy people who never go the whole hog, and with whom I would be grieved to see you ally yourself…’

Sadly, I didn’t write down who wrote that or where it came from, but I still appreciate the sentiment. I recognise the exasperation that can arise from encounters with the ‘yes, butters’.

For Easter people, in the season of resurrection, there’s no place for ‘yes, but.’ Easter requires a different grammar. Try these sentences:

Christ is Risen!
Yes, but we’ve always done it like that.

He is risen indeed!
Yes, but there’s no need to get excited.

Alleluia! Alleluia!
Yes, but don’t forget to put the bins out.

The ‘yes, butters’ are trying to live in two worlds – in the ‘yes’ world of Easter, and in the ‘but’ world of life as we’ve always known it. Irresolute and half-hearted, it’s hard to imagine ‘yes, but…’ changing the world anytime soon. And yet, at Easter, the world was changed forever. At Easter, God took all the violence, grief and hopelessness of the world and transformed it into life and joy and hope — into the freedom to live in an open future.

In the world of drama improvisation, the action begins when a group of actors arrive on stage without a script and without any costumes or props. They’ll work together to build a play out of thin air with no pre-planning or discussion and all the dialogue and action will arise entirely on the basis of ‘yes, and’. Basically, accepting what’s being offered and then adding to it to create the emerging story. Not unlike the little improv dramas that Jesus plays with various people in John’s Gospel.

Think of the story of Jesus and Nicodemus, or Jesus and the Woman at the Well (Nicodemus was a bit of a ‘yes, butter’ but he got it in the end). Easter people are ‘yes, and’ people, making the world responsively.

Forty years on in the journey of the UCA pilgrim people, it might be time to reflect on whether we’re living in the ‘yes, and…’ world of Easter or if we prefer the half-hearted half-light of the ‘yes, buttery’. 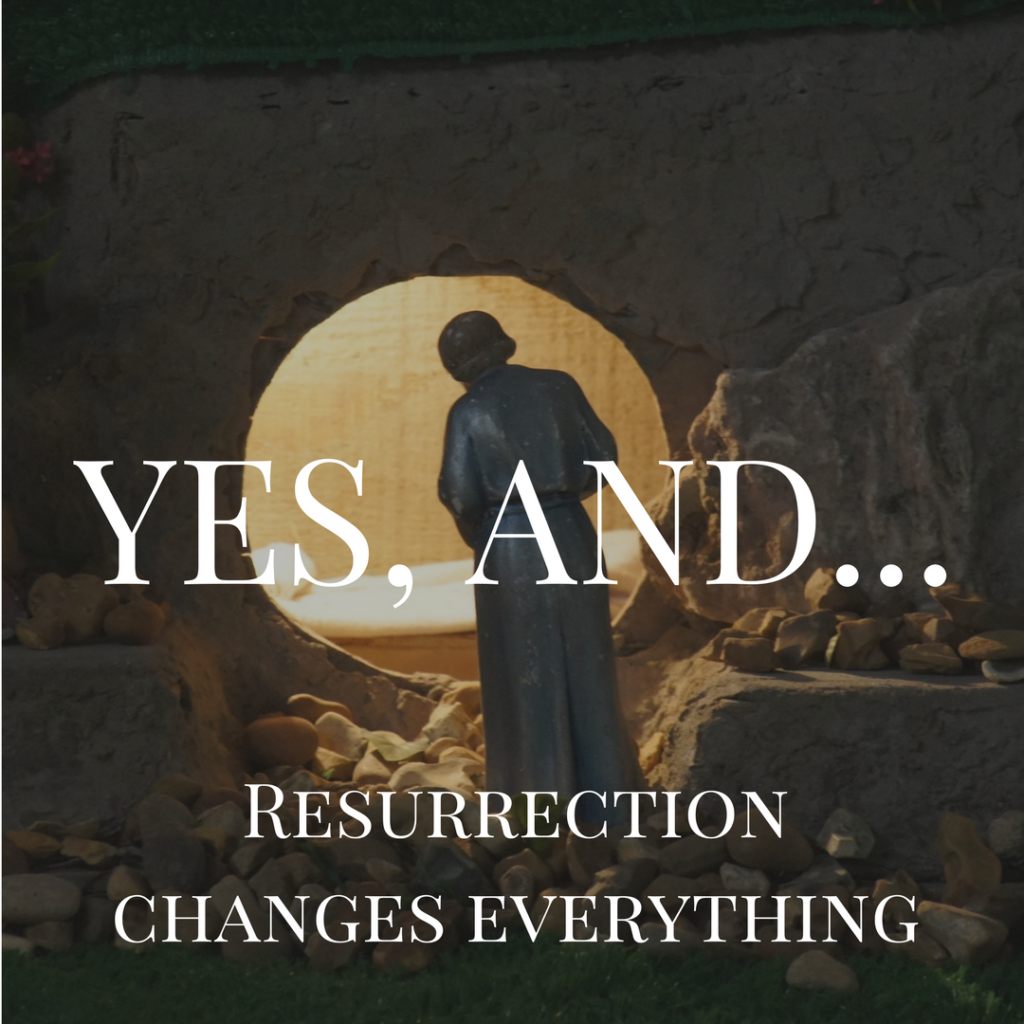 Here’s how I see it:

The Church’s call is… to be a fellowship of reconciliation, a body within which the diverse gifts of its members are used for the building up of the whole, an instrument through which Christ may work and bear witness to himself…

Yes, and… that means we have to get our safe church, safe ministry act together…

Yes, and… it also might mean that we give attention to the ways in which a ‘reconciled/reconciling’ community might function effectively…

Yes, and… that means that the diverse gifts of all the members actively give voice to God’s resurrection ‘yes, and…’ story…

After Easter, there is no business as usual, no script and the pilgrim people will make the road by walking it. After Easter, we’re in a whole new world. Resurrection changes everything.