Home
Reviews
Listen Up
What Future Do We Owe Veterans?

What Future Do We Owe Veterans? 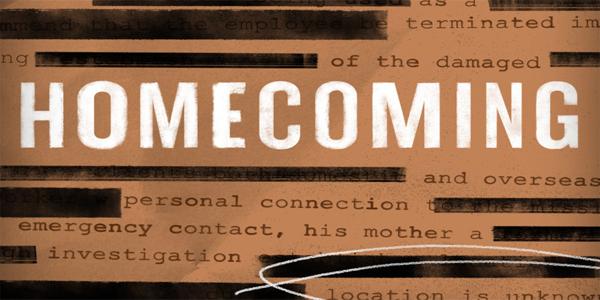 The popularity of narrative-based podcasts has exploded in recent years, with the likes of Serial contributing to this. The concept of a serialised, audio based story obviously has a longer pedigree, dating back to radio dramas. Gimlet Media’s Homecoming is one of the more interesting entrants into this recent reclaiming of an older concept.

Catherine Keener voices a psychologist attached to the mysterious Homecoming project, a study into the psyche of military veterans returning from war. During the course of her work, she encounters Walter Cruz (voiced by Star Wars’ Oscar Issac), a veteran struggling to make his way into a world apart from war. Friends alumnus David Schwimmer helps round out the cast as Catherine’s smarmy supervisor, who is keen to keep the truth of the project concealed.

The desire to avoid spoilers means that much of Homecoming’s emerging storyline cannot be described. Suffice to say, there are twists and turns and the surprises are genuinely there. The story jumps between three time periods, including the duration of the project, the aftermath, and the present. Homecoming manages to inspire a sense of constant underlying paranoia through all three of these strands. The story touches upon themes as the military-industrial complex and how society treats those who have sacrificed everything for their country.

The sound effects, vocal cast, and music demonstrate the podcast medium’s capabilities and are with polished production values. The inability to see the actors adds to the shows mystery (and is something of a necessity to keep one particular subplot moving).

At around 20 minutes each, the runtime of each episode is enough to keep your attention throughout. Listening to the show during my commute to and from work, I found myself quietly wishing my commute was long enough to finish a second episode.

With Amazon having recently ordered two-seasons of a Homecoming TV adaptation, with Julia Roberts attached as the lead role. Readers may expect to hear more about the show. As a concept, it is perhaps better enjoyed in its original format, and should be appreciated as such. Gimlet Media’s Co-founder Matthew Lieber says that he wants the company to be, “the HBO of audio.” Shows like Homecoming demonstrate how they may achieve this goal.

Seasons one and two of Homecoming are currently available on Apple Podcast.

PrevPreviousThird time’s a charm: Ragnarök is thunderously entertaining
NextI wanted to be a flight attendant but God had other plansNext