Home
Reviews
Press Play
We Are OFK Is Okay

We Are OFK Is Okay 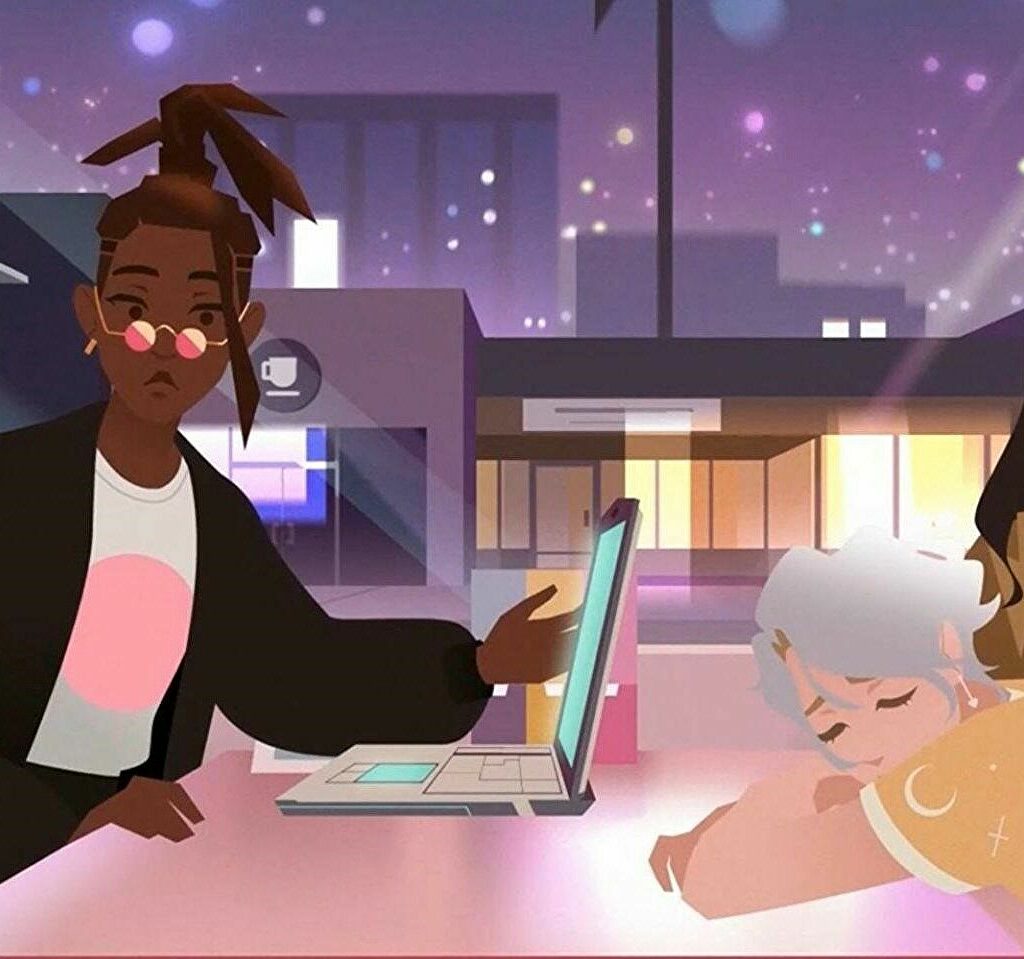 Review: We Are OFK

We Are OFK is something genuinely new and different. It’s an episodic story-based game about a young LA band as they prepare their first EP – but the EP is real, releasing alongside the game’s episodes, and each track is also presented as a playable minigame at the culmination of the five episodes. This is a mixed media release, a game about an album and an album that tells the story of the game. It’s a clever bit of marketing for the band. Looked at separately from its marketing, We Are OFK is a pleasant little game about growing up and following a dream, if not a particularly deep experience.

The mechanics of We Are OFK are extremely simple. You take control of the four members of the band – manager and pianist Itsumi, vocalist Luca, visual effects maestro Carter, and producer Jey – and guide them through their lives over the course of the album’s development. Well, sort of: gameplay boils down to making light conversation choices, both in person and via text messaging, and none of those choices feel particularly tied to the album itself. You spend a lot of We Are OFK‘s runtime reading text messages between characters, and nothing you do has an impact over how the story unfolds. This is essentially a lightly interactive mini-series, and should be accessible to players of any skill or experience level – do not expect to be challenged.

For the first half of the game, I found the game’s approach to be very shallow. Playing We Are OFK can be akin to trying to talk to someone who keeps pulling out their phone to check their texts, and the dramas the characters face feel overblown or are resolved too easily. The game presents a band of struggling artists, but then frames their “struggles” as largely ideological: success will come naturally if they can stop sabotaging themselves. If a character loses a job, they simply need to swallow their pride and take another job that is offered immediately; if someone is unsure of their musical talents, everyone they talk to will offer boundless assurance. At times, it feels naive and self-congratulatory, with the game so frequently telling you how great this band is.

But slowly, over the course of its five hour run-time, We Are OFK won me at least partly over by showing some growth and maturity. As the story goes on, the characters deepen, their personal philosophies and struggles coming to the forefront. I didn’t warm to all of them, but episode four’s sidetrack into Carter’s backstory was a personal highlight, digging into a character with some more nuance and delving into multiple perspectives on a complicated situation.

We Are OFK is also unapologetically queer, which is ultimately the game’s greatest strength. For all its faults and simplicities, many players will likely see themselves and their communities reflected in the game in ways that are rare and powerful. The characters represent a spectrum of sexualities and genders, and it all feels completely authentic. It’s wonderful to see a game world in which queerness is simply a given, and not a subject for debate or an object for oppression.

The music is obviously a big selling-point in We Are OFK, and mileage will vary on how good it is. The five songs on the EP are fun and poppy, with the song at the end of episode three (Infuriata) being a standout. This band isn’t going to set the world alight, but there’s definite earworm potential. Unfortunately, the promised interactive music videos are all varying degrees of superficial – the interactivity is very light, as you can control characters but cannot impact the music. In some, the interactivity is so paired back that you might as well put the controller down and try to enjoy the song. Don’t expect something on par with Simogo’s wonderful Sayonara Wild Hearts.

The name We Are OFK also comes pretty close to serving as a three-word review of the game: this is okay. It’s overly simple and dramatically inert in places, but it’s endearing to see a game wearing its heart so firmly on its sleeve. At its best, this game is a nice reminder of the value of being authentic and following your passions – that’s just not necessarily a particularly deep message.

We Are OFK is releasing episodically on PC, Nintendo Switch, and PS4/PS5. The season will be complete by 8 September, and all five episodes were made available for review.

PrevPreviousSeptember: You will not fear
NextExperiencing God: What do we actually mean when we speak of God?Next