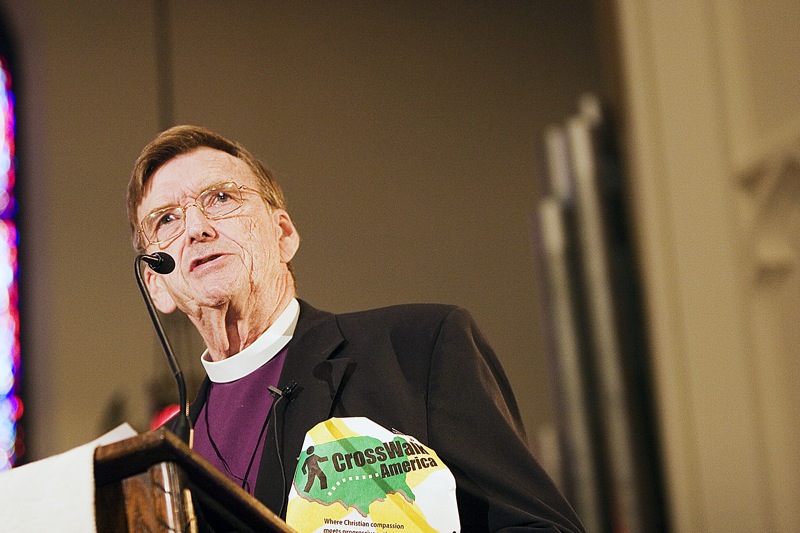 Controversial author and bishop John ‘Shelby’ Spong passed away in his sleep on 12 September. He was 90.

Bishop Spong was the author of dozens of books, including Jesus for the Non-Religious, Why Christianity Must Change or Die, and  He was ordained as an Episcopalian Priest at the end of 1955. He was later consecrated as the bishop of Newark in June 1976. He held this role until his retirement in 2000.

Tributes have flown in for Bishop Spong, who was an early advocate for a more progressive and inclusive Christianity that embraced women and LGBTI people into the life of the church.

The Westar Institute, Home of the Jesus Seminar, issued a statement that, “His work and witness have inspired and freed many Westar members and a generation of thoughtful people. May his memory be a blessing.”

Bishop Spong’s approach to scripture and those who disagreed with him saw him become reviled in some theological circles, however.

For example, he believed that the virgin birth was a purely symbolic event and “no big deal” when it came to Christian faith.

Spong viewed Jesus’ resurrection in a similar way. In an interview with Religion News Services, “I don’t think the Resurrection has anything to do with physical resuscitation.”

Against this point, Sojourners founder Jim Wallace said that, for whom the gospel remains a dangerous claim on their lives, he resurrection is a vindication that a metaphorical approach would deny.

[T]hat debate is often a mostly intellectual one, with heady arguments flying back and forth, and usually ends up quite unresolved. Their sincere question prompted a different response in me. I simply asked a question back: “In the heat of South Africa’s oppression and the heart of apartheid’s despair, do you think that a merely metaphorical resurrection would have been enough for Desmond Tutu? It wouldn’t have been for me.” Mere intellectual debates aren’t enough when it comes to faith. It is what we face in our real lives and in the real world that has the most capacity to deepen our faith.

Bishop Spong worked during his time as an Episcopal priest to, in his terms, place scripture into its historical and literary context, moving away from a literal understanding of the event. He says that this approach to scripture saw attendance at his church grow.

Despite this, the Diocese of Newark’s membership levels halved during his episcopate, according to the diocese’s records.

Insights interviewed Bishop Spong during a promotional tour in 2007. At the time, he expressed contentment with his life, which involved a busy speaking and writing schedule.

However, the visit had been the subject of controversy, after then Anglican Archbishop of Sydney, Peter Jensen, banned Bishop Spong from appearing at any of the diocese’s churches.

Uniting Church theologian and With Love to the World Editor Rev. Dr John Squires wrote that, while he disagreed with much of what Bishop Spong wrote, his ideas deserved to be engaged with thoughtfully.

“We can’t avoid grappling with the important ideas that these scholars advocated and explained. Both demythologisation (Bultmann’s key idea) and existentialist theology (Tillich’s central contribution) need to be engaged with, explored, and critiqued—not just dismissively brushed aside with slogans and stereotypes,”

“At the end of his life, let’s acknowledge the fine work that John Shelby Spong did in popularising and making widely known an extensive set of insights about what it means to have an informed faith that “makes sense” in the contemporary world; and let’s give thanks for his ministry of deepening and broadening the whole Christian exploration of scripture, faith, and discipleship.”

PrevPrevious‘The blood of Jesus is my vaccine’: how a fringe group of Christians hijacks faith in a war against science
NextThe shifting sands of COVID and our uncertain future has a name – liminalityNext