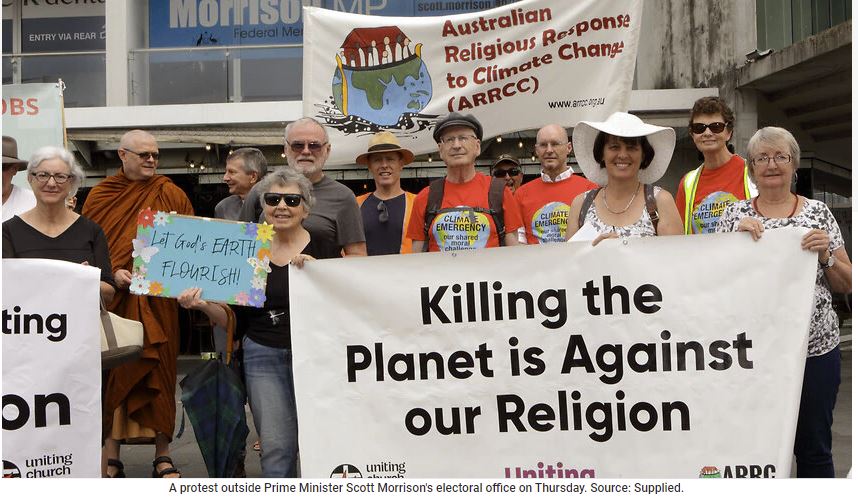 Congregations from Sydney’s CBD to Tamworth made noise with their voices and musical instruments on Thursday 11th March to highlight a new global statement and demands of PM Scott Morrison for climate justice.

Australian signatories to the statement are calling on Scott Morrison’s Government to submit higher emissions reduction targets that are in line with a net zero target by 2030 this year in the lead-up to the crucial COP26 negotiations in Glasgow, according to ARRCC which is part of GreenFaith International.

Every place of worship on Earth was invited to take part.

The Moderator of the Uniting Church in NSW and the ACT, Rev. Simon Hansford, said we have a responsibility to care for God’s creation and to advocate that governments take significant and decisive steps to reduce emissions nationally, while also addressing our nation’s accountability for contributing to global emissions.

Ahead of the event, the Moderator said that congregations would be raising their voices with bells and bagpipes and song in harmony with faith communities across the nation “to ensure our support for urgent climate justice is heard loud and clear.”

“The UN Climate Change Conference in November is another opportunity for Australia to do the right thing,” the Moderator said.

“We are on a path to food shortages and ecosystem collapse as early as 2030 and as a leading coal and gas exporter, Australia is a major global contributor to emissions.”

“Our Australian communities include some of the most vulnerable people who, we know, will be disproportionately affected.”

“There are environmental, scientific and economic solutions and we are urging those in power to be courageous. Appropriate action taken now will encourage our Pacific neighbours, urge others to take further action and have hopeful consequences for the world in which we live,” the Moderator said.

The Uniting Church NSW.ACT has a long history of climate and environmental action, encouraging reductions in individual and household emissions and divesting from fossil fuels.

The Uniting Church began divesting from fossil fuels in 2014, which was completed by 2017. It now manages $1.6bn in ethical investments that are aligned with the UN’s Sustainable Development Goals.

This story in the news: