Home
Features
The power of laughter

The power of laughter

Hannah Boland has been dubbed Australia’s “clean comedian”. But she discovered years ago that her funny bone was a way of dealing with setbacks which began in childhood with chronic pain, and into adulthood with the loss of two babies. As a Christian who was climbing out of post-traumatic stress disorder and clinical depression, Hannah felt an undeniable calling to use her well-honed sense of humour to give others a glimpse of a hopeful future.

Ahead of her keynote speech at this year’s Synod, Hannah discusses her ministry and gift for creative storytelling – in her own words. Sharing a lot about why she does what she does, Hannah confesses that “whenever I perform, my hope is always that people will be blessed with the gift of laughter… and that God will use it for his glory.”

The work I do, basically, is in two parts. There is the ministry side of what I do which is working specifically with churches, doing outreach events or speaking at churches. The second part of what I do is work in the secular industry – still as a ‘clean’ comedian and an unashamed Christian, but it’s for a different purpose. A lot of that is to do with my own professional development as a comedian.

I find Christian audiences and churches can be quite a bit more brutal than the secular industry because everybody has a different idea of what it means to be ‘clean’ and the line you have to tread. I often play it extremely safely with the churches and I’m glad I have because I have had very, very few complaints.

Christians do need to get over themselves a little bit, though, and not be so stuffy — but you have to get them to trust you before you lead them along that path.

In the secular industry, not only are people delighted to find out that a Christian can be funny, there is the opportunities I have to be a Christian presence in an industry that is so anti-gospel, anti-Jesus. I can get to be a living example of the gospel in those situations, which is tremendous and so desperately needed.

If I am doing a show that I am touring around, the material is pretty much sorted. It’s well rehearsed and I know it backwards because that’s the only way I can pull it off. That gives me scope on stage to play around with things a little bit more and to have a bit more fun with it — because I’m not worried about forgetting my lines.

If I have had a chance to prepare properly and it’s all fresh in my mind, I love performing and I’m not nervous at all. I’m just eager to get out there and have a really good time.

Before a stand-up gig, I have had everything from just 30 seconds to try to do my hair and put on a full face of stage make-up, to hanging around for an hour and a half, twiddling my thumbs, waiting for it to happen. I’m not a nervous back-stager; I’m quite happy doing a bit of crochet if I’ve got the time.

By the time you see me performing in front of an audience, that’s the last five per cent of what I do. For me to write about 80-90 minutes of material, that’s usually an 18 month process. Generally, comedians want to hop from one thing to another, to keep it interesting. So, in a 90 minute show, you can easily discuss 60 different topics. They’ve got to be quick and punchy and it’s a very intense form of writing. I probably throw out about 50 per cent of what I write. 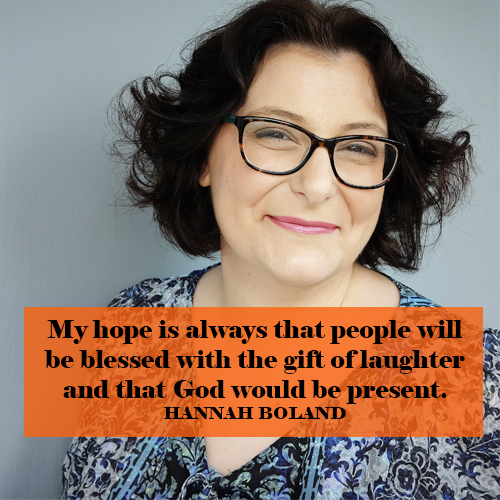 I do try to be open to my Christian convictions, and whether I have crossed the line a bit too much or there are topics I need to stay away from. I still pray about that and try to get a second opinion on that from a Christian. Like any job, though, you get a feel for what’s working and what’s not. But whenever I perform, whether it’s to a secular audience or Christian, my hope is always that people will be blessed with the gift of laughter and that God would be present. And that he would do whatever it is he does through whatever it is I do —and that he would just use it for his glory.

Most comedians would do Open Mic nights to test their material. I don’t have the luxury of doing that because I live in semi-rural New South Wales – I live in the Southern Highlands – and I also have young kids and health complications.

Even now, the first time that I do a new show, a lot of the material is untested. I tweak as I go but that can be really hard, because different audience members laugh at different things. If one or two jokes bomb, you just move on. You can’t dwell on it. If you can keep the momentum going and the audience is with you, they can forget about the joke that bombed if you do.

If you have a really tough crowd, I tell you, it’s like pushing sand up hill. You’ve got to put your head down and get through it, just like any bad day at the office. But if you are tanking night after night after night, then there is obviously something wrong with your comedy!

But one of the nicer things about doing ‘clean’ comedy is that the audiences you tend to have, especially the church audiences, are pretty kind to me. Usually the heckling I get is very nice, very complimentary.

During my show, I do some stand-up and storytelling but I also do songs, poetry and I sometimes do skits. I’ve got a bit of an ‘old lady’ sense of humour; I’m only 35 but I would absolutely die in some of these hipster, trendy, cutting edge clubs, because that’s not my humour.

Still, it’s a real challenge for me to get up there and do this ‘old school’ type humour, when everyone is trying to be so cutting edge – doing all the political jokes and things that are so modern and culturally relevant to a particular age group.

It really is quite scary to get up there and do this sort of style of humour but the wonderful thing is I have had so many people who love it – and be surprised that they love it.

I get these guys who run the technical stuff at clubs – these big, burly guys who watch foul-mouthed comedians or rock concerts; they’re really hardened guys – and after the show they shake my hand and say, ‘I cannot believe I laughed for 90 minutes and you didn’t swear once or have sexual innuendo.’ They’re so staggered that they’ve enjoyed it.

For more information about Hannah and tour dates go to www.hannahboland.com.au