Such an ambitious undertaking! 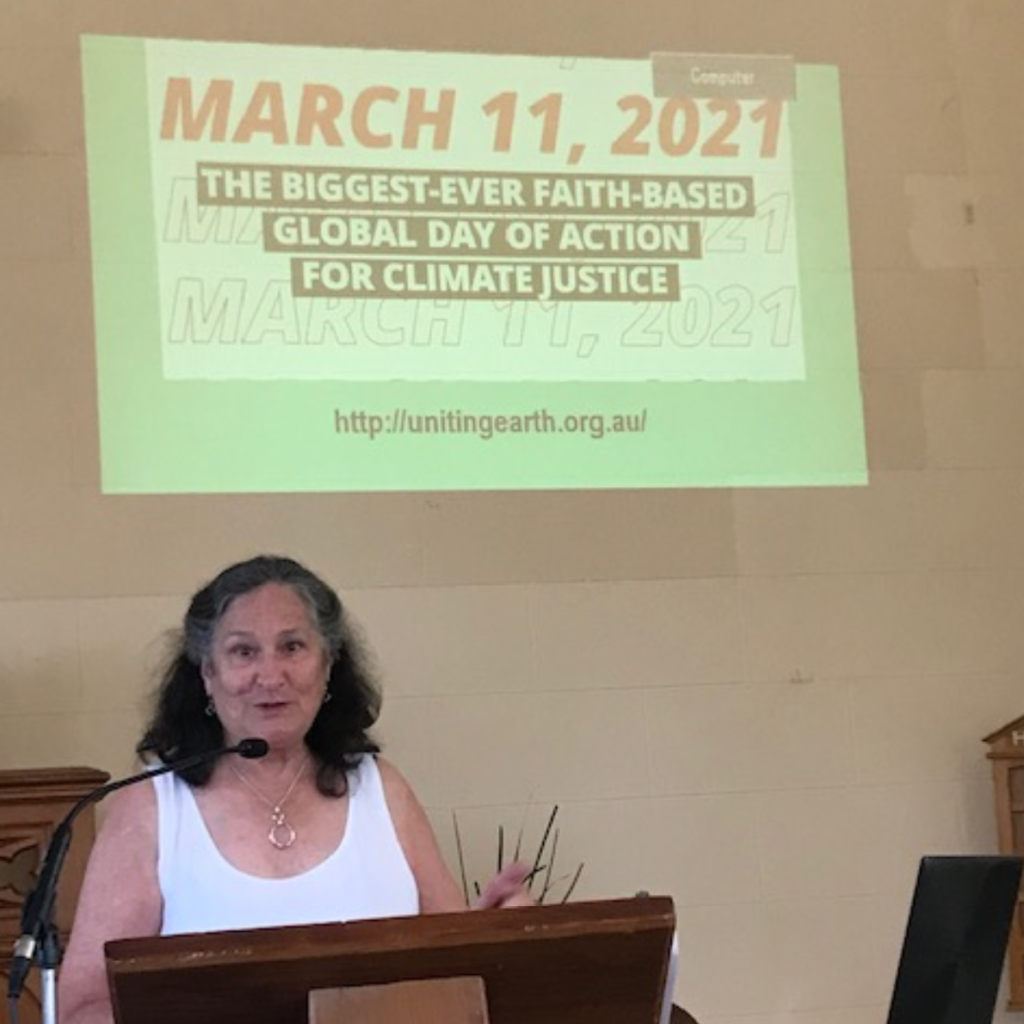 Virginia Handmer of Rylstone Uniting Church heard about the Green Faith day of action last November and joined in one of the first zooms about the event and signed the statement with her Church.

“This was such an ambitious undertaking!” says Ms Handmer, “Climate Action by people of every faith — and anyone interested but who didn’t consider they belonged to a faith — in as many countries of the world as possible!

#Faith4Climate, #SacredPeopleSacredEarth and the Uniting Church’s ‘#DestroyingThePlanetIsAgainstOurReligion were the hashtags to spread the word and raise the voices of people of faith.

The Rylstone Uniting Church congregation decided to hold a bell ringing event on the 11 March and painted a banner and spread the word.

“While we didn’t get a big roll up, lots of people talked about the event and the importance of Climate Change and Climate Action,” says Ms Handmer of their action.

“There will be many events planned in the lead up to this conference that other churches will be able to get involved in,” says Ms Handmer. “GreenFaith International and ARRCC (Australia’s Religious Response to Climate Change) are working together and welcome anyone wishing to join with them.”

Ms Handmer read out the following statement on 11 March:

We are united by a fundamental belief that all people, all living things, and the Earth are sacred.   As we consider the state of the world today, our hearts overflow with concern.

We are frightened and frustrated by the damage that COVID-19 is inflicting on world communities.

The pandemic has revealed cruel injustices. The vulnerable suffer the most severe impacts. We know about this injustice. We have seen it before. These same communities are disproportionately and catastrophically affected by the accelerating climate emergency.

Grave threats are at our door as the world shelters in place. We see the rise of increasingly unaccountable or authoritarian governments, exploitive economies, and extremist cultural forces which pit us against each other, target women and oppressed communities, and foster doubt about the science required to save life on Earth. This is a world of widespread poverty, racial and gender injustice, massive income inequality, and the devastation of nature where civilization is unsustainable at every level. Worse impacts lie ahead if we do not act now.

A far better future is possible if our collective response to the pandemic and the climate crisis is guided by compassion, love and justice at a scale that meets this moment. We must not only provide the relief that so many need to survive. We must create a new culture, politics and economy of life that heals people and planet.

We envision a world transformed, in which humanity in all its diversity join in building resilient, caring communities and economies that meet everyone’s needs and protect the planet. The era of conquest, extraction, and exploitation has given way to cooperation and community. It is a world of flourishing life that replaces despair with joy, scarcity with shared abundance, and privilege with justly distributed power.distributed power.

The work to create this future begins now. In the months ahead, governments and financial institutions will spend massive sums in response to the pandemic. Governments will present climate commitments at COP26 in November 2021.

These actions must not perpetuate an outdated economic system that relies on fossil fuels and the destruction of the very forests, waters, oceans and soils that make life possible. Instead we must accelerate renewable energy development; ensure universal access to clean water and air, affordable clean energy, and food grown sustainably; create jobs paying family-sustaining wages to workers in safe conditions.

Wealthy countries must take responsibility for a larger share of emissions reductions to support a global just transition. We must also prepare ourselves to welcome those who will be displaced by COVID and climate change.

Compassion, love and justice require no less of us all.